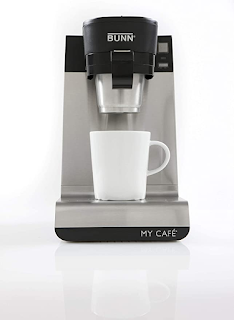 Coffee makers with pumps are probably a bad idea.

It has been a couple of months now, and our $9.48 coffee maker from Walmart is still going strong.  Cheap coffee makers seem to be the best kind - making the best coffee at the lowest possible price.  Want a better coffee?  Buy better coffee.  The maker is less important than the beans you put in it. And no, I don't think coffee-in-a-cartridge is going to be the best beans.

As I noted in a previous posting, they were throwing away a fancy BUNN machine at the pot shop, and after it sat there for four weeks with no takers, I decided to give it a new home, at least temporarily.

I have had previous experience with BUNN makers, and while expensive and well-made, they are a little quirky.  We had a BUNN-O-MATIC, the home version, which like the "home version" of any game show (the consolation prize) isn't quite the same thing.  At the old-fashioned Diner, the waitress named Flo, who has enormous breasts, offers to "warm that up for ya, hon!" with a carafe from a BUNN-O-MATIC coffee maker (or an old natural-gas fired job, I-kid-you-not!), which is a stainless steel monster that brews three pots at once and has three warmers as well.  It is piped into the plumbing, and has a tank that stores heated water, so when you press "BREW" it starts making coffee right away, with no messing around heating up the water first.  The tank refills itself with water and heats that up, ready for the next pot.

The home version was a little different.  You poured water into it, and then it started brewing right away.  And I mean right away.  Hot coffee would start pouring out the filter the second you started pouring in cold water.  So you used a pitcher of water (provided) to fill it, and left the carafe in place.  Of course, this meant you had to read the instructions first.

We went on vacation and asked a friend to look after the house.   She decided to invite 20 people over (none of whom we knew) and have a pool party.  No, we don't talk to her anymore.   She left a huge mess in the house, dishes in the sink, and glasses and plates all over - expecting our cleaning lady to clean it all up.  The cleaning lady ratted her out.   In addition to all that, she apparently spent the night (and God knows who else) and then tried to make coffee in the morning, shocked, no doubt when the BUNN-O-MATIC started spewing coffee all over the counter and down the front of the cabinets, as she poured cold water in the top using the carafe, as she did at home with her Mr. Coffee.  Not the best way to start the day, particularly with a hangover.   And no, she didn't bother cleaning that up, either.  What a cunt!

But that's why they call it the BUNN-O-MATIC.  Which part of "MATIC" didn't ya get?

Anyway, this one they were throwing away was called a "MY CAFE" model MCU, and the name cries to me of lonely lives of single people who can't afford to make a pot of coffee, because they have no one else to drink it with.  How sad.   The entire K-cup movement is this way, sadly.   The idea that you can make only one cup of coffee, either because there is no one else in the house, or because everyone today has to "do their own thing" and can't even share a breakfast beverage because they have picky, picky, "preferences" in life and cannot compromise on anything.   I suspect such folks end up living single in short order anyway.  Who gets custody of the Keurig?

Anyway, I took the darn thing and started to clean it - clay gets into everything and is hard to remove.  The machine works as advertised, but tries to do too many things at once. It has four attachments - one for "K-cups" one for teabags, one for coffee (in grounds), and one to make just hot water.  None were labeled as to their function.   So right off the bat, you see why it was not popular with the pot shop - no one could figure out how to work it.  I downloaded the 34-page (!!!) operating manual and "quickstart guide" (what is this, a freaking computer?) and plugged it in.

It is like our old BUNN-O-MATIC in that it has an insulated tank that is always hot, which means you have to keep it plugged in all the time (again, lost on the pot shop crowd).   You pour in eight ounces of water, press the "brew" button, it almost immediately spits out eight ounces of hot water.  Be careful though, because if you pour in 12 ounces of water, and there is only an 8-ounce cup in the receiver, it will overflow.  For some odd reason, the maximum size is an odd 14 ounces (not 16?).

It spits.  For some reason, it pees out some liquid, then does some more, and then toward the end, spits out hot water and steam, which splatters all over the face of it. You can hear some sort of pump running in it, just like the ill-fated Keurig machine I tried to repair. Not a good sign - a coffee maker shouldn't need a pump in it - unnecessary complexity!

But the funniest thing about it was something Mr. See pointed out right away.  Once I got it working and using the "tea" attachment, made myself a cup of tea, I tried to demonstrate it for Mr. See.  I said I would make a cup of tea for him, and he just said, "Well, why not just make a cup of hot water with it and let me steep my own teabag?"  Turns out, steeping the teabag was part and parcel of tea drinking for him, as you could make a second cup if you wanted to, or control the strength of the tea.  The BUNN "MyCafe" took all that away from him.

As it finished "brewing" the tea, he noted, "She spits a bit, don't she?"   I could see the poor BUNN die of embarrassment.

I suspect that in spite of the numerous attachments, that most of these are used as Keurig machines.  There is little point in going through the hassle of putting ground coffee in the "coffee" attachment to make just one cup.  And the tea attachment? Mr. See ripped that a new one.  And the "hot water" attachment?  What's wrong with an old-fashioned electric kettle?  I'll put the kettle on, dearie!

And therein lies the problem. I recall a comedian making an observational humor joke about microwaves.  In the old days, we'd put things in the oven and wait 30 minutes for them to cook.  Today, it takes only a couple of minutes in the microwave, but even that is too long!  "Come on, already! Cook, dammit!"  We need a microwave for the microwave!

The "time-saving" feature of this coffee maker saves a trivial amount of time - a few minutes at most.  The only real use I can see for these K-cup machines is in a public setting, where maybe you want one cup of coffee and not have to make a whole pot, which just goes to waste, if no one else wants any.  So yea, I can see where they might be useful in an institutional setting.  But for home use?  My $9.48 machine is a better bargain and works better.  A better bargain, even if you throw away unused coffee as a result.

One reason why the BUNN MyCafe was discarded was the owner was disillusioned with K-cups.  The Keurig people were not interested, it seems, in recycling used K-cups, which indeed would be a technological nightmare.  So in addition to all the other problems with cartridge coffee is the plastic landfill waste, which probably isn't that big a deal, but on the other hand, if you think soda straws are an issue.... K-cups!  It makes me wonder whether this whole cartridge coffee thing isn't just a fad.  Real coffee aficionados are not making their coffee from a cartridge.  They are grinding their own and brewing it fresh.  The guy buying $70-a-pound coffee isn't putting it in a Keurig machine - or the BUNN MyCafe, either.

The original owner of the machine told me it cost "$100 or so" which may be understated, as I see them sold on eBay for more. They no longer make this model, but the successor sells for hundreds of dollars.  And there was a time in my life I would have bought it - hell, I did buy it, or the contemporary version of it, what is now the "Speedbrew" home version of the stainless BUNN-O-MATIC of yore.  I didn't think a few hundred dollars was a lot of money at the time (duh!) and like so many coffee makers before it, it went to a garage sale or somewhere, eventually (It didn't seem to stay hot, over time).

The "always on" feature (which kept the tank at brewing temperature at all times) reminds me, in a way, of the AGA stove - the "stove that is always on!" - a neat concept and maybe practical in arctic climes, but impractical for the rest of us, like so much "professional grade" equipment.

Chasing tech is a fruitless occupation.  Sure it is neat when these toys work as advertised.  But often they don't, or cheaper, simpler technology works just as well, if not better.  We just came back from a three-week trip where I made my coffee every morning on a stainless-steel percolator heated on a hot plate (or Coleman stove) on the tailgate of my pickup truck.  And you know what?  It was damn good coffee!