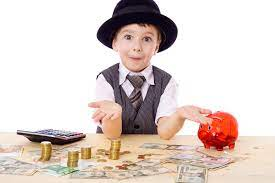 I wrote before, in my four-part series on Deductions and Tax Credits, how the dullards on the assembly line at General Motors would shrug off some horrendous loss made by the company with the saying, "Well, that's a write-off for them!" as if taking a deduction was somehow a way of making money.  It isn't.  It just means you don't pay taxes on expenses or losses.   These things still cost you money, unless your tax rate was 110% I guess.   But to them, it sounds all sophisticated and cool, and more than one Johnny Lunchbucket would sit back during "break" time (8:30AM to 11:30 AM) and pontificate about how "write-offs" made the company money.  It is like children playing with money.

And you wonder why GM went bankrupt.

"Cash-Flow" is another term people throw around and have no idea what it means.   In response to a posting many years ago (when I had comments enabled) about saving money, I got a comment from a would-be gangsta' (probably a 17-year-old from the suburbs) saying, "Yo, ya gotta keep yo cash-flowin' bro!"   I disable comments and now you see why.

But the term "cash-flow" is often used by con artists to separate you from your money.  The car salesman will try to talk you into a screwy lease deal on the premise that it will "improve your cash-flow" and most people don't want to embarrass themselves by asking exactly what they mean by that. So they nod their heads and go along with it. After all, you don't want a car salesman to think you are some sort of rube, do you?

Another outfit a while back was selling "Cash Flow Notes!" or at least a seminar on how to invest in these things, which from what I can ascertain, don't actually exist.  But if you pay them "cash-money" they will tell you all about it, and a little of your cash will "flow" to them.

Opportunity Cost is another term that amateurs like to toss around - as well as car salesmen and other con-men.  Again, most people don't have a clue as to what it means and whether it applies to them.  The car salesman, again, will try to talk you into a screwy lease, arguing that if you actually bought the car, you are "tying up all your money" in a car and forgoing the "opportunity cost" of investing it.  Of course, if the cost of a car seems like a big chunk of change to you, I might suggest you are buying too much car for your income bracket.

All of these terms have real uses in high finance - but not in personal finance.  Sure, if you run a business, you have to consider the opportunity costs of investing in Plan A versus Plan B - whether it is better to pay down corporate debt or invest in a new factory or buy-back stocks or declare a special dividend.   And sure, if you run a company, you may need to free up "cash flow" to pay your suppliers and employees.  And yes, you can write-off losses, but again, you don't make money on them.

In fact, it is probably safe to say that anytime someone throws some of these financial terms at you and argues they apply to your personal life, they are probably lying to you and you should keep one hand on your wallet.   They are throwing up a smokescreen and hoping you are too worried about being embarrassed by asking, "Well, what do you mean by that, exactly?"   And even if you did ask that question, they wouldn't really answer it, but spend a minute or two mocking you for asking.  "You don't know what cash-flow means?   How do you even know how to breathe?  I never knew there were people so dumb in this world!" And so on and so forth.  It is a classic power-shifting play, to make it seem like they are smarter than you and know what's best for you and you are a blithering idiot.

And by the way, whenever someone makes that play, you can bet they are trying to rip you off.

A reader alerts me to another situation where people are using financial terms to sell things that are basically rip-offs.  They are calling it "Passive Income" which is a term that has a specific meaning with the IRS.   But they are not using it in that sense - they are using it to sell a pyramid scheme:

A woman on a copywriter's forum I belong to has just given up her copywriting business to have a "sales-funnel" passive income business - supposedly teaching teachers to be freelance writers. (???!!!) From what she is writing on that forum, it sounds like she's getting bled dry by someone. She claims to be clearing $20K a month after spending $2000 a day ("Yes -a day," she wrote) on Facebook ads for her $5.90 intro e-book.
That math makes no sense to me and - from her posts - it gets even weirder. Her funnel was hot-hot-hot-HOT for 3 months. Now she says it's "stumbling." (!!!) I Googled for how she might be being scammed. Three articles were particularly good - 1) Passive Income: The Modern Pyramid Scheme by Tom Jessessky, 2) The Top 4 Reasons Why 'Passive Income' Is A Dangerous Fantasy by Michael Ellsberg and 3) Stop Chasing The Passive Income Lie! You've Been Told A Dark Lie About Hard Work by Marc Guberti.

It is, of course, the same old, same old, used since the dawn of time.  You can make something-from-nothing and that's how the big boys do it, so why not you?  Stop being a chump and working at a "Job" and trying to "save money" and take what little you have saved and give it to us.  Don't have anything saved?  Well, we accept MC and VISA!  Credit cards tapped out?  How about a home equity loan?  Don't have that?  Well piss-off, we can't use you.

I suppose that is one advantage of being dead broke - the scam artists leave you alone. 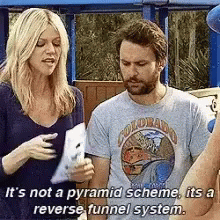 The comment about "Sales-Funnel" is particularly hilarious, as I have seen clips from the lame TeeVee shows where the boss tries to explain a pyramid scheme to his employees by calling it an "inverted funnel" - which of course, is just a pyramid.

It is the ultimate siren song - there is wealth without work or effort, if only you knew the insider's tips 'n tricks!  And thanks to generous millionaires, the will share this secret with you for only $2500 if you take their online seminar.  Act now!  The number of seats is limited and they are selling out fast!

"Want to make money while you sleep? Want to achieve financial freedom by creating passive income? I’ve done it, and now I’m giving my secrets away. Sign up for my FREE webinar where I’ll teach you the exact steps I used to build a SIX FIGURE coaching business.”

But no one gives away the goose that laid the golden egg - or even sells it.  If these guys were making so much money with this mysterious "Passive Income" then why would they tell anyone about it?  If you found a secret formula for making money, telling others about it would only destroy the magic.  If you can make money flipping houses, you'd do that, and not run seminars about how to flip houses.

Ahhhh... but that is the deal.  You make tons of money selling seminars and not so much money actually flipping houses.   There is more money to be made selling the idea of how to make money than in actually making money.

Sadly, these things end up causing a lot of pain for people - they divide families and people lose friends over this.  And no, you can't sue people for running these schemes - well you can, but you'd spend hundreds of thousands of dollars and likely even if you won, would not collect anything.

And what is really sad, is that when people get snookered like this, they rarely look inward and think about what they did to cause all this trouble.  They were too greedy.  They believed in something-for-nothing.  And of course, nothing was ever their fault.

It is sad - and scary - because people like that never learn, and often latch onto one ill-conceived scheme after another.  And when they go wrong, they never think that maybe they should stop scheming.  No, like my boring friend, they blame the Federal Reserve, or maybe the Democrats (or Republicans) or Immigrants, or minorities.   Qanonsense will save them!  White supremacy will turn things around!  Fill-in-the-blank-impossible-scheme will save the day!  Hey, when you start believing in impossible schemes, maybe that starts to make sense.

Maybe that explains part of the madness we see today.  People are sold this idea of something-for-nothing on Social Media and when it blows up in their face, rather than sit back and think about what fools they were - and vowing never to do it again - they join Qanonsense or Al Qeada or the Proud Boys.  It's nothing they did wrong, the system is broken!  Once Bernie and AOC are President and VP, all our student loans will be forgiven and Andrew Yang will fart out free money for all of us. Whee!  Free Ponies!

The "old school" values of self-reliance and taking responsibilities for your actions are, apparently, tossed into the trash heap.  But not for long - you can only deny reality for so long.  History has taught us that.