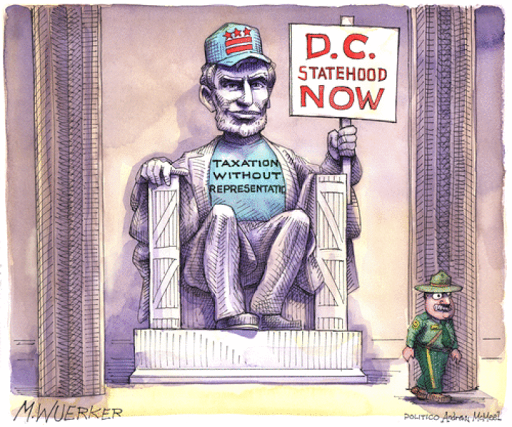 Making a city into a State is a bad idea.

Every so often, the idea of DC Statehood is bandied about.  Proponents argue that people living in the city of DC have no real representation in Congress or the Senate, although they can vote for President.  So they argue, DC should be a 51st State.  While we're at it, let's make Chicago, LA, New York, and any other city dominated by Democrats, a State as well.  Sorry, Houston!

That is what it comes down to - a power grab.  If you make DC a State, they get TWO Senators, which would tip the power balance in the Senate further in the hands of the Democrats.  I am not against that, but do it through legitimate means - winning elections, which Democrats can do, when they present themselves as centrists (sorry, AOC!) and when Republicans get off the leash and show their dark side (as happened January 6th).

Sadly, as I noted before, Democrats will screw up a wet dream when they get into power.  Republicans do the same thing.  If they lose an election, they claim that it was because they weren't radical enough!  If they win an election, they claim it was because people voted for radical change!  The reality is, people want predictability and stability in their government, not wild swings from right to left.   But those people, sadly, never vote in primaries which is how we ended up with Our Miss Margie in Congress, giving away guns this week to anyone who votes for her (just not bottled water, though!).

But without Statehood, how do you fix the raging injustice that is being visited on DC residents?  Well, first realize it isn't such a raging injustice.  Move a mile away, say across the river to Alexandria or Arlington, and you can vote for a House and Senate member.   Funny thing, that - both cities were once part of the District of Columbia, but were ceded to Virginia as part of a slave compromise (so that slavery would be illegal in DC).

So.... why not cede the District of Columbia to Maryland?   Then, like Baltimore or Annapolis, it would be a regular city and citizens there would have the right to vote for representatives and Senators - of the State of Maryland.  That might even add enough population to add a House rep or two to Maryland.  But you don't get your two Senators, doya?

That is the whole point of "Statehood for DC" - it is a power grab, plain and simple, and the proponents,who unfortunately dominate DC politics, will never consider an alternative such as becoming part of Maryland (what fun is that?), so DC Statehood will never happen - or at least it seems very unlikely.

Oddly enough, the threshold for Statehood is pretty low - If it passes both Houses of Congress and is signed by the President, a territory can be come a State.  There are two caveats, though.  First, if the territory is part of another State, that State's legislature has to approve the excise of its territory to form a new State.  The other caveat, of course, is the filibuster - which is preventing much of the non-financial programs of the Democrats from passing into law.   Sure, there is talk of abolishing the filibuster, but the Democrats know all-too-well how that would work out if (and when) the GOP regains power in the Senate.

But like I said, it is a bad idea, and the whole idea behind it is to increase representation of Democrats in the House and Senate.   No other city has a statehood movement, nor should there be one.  The Constitution was structured to prevent the dominance of urban areas over rural and vice-versa.  That is why Wyoming has two Senators and so does New York.  It is why we have the Electoral College, so that candidates who don't bother campaigning in the Midwest end up losing elections (Hello, Hillary?).

The DC government has a horrible track record of inefficiency and outright corruption.  While DC as a State would have the highest per-capita GDP and educational levels, it is not because the DC school system (which spends more per capita on education and has the lowest test scores) is so efficient or that the DC government well-run and honest.

I was in my office one night at Thomas Circle, back in the day, working late, and when I tried to leave, I was blocked by several police cars.  What was happening?  Well, the next day, I found out.  They were arresting the Mayor, who was smoking crack with a prostitute in a hotel next door.  Not only did he go to jail, the people of DC re-elected him as mayor.   Gee.  Swell.

The stories I could tell you about DC could go on for pages.  My friend who worked at the school system teaching kids to read.  She was assigned an "assistant" who was the principal's son.  He never showed up for work and there were no consequences.  Ghost Teachers - the "no show" job - strikes again.  And you want to know why your school taxes are so high.

Then there is the DC Motor Vehicle Department.  Want to register a car?  Take a day off from work and get there by 6AM.   Expect to get your tags by 5PM - if you are lucky.   Get a parking ticket?  Go to court, again, at 6AM, and maybe - maybe - you can plead your case that day.  Most people can't afford a day off from work to do this, so they pay the fine.  The Police know this - and issue bogus tickets all the time.  Paying for underground parking is cheaper than parking on the street.   Then there is the Department of Public works, which for some reason uses a very fine asphalt on the DC streets. Looks great for parades, but in the hot summer sun, it literally wrinkles up into ridges sometimes several inches high - and also forms mean potholes.   If you want self-government, shouldn't you first show you can govern yourself?

But the worst thing about this "DC Statehood" talk - and things like "Slave reparations" is that it will not only insure GOP victories in the 2022 elections, but perhaps a landslide in both the House and Senate. Folks in Pennsylvania, Michigan, Wisconsin, and other "flyover" States will be alarmed by these proposals, even if they are just window-dressing designed to appeal to the "base" of the Democratic Party.  They may placate Ms. AOC (don't count on it - people like her are never happy even if you declared tomorrow to be Karl Marx Day) but they will more than energize the far-right, and more importantly, the center - reasonable people who don't want to see unreasonable solutions.

Like I said, it is a pretty predictable pattern - each party gets into power and instead of consolidating power, screws it all up by pandering to extremism.  When the Republicans take over (again) they will screw things up by talking up Our Miss Margie's plan for cancelling free school lunches in favor of free school guns - all in bright primary crayola colors, for the kiddies!  Whee!  What fun!

You can bank on it.