Why Bullying Works on the Internet 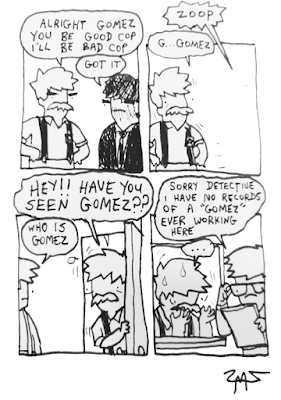 All it takes for evil to succeed is for good men to remain silent.

I was looking at comics online, which is a pastime of mine.  Some of these amateur comics are quite good.  Others, less so.  One of the better ones had a gag where two Police officers decided to play "Good Cop, Bad Cop" and the "Good Cop" instantly vanished, because, you know, there are no good cops!  Get it? Ha-ha, funny.   Well, actually kind of a lame gag.

Anyway, in the comments - another reason never to read the comments - someone said they didn't get it, and another person responded with a long-winded diatribe about how there were no "good cops" because the nature of the police state was to criminalize the citizenry and oppress them in order to maintain a power leverage... blah, blah, blah.

Somebody went to Kollege! No doubt this was what they were taught in school or on the Antifart website and now they were barfing this up as though it were gospel.   And of course, everyone chimed in with supporting comments and there was no dissent, whatsoever.

And of course, you know why.  If you tried to write a comment to say, "Well, there are good police officers, you just never hear about them!" you will be shouted down and on many sites, your comment "downvoted" so that it never sees the light of day.  And no doubt, this is by design - brigades of people, perhaps not even from this country, want to spread a narrative that our justice system is "broken" and should be fixed abolished.

Of course, these Internet philosophers are one stolen-bicycle from being law-and-order police supporters.  No, the Police are not perfect - no humans are.  But unlike a lot of jobs, in police work, if you make a mistake, someone could end up killed - maybe even you.  Which is why when I am pulled over, I am very cognizant to follow the officer's commands to the letter and keep my hands in view.

A recent tragedy occurred when a young man with outstanding warrants, decided to drive a friend's car with expired tags, and when pulled over tried to negotiate his arrest.  Sadly, the arresting officer mistook a pistol for her taser and now that young man is dead.   You make a mistake as a cop, people die.  And yet, you don't get paid much more than the guy working on the assembly line at GM.  Jobs that require that level of responsibility should be paid more.

Now some people want to make this out to be a racial thing.  "Well, that's all very easy for you to say, you're white and don't have to worry about being pulled over by the Police."  Well, I also have no outstanding warrants, don't drive friend's cars with expired tags, and I don't try to negotiate my arrest. Funny how that works - I don't end up getting shot.  A young black friend of mine has started acquiring a collection of firearms on the premise that if pulled over by the Police, he will fire first and thus survive.  I tried to explain the madness of this theory to him, but it fell on deaf ears.  The world has gone insane.

Yes, it is true that absolute power corrupts, absolutely.  And when  you are a Police Officer you have awesome police powers, including the power to arrest someone.  Not only that, you have the ability to get away with abusing those powers, as my Crim Law professor explained to us - no jury is going to convict a Police Officer unless the circumstances are particularly outrageous and well-documented.  So yes, there is a temptation to exceed your authority or indeed, common sense, on occasion.  That does not mean all Police Officers do this, however - or that we should abolish or "defund" the Police.

But all of that requires careful thought and analysis, as well as experience.  It is a lot easier to chant slogans and go along with shitty ideas.  And on the internet, the shitty ideas always float to the top of the septic tank.  Today we are having serious discussions about idiotic things like "slave reparations" and "guaranteed annual income" and "student loan forgiveness" as though we can just print more money - than we already are - and then just give it away to people, and the net consequences are, nothing.

Try to point that out to anyone on an online forum, and you will be shouted down.

But of course, it is not just Lefties that are shouting down contrary ideas - the right is just as bad, if not worse.  You try to explain to someone that the Covid virus is not a hoax and that vaccines don't cause autism and again, you are downvoted to oblivion, if not flamed, attacked, and threatened.  It just isn't worth it, to try to have a discussion with irrational people on the Left or Right, so most people remain silent, and as they say at BLM rallies, "silence is assent".  People assume that since there is no opposing view present, there must not be any opposing view.  It is group-think at its worst.  The bullies win.

And maybe that is why we are seeing the emergence of such radical thinking on the Left and Right. Since no one dissents at all (or dares to) the consensus on the Internet forum becomes more and more radical.   A site about conservative values slowly and inevitably veers off into Qanonsense territory. A site about liberal values leans into Socialism, Communism, or even Anarchy.   It is a predictable pattern.

But these radical voices are often tiny minorities, amplified by social media. The vast majority of people are either lurkers or don't visit sites, other than their own Facebook page.  So the vast "silent majority" of people - Conservative Democrats and Liberal Republicans - are never heard from.  We only hear from wacky Liberals and whacked-out Conservatives.  And since these are the only voices we hear, people think this is the majority view on things - or that we, as a nation, are "polarized".

Such is not the case.  I have friends who are dyed-in-the-wool Democrats and others who are staunch Republicans.  Yes, this is possible to do.  They are not Antifarts or Qanonsense followers.   While they disagree on a number of things, they agree on more than they disagree.   I know fairly liberal Democrats who, while sympathizing with the plight of students with loan debts, don't think that blanket forgiveness of indebtedness is the answer to anything. I know Republicans who are turned off by the far-right and Trumpism - and are not against gay-marriage or other "social" issues that many in the leadership of the GOP think resonate with their followers.  The idea that people march in lock-step to their extreme wings of their political parties is nonsense.

But these sort of folks don't have a voice online.  And if they did raise their voice, they would be quickly shouted down.  For some reason, social media and comments sections in particular, tend to favor radical views - again probably because they are so easily hijacked by external forces.  Yes, Russia.  They have a whole institution devoted to spoofing the Internet in the West.  Don't act like it doesn't exist, unless you are a Russian Troll (or a very, very useful idiot).

I am not sure what the answer to this is, as speaking up doesn't really work.  Unpopular ideas are voted down and disappear - so people never hear contrary ideas, other than those allowed by the owners of the platform.   The only "solution" I have, from a personal perspective, is just to avoid social media at all costs, and stop reading the comments section of any site.   I am kind of sorry I read even the two comments that accompanied that lame cartoon.

That might lower my blood pressure a notch, but it doesn't change the narrative online.  Good people remain silent and "don't want to get involved" because there is nothing to be gained by it and everything to be lost.   You can't blame people for looking out for their own best interests.

Maybe if enough people turn away from this nonsense, things would change.  But I highly doubt that will happen, anytime soon, if ever.