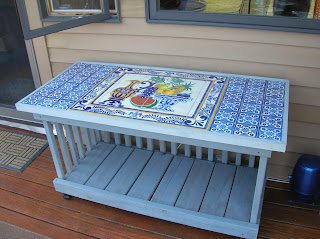 You can make nice things from old junk.  (And Mexican tile...)

A reader writes that old deck boards can be recycled to make new things, such as a step for a hot tub.  Way ahead of you!  In our house in New York, we had the deck rebuilt, and there was a pile of pressure-treated lumber to dispose of.  We could have paid someone to haul it away, but have you seen the cost of lumber lately?  It was in good shape, other than it was splintery (never pressure wash a deck!) and had nails in it.

But Mark got to work and made various things with it.  I made a frame for a pottery kick-wheel that someone gave us on Ithaca Freecycle.  It was just a wheel, shaft, head, and two pillow-block bearings. 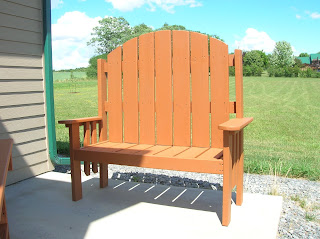 We went back to the house years later and these pieces are still in use!
Mark made Adirondack chairs, a bench (above), a table, a wedging table for pottery (the top is filled with plaster of Paris to absorb water) and a plethora of small benches, step stools, and yes, a hot tub step. 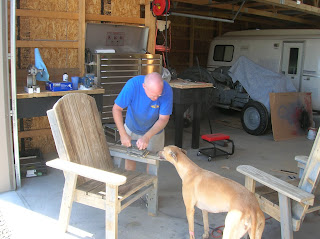 The craftsman at work, with assistant.
You'll note that the tools we used are not very sophisticated or expensive.  A power sander. A circular saw.  A jigsaw.  A screwgun. No table saw, planer or other tools of a "real" carpenter or cabinet-maker or whatnot.    But the end result was nice "rustic" furniture that was durable (and heavy!) as all get out.
Mark's Great-Grandfather was an amateur carpenter, and made small pieces of furniture even after he lost an arm in the lumber mill in Maine. We still have some of his pieces, including a nice end table which has the wood going width-wise rather than lengthwise.  When he went to get the wood from a friend, he was shocked to see they had cut it up into logs. "We thought you wanted it for firewood!" they said, so he worked with what he had.
Someone might mock such things as not being "professional" or "expert" and that's OK.  We have friends here on the island who have woodworking shops with tens of thousands of dollars of equipment, and they make amazingly crafted things.  The difference between the expert and the amateur is in the tools, it is said.  Well, that an experience and training.
But that doesn't mean you have to be an expert at everything just to try things.  Sure, it is nice to have neatly mitered joints and smooth finishes.  But then again, not everything in life has to be perfect, particularly a set of Adirondack chairs that will sit out at the dock, all year-round, even in the winter.
A lot of people would have paid someone to haul away that lumber, and then went to the big-box store and bought knock-down furniture made in the far-east from that weird lightweight wood that seems to rot apart withing a year or two - spending for what could be free.
And again, making and doing things is one sure cure for depression.  Learned helplessness sets in when people don't feel they can change their environment.  And no, whipping out a credit card isn't as satisfying as making something with your own hands, even if it is just a cake or something, and even if it doesn't come out "expert" or very good at all.
We used up all that lumber, and what scraps were left over went to the burn pile.  Our current project is taking a pile of shutters that were thrown away by the club hotel, and fitting them to the windows in our house.  The leftovers we are giving to a friend, or will be used to make plant stands or product displays.  Some half-rounded shutters (which came off Palladium windows) might make some interesting Adirondack chairs!  (The "Bahama" shutters we ended up taking down and installing inside).
So, once again, the circular saw and the sander get a workout.  Of course, it is nice to have a friend down the street with a table saw to cut them to length (and width).
Now, you'll have to excuse me, I have to get back to sanding shutters! (A PITA job if ever there was one - next to painting them, that is.....)
Newer Post Older Post Home