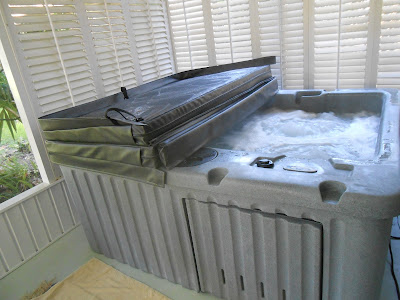 Hot tub technology is changing - no longer do you need an electrician to install a hot tub.

The name of this blog is Living Stingy, which isn't, as I noted in my first blog posting, about how to recycle pocket lint and save! - but rather how to live better on less.  And sure, a hot tub is a luxury of sorts, as is a pool.  But if you decide you have to have one - for valid reasons - then there are ways to go about it and save a lot of money, just like anything else.

A hot tub isn't some party machine, as the media paints it.  In fact, getting drunk and going in a hot tub is a bad idea - alcohol and hot tubs don't mix.  Nor is it a play tub for the kiddies - the temperature can boil their little brains, which come to think of it, might not be a bad idea, as it would calm the little fuckers down.

No, what makes it a desirable thing is something you discover when you hit 40, and surely by 50 - everything hurts.  The human body has no warranty and the stupid stuff you do in your 20's will come back to haunt you in your later years.  Kids who "gave 110%" for the high school football team find out later in life that no one really gave a shit, and their knees are shot.  Be kind to yourself.  Yea, I know, when you are 20, you are invincible.  You can drink beer all night long, puke, and get up and go to work the next day.   But something has to give, eventually - and does.

Back injuries, neck injuries, knee injuries - all are common.  And you can go to a doctor and they can recommend some risky surgery (which in some cases may be justified, in others, well, check the parking lot to see if the doctor has a fancy car).  In other cases, such as we experienced, the doctors are all-too-happy to write a 'script for Oxycontin.  So if you put it in that perspective, a hot tub is a helluva lot cheaper than a opiate addiction.

The better doctors admitted (after expensive CAT scans and MRIs) that not much can be done about compressed discs in the neck and back.  They suggested massage therapy and applying heat.  The hot tub sort of does both.   So far from being a "luxury" it can be a necessity, or at least something that improves your life and reduces your pain levels.   The issue is, how to do this on a budget?

The past is prologue....

Our first hot tub was a typical 8' x 8' monster that ran off 220V.  We got a "deal" on it from a lady who sold them out of a storage locker.  We set it up on a gravel pad, and I ran the 220V to the breaker box (which as an Electrical Engineer, I can do, others have to pay hundreds for this).   It worked fine, but like any appliance, it had a lifespan of about 15 years, tops.  The heater broke and we replaced it.  The "Ozone generator" broke and I never replaced it - ozone is nothing to fool with and it seemed to make an acrid smell when the jets were running.    We moved the tub to our vacation home in New York.  The tub had a fiberglass liner and a wood composite outer shell.  The wood started to rot.  The doors to the service compartment rotted off and I replaced them.  The pump died, and I replaced that.  It started to leak, which is the deathknell of any hot tub.  We sold it with the house and within a year, the new owners had someone haul it away, which they did after cutting it up with a chainsaw (which is how old hot tubs are hauled away).  I am willing to bet they didn't winterize it.

The next tub we bought was a Softub, which we got on Craigslist for $300 which is a screaming bargain, as they cost $3000 or more, new.  We had it for over a decade, and the vinyl liner started to wrinkle and crack. Then the main seal on the pump started leaking, which caused the pump to seize.  It was about 20 years old - beyond its service life.  What to replace it with?

The Softub was one of the first plug-and-play hot tubs on the market.  The design was pretty ingenious.  A heat exchanger surrounds the motor and the heat the 110V motor heats the water.  Sounds like it wouldn't work, but it did.  You just plug it into a 15A outlet and add water and go.  Like any hot tub, it takes overnight to heat up.   Eliminating the need for an electrician and 220V wiring saves a lot of money and makes installation a breeze - and a do-it-yourself project even for the lamest of us.

(It should be noted that any hot tub needs to be outdoors and well-supported.  Putting a hot tub inside is a recipe for a mildew nightmare.   Putting one on a wooden deck without reinforcing it properly is a recipe for a deck collapse).

We liked the plug-and-play aspect of the Softub, but disliked the vinyl liner.  New liners were hard to come by and as I noted before, costly.  The cost of re-lining the old tub and replacing the motor was about 2/3rds the cost of a new tub.  Time to move on!

Since the Softub was invented, a new generation of plug-and-play tubs has hit the market.  These tubs use a one-piece shell which is roto-molded of plastic - sort of like a kayak.   So no vinyl to wrinkle and crack, and no wooden case to rot or get termites.  They run... about $3000 (see a pattern here?) but thanks to CoVid, most were showing a waiting period of 30 weeks or more before delivery.

So I was surprised when Amazon said they could ship in 4-6 weeks.  They lied.  What's worse, is once I found out the delivery date was more like 12 weeks, there was no way to cancel the order.  Crappy Amazon!   But the product did arrive - and the shipping company was decent about it (they are not responsible for Amazon's bullshit) and I called them and they even delivered it a few days early.

The product - made by Strong Industries in Pennsylvania on February 21, 2021 (second shift, it was scrawled on the bottom) - arrived on March 6th.  Amazon sells it as an "Essentials" brand, which is their house brand for anything.  I am not sure if you can buy direct from Strong or whether they sell through other outlets.  I would suggest you do if possible.

UPDATE:  I checked their site and they do sell through other dealers, but only for larger, fancier spas. This basic "Essentials" unit appears to be sold only through Amazon.  Bummer!

Apparently the CoVid hysteria is wearing off - the price of the Hot Tub went from $3600 to $3300 to $3000 in about 12 weeks.   I see a lot of RVs on dealer lots.   And there are a lot of "Help Wanted" signs all over - with no one applying for the jobs.  Just as with the recession of 2006, when unemployment was extended again and again, no one wants to go back to work when you can make more money sitting at home.  But this will change, fairly soon, just as it did the last time around.   I suspect a lot of people who bought RVs last year may be having second thoughts about such an impulse purchase, though.

The new tub arrived on-time, and unlike the Softub (which one person can carry) it needed an appliance dolly to move.  The shippers moved it into place on our front porch and we unwrapped it - no damage!   We drained the anti-freeze per the instructions and filled it with water and plugged it in.  The next day, it was hot!

The temperature seemed a little on the cool side, though, compared to the Softub, which we ran at 102 degrees.  When set at 104 degrees (the max temperature) it seemed about the same as the Softub at 102.

Unlike the Softub, this unit has a separate heater and pump - just like the big-boy hot tub we bought years ago.   It can be wired for 220V with some minor adjustments to the control panel (DIP switches) and supposedly that is more efficient and heats faster.  We'll see.   But it is plug-and-play by default, and we have it wired to a 15A circuit and it doesn't trip the breaker.

It has 12 jets and a multi-color LED light.  Not a lot of fancy (and useless) features like "waterfalls" and such - just a basic tub.   But I like the idea that it is all hard plastic, and unless the plastic cracks, it should give years of good service.  The pump and heater appear to be standard hot tub components, so if they need to be replaced down the road, it should be a simple matter.

I m happy with the product, but not happy with Amazon.  Fuck Jeff Bezos!  The vaunted "service" of Amazon is an illusion and they are deceptive as all get out, as I noted before.

But in terms of technology, it seems the "plug and play" hot tub is here to stay, and that's probably a good thing.   Just don't buy it from Amazon.