Spotting a Raw Stock Market From 100 Paces Away... 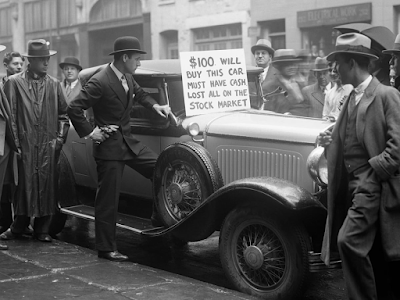 You can spot raw deals from the way they are presented.  What about markets?

A recent article online opines that the economy is in an odd place.  On the one hand, some argue that with the pandemic "over" (let's hope) that the economy will take off due to pent-up demand, much as it did after World War II - when returning GI's all wanted new cars and houses and had babies and so forth.

On the other hand, after World War I - and most wars - there is often a recession.  Hard to peg this one!

The article raises an interesting point - many investors are skittish because the market doesn't "feel right" - something is bugging people and the volume of stock trading has declined, while the amount of "retail" trading (by clueless idiots like you and me) has increased.

This is troubling. Yet you can't put your finger on what is "wrong" or whether anything is indeed wrong.

But the article got me to thinking, that the "gut reaction" of investors might be saying something.

I opined before that you can sit down with a pencil and paper and spend a couple of hours analyzing a car lease deal and then come to the mathematical conclusion that it is a raw deal.

Or.... you can just look at how the deal is presented, with lots of loud ads on the television and radio (and the fine print that even a 60" television can't show clearly, or is read at hyper-fast speed on the radio).  If it was such a great deal, it wouldn't have to be advertised at all, much less in deceptive ads.

Similarly, the place advertising that they "finance everyone!  Even bad credit or no credit!" isn't going to present any bargains, as they only finance people with bad or no credit.  Folks with an 800 credit score can shop elsewhere and get better deals.

Are there bargains to be had at the mattress store?  You know the one - or three or four in your home town - with those big glass windows, the huge signs in orange and red, proclaiming a perpetual closeout going-out-of-business sale?  The stores with no one in them, for some mysterious reason?

Are there good deals to be had there? Of course not.  The louder and more distracting the message, the more likely it is a con-job.  You don't need to go to the carnival to realize that carnies are a bunch of shafty con-artists and that you will never win at ring-toss.

So... what does that say about the current economy and current markets?  Consider the 100-paces drive-by view, without doing the math:

1.  Stimulus:  People are being paid more to stay home and not work than to get jobs.  Everyone is hiring, no one is applying.   The "funny money" flooding the economy is adding to the national debt, at a time when jobs are becoming plentiful.  How do we pay back this debt?  And yet, some are arguing that Andrew Yang should be Mayor of New York and everyone paid not to work.   Does this seem like a sustainable model for an economy? For a civilization?

2.  Nonsense investments:  People are talking in serious, hushed tones about the logic of investing in Bitcoin or Gamestop.  And yes, some folks made a lot of money on these things - the folks manipulating them. The vast majority of Bitcoin is owned by a small number of people, who profit handsomely every time a planted newspaper article extols its virtues.  The people who set out to take down short-sellers of Gamestop made a lot of money.  The clueless fools on Reddit who thought this was a long-term "investment" will lose it all.

3.  Retail Investors:  In that vein, you recall that before the 1929 Stock Market crash, ordinary people were investing in the stock market and hoping to strike it rich.  Everyone is making money, why not you?  And for a short period of time, everyone was making money, at least on paper.  But no one wanted to sell out and take their profits and go home because you might miss out!   The end result was pretty predictable.  Today we see the same pattern - people are buying and selling individual stocks based on tips from the Internet - tips from paid celebrity "influencers" or celebrity investors, who make the real money manipulating the market through social media.

4.  Self-serving IPOs, SPACs:  People are going ga-ga over these things because they are the darling of the financial media.  Some of the articles you see online are nothing short of irresponsible. A Bitcoin "exchange" goes public and an article appears lauding this and saying you should be buying Bitcoin - an investment in scarcity itself!   SPACs exist simply to do an end-run on regulations for IPOs - by taking a company public without all that messy "disclosure" nonsense. From 1,000 feet away, you can smell something bad here.

In the olden days, companies "went public" to raise capital to build factories and make money to pay dividends to shareholders.  Today, IPOs are done to create a market for the stock the insiders have - and want to sell.  Making money is not even secondary - it is not even desired.  Dividends?  No one pays those anymore!  Well, not the "tech stocks" that are not tech - just business plans that involve an app somehow.

Before 1929, a lot of big players, including Joseph Kennedy, got out of the market.  This served only to fuel conspiracy theories that the markets were "fixed".   During the real estate meltdown of 2008 (when today's "Robing Hood" "Investors" were mere teens) many people, including myself, saw the writing on the wall.   Major investors saw through Bernie Madoff from the get-go in the 1970's.  One man sounded the alarm on Madoff with the SEC for a decade - and no one listened.   It was really simple: when something doesn't make any sense, it probably doesn't.

When I saw crappy one-bedroom condos  in Pompano selling for $850,000 with a $3,000-a-month condo fee (and insurance and taxes - don't ask!) I knew something was very wrong, as no one realistically could afford such a place - or would want to - when you could buy a house on a canal with a swimming pool and a 10,000lb boat hoist for less money.

But the true-believers had answers for all that.  "Brazilians will buy them!  They love to come to South Florida and they have lots of money!"  Sure, a few do - and the fly here in their private jets and buy multi-million-dollar houses on the ICW, not crappy one-bedroom "designer ready" condos.  And there are not a Brazillion Brazilians that have that kind of cash.

But maybe the Brits!  They love to come to South Florida for a "break" and surely they will buy up all the inventory.  Same deal as the Brazilians - the few that can afford it want so much more, and the bulk of are not that rich.   But it made for a good story, and people who were literally "invested" in the market told themselves these stories to make it seem all so plausible. Because the alternative story line was just too horrible to consider.

Or take the "dot-com" meltdown.  I walked away when I heard all the happy-talk.  "Profits are a thing of the past!  You have to have a good burn rate! (the rate at which you squander capital)  It's a new paradigm! A sea change has taken place!"   And again, a few folks made a lot of money - the insiders who started these businesses.  But the bulk of the small investors who jumped on the bandwagon lost money - sometimes a little, sometimes everything.

Eventually, we will have to stop giving away money, stop extended unemployment benefits perpetually, stop the moratorium on evictions and foreclosures.   And this likely will happen by November 2022, if not beforehand - but surely after.  And when that happens, there will be much gnashing of teeth and rending of garments. We saw the same thing happen with Obama. Eventually the extended unemployment benefits were terminated and a funny thing happened - the "help wanted" signs all came down.

We can only hope - if the economy crashes - for a gentle Obama-style recovery.  Quite frankly, I thought the Obama years looked pretty good, compared to what we have today (or the last four years).  Republicans will tell you how rotten things were when Obama was President - or when Clinton was in office.  In both cases, though, the economy grew for eight solid years.  Maybe not the fantastic rates of return that Trump promised (but never delivered) but good solid growth that would have been a foundation for a strong economy, if we hadn't ballooned the deficit and national debt even further under Trump - and cut taxes to boot.