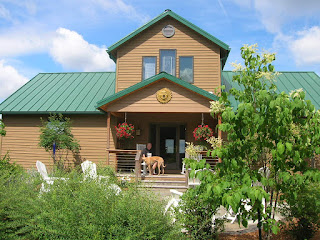 Owning two houses sounds like a real luxury- and it is.  A luxury most of us cannot afford.

Sir Elton John and the Dali Lama have one thing in common - they own fabulous homes on every continent except Antarctica.  Of course, they can easily afford this, having hundreds of millions of dollars (or at least millions) to play with.  They can afford to hire people to look after their places, keep them clean, do maintenance and whatnot.  Ordinary people can't.

And that is the conundrum for the "Snowbird" or vacation homeowner.   It is ironic that in an era where many working-class people complain that houses are unaffordable - and in short supply - there are a plethora of people who own two or more homes, and sometimes spend only a few weeks a year - if that - in some of these homes.

There are folks "living" on our island who come one weekend a month, or just for three months in the winter.  There are others who have abandoned homes that have not been occupied in years - sometimes decades.  It boggles the mind of the average person - who can afford to own a half-million-dollar home and let it sit vacant most of the time - and pay taxes, utilities, and insurance?   Some of the "part-time" residents here would be better off renting the Presidential Suite at the Westin hotel here - it would be cheaper and they have maid service.  I mean, if you are coming here one weekend a month, owning a house makes no sense whatsoever.

The problem with owning multiple homes, in addition to the staggering costs involved, is the maintenance.  And by that I don't mean just the repairs that you need to do, replacing appliances, air conditioners, furnaces, roofs, flooring, paint, and whatnot, but also the daily cleaning and polishing that keep a house in order - not to mention the mowing and gardening, if you want it to look presentable.

We gave up our vacation home several years ago - and it was a relief.  Sure it was fun to have a place on the lake with a boat hoist and a big barn and a pottery studio.  It was also a lot of work and expense.  We became home-bound, going North every summer to attack a list of chores.   In retrospect, a simple trailer by the water or a shed or cabin would have been a better bet - to spend a month or two and then lock it up and leave.  Even better, rent someplace.  Or even better - what we do today - travel by RV and move on to another lake every week or so.   Owning sounds like a great deal, until you realize the costs involved, in terms of money and your time.

And since we mere mortals - who have not been knighted by the Queen or funded by the CIA - cannot afford to hire people to do all this labor, we become slaves to houses.

Recently, some of our friends returned from their second homes and the common complaint was that when they got there, there were dead bugs everywhere, and they spent most of their time doing home repairs, cleaning, and maintenance, rather than enjoying the area and its attractions.

So what's the answer?  Well, I think to begin with, is to simplify and downsize, if you are wanting to go the two-house route.  If the vacation home is a simple cabin or beach shack (which is what our ancestors did, back in the day) there is far less in the way of maintenance and repair to do.   We looked at a small lake cottage early on, only to dismiss it out of hand as being "too small" - and ended up buying a four-bedroom house on five acres of land, that was far more house than we needed - and a lot to take care of, as well.   Far easier to walk away from a beach cottage after putting antifreeze in all the pipes and turning off the electricity.

I think the other alternative is what we are doing now - just vacationing, and not trying to "own your vacation".  As I noted before, if you want to screw up a vacation, pick up the local paper and read the real estate listings as well as the rants of the locals as they complain about the insane local politics.  It is a real downer.    When you are vacationing somewhere, it is just a place to have fun.  When you own property there, you get drawn into local politics and controversies, as you are now a taxpayer - often a hefty taxpayer at that!

The other option is to just not give a shit and let the places fall down around you.   You go back and forth between these run-down properties and eventually, you become so old and infirm you stop going back and forth and "land" in one or the other.  And that is how some of the houses here on our island ended up abandoned - the owners are in the nursing home, keeping the house out of "sentiment" even though they haven't seen it in years and never will see it again.  It ain't a freaking keepsake locket!

Stranger still, there are a lot of people who have money - or think they do.  I thought I did, at one time, too.   Tales abound about people trying to buy a house only to be outbid by out-of-state buyers with cash offers.  I mean, this is the stuff that creates social unrest.  Poor Joe Punch-clock is trying to buy his first home, taking out a mortgage he hopes to be able to pay with his meager paycheck, so he will have a place to live, perhaps a place to start a family.  Some asshole from out-of-State comes in and pushes him aside, with a wheelbarrow of cash.  And the punchline is, the asshole who outbid him isn't even going to live there, but leave the house vacant most of the time.

In other instances, the houses are rented out on AirBnB, which I used to be a fan of, until I realized it was just taking the existing hotel business and putting it in residential neighborhoods, and forcing out residents.  And yes, I rented out my condos on VRBO back in the day - displacing some folks who used to live there full-time before I bought it.  It is akin to Uber and the ilk - not creating new technology or a new business model, so much as destroying the taxi business and pushing it onto desperate people who are less paid and less regulated than cab companies.  Progress!

I can only say that if you decide to go the vacation home route, have an end game in mind.  Vacation homes are not forever, but something that you may own for a decade or so, while you are still ambulatory and have the energy to maintain them.  The idea of the family vacation cottage is a little overblown.  I have seen, in multiple instances, where the children have no interest in inheriting Mom and Dad's vacation cottage, other than to immediately sell it and pocket the cash.  The didn't like where Mom and Dad vacationed to begin with, and don't want to be caught up in some financial arrangement with siblings. And in many cases, where the child keeps the home, the results are often disastrous. "It isn't costing me anything!" they say, so they leave the home to rot, visiting it only occasionally, and each time being overwhelmed at the amount of work a house needs when it hasn't been visited in months.

But quite frankly, for the cost of a vacation home, you could spend months on a cruise ship, every year, and come out ahead, in terms of cost.  And you'd see something new every year, too.  There is some attraction to being a "local" in a vacation spot, I guess, but if you are merely a vacation home owner, well, the locals will never warm to you at all - particularly in places like Maine, where anyone who wasn't born there and can trace their ancestry back several generations, is deemed "from away" or a "flatlander" (inexplicably) and viewed with mistrust.   And quite frankly, who the hell wants to be a local in these loco tourist towns?

I don't regret buying the vacation home - and I don't regret selling it, either.  It's like owning a boat - it's only a mistake if you think it is some sort of lifetime commitment.  Buy it, use it, have fun, and move on when you get bored with it.  Ye can say ye did it - and then do something else.  Hanging on to vacation homes, boats, cars, campers, or airplanes, long after the thrill is gone or after you've stopped using them, makes no sense at all.  They go from being a thing of joy to an albatross around your neck.  There is no shame in selling out and moving on.  There is shame in letting a house, a boat, or a car, or whatever, just die of neglect or become the source of unhappiness.

Use things - don't let them use you!

UPDATE: the only thing worse than a two house conundrum is the three house conundrum.  We've met more than one couple in their late 80s or even early 90s who own the three houses that they move to and from during different times of the year. They complain that it's all too much and the places are falling down around them - and their kids want them to sell out and move to something simpler, but they don't want to give up. These are people who probably have less than 48 months to live and yet they cling to these things. I guess they give them some sort of comfort. Nobody wants to be seen as giving up.