Who Wants To Be Angry All The Time? 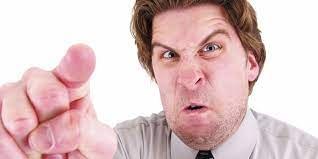 It is funny how people are.  I mentioned before how a neighbor lost their job because they insisted on driving their own car to clean rental properties.  Their car had a litany of anti-Trump bumper stickers, including a creepy "ReSisT 45!" in mis-matched mailbox letters.   The company offered them a free vehicle to use, but it was the principle of the thing, so no more job.

Well, since then, almost across the street is another angry person with a "Biden is not MY President!" sign, which is interesting, as I guess they must be Canadian or something.   People are angry about the election, and as I noted in a recent posting, will bend your ear about conspiracy theories and how everything is all rotten and evil.

Why would you want to live like that?  And it is a choice, too.  You can go down the rabbit-hole of conspiracy theories and Qanonsense, but that is a choice - a poor choice.   None of those theories or arguments are true, by the way.  No chips in the vaccine.  No, a software guy isn't in charge of bio-engineering viruses (other than maybe computer viruses!).  And no, Hillary isn't chopping up babies in the non-existent basement of a pizza shop.   There are a lot of things to be angry about in the world, why be angry about made-up bullshit?

Of course there are powers-that-be that want you to be angry all the time.  Republicans, Democrats, foreign governments, commericial interests, religions - even your family and friends.  In the politcal field, it is called "engagement" which is a term also used online.   People who are laid back and generally happy are not going to send off money to Senator Klaghorn's political committee.  And they are less likely to vote.

I wish I could say this was a Republican thing or a Democratic thing, but it is both.  I sent off a few dollars to Reverend Warnock and in return, he SPAMS me every day with alarmist messages that Democracy, as we know it, is about to collapse any minute now, unless of course, I send him more money.  I am not sure how sending money is going to make a difference at the moment, as no one is running for election in Georgia.   Rather, it is the same old money-raising tactic - instill a sense of fear in the voter, and then add a sense of urgency.   We need money or your way of life will be wiped out, and we need it now!

The NRA famously used this tactic - send us money or your guns will go bye-bye!   But for some reason, the government never gets around to "taking our guns away" and of course, the NRA would then say, "See, it worked!  We saved your guns from confiscation by the gun gestapo!"   In a way, this sort of thing is a perfect feeback loop.  It is like the "rainmakers" I wrote about before.  Give us money and we'll make it rain!  If it rains, they take the credit.  If not, well, you didn't give enough money!   Or they quietly slip out of town.  Or both.

OK, so it isn't hard to figure out why other people want us to be angry all the time.  But why do people go along with this - claiming to be "woke" or saying things like, "Of you're not outraged, you're not paying attention!"   It is a form of perverse status - the concept that you are "in the know" as to all the horrible rotten things going on in the world, things that only you and a few hundred million people know about.  And it is your job to educated the masses as to how horrible things are.

It is like the nice man I met - we had a nice chat, and then he went down the rabbit-hole.  He told me I was clueless to all the horrible goings-on in the world, and if only I would open my eyes and not be one of the "Sheeple" I would understand!  This from a guy living with his Mom, who blew his life's savings on cryptocurrency.  We had one thing in common though - neither of us worked.  Me, because I'm retired and a millionaire.  Him, because no one hires crazy.

Um, if this is ignorance, then ignorance is bliss.

Actually, if you want to be "in the know" and "woke up" or whatever, try law school.  Not that it will lead to a good job anymore, but in classes like Criminal Law, Constitutional Law, and particularly Tax Law, they show you how the system actually works - and how you can wildly profit from it.  Well, I did, anyway.  Not a lot of room for weak thinking in Engineering or the Law, although I have known more than one Patent Attorney who despite the best efforts of their professors, believed in nonsense like conspiracy theories or tax denial.  Logical thinking is no guarantee against mental illness.

Oh, right, that.  Mental illness - mild or wild - is behind a lot of this anger.   People want to take out their disappointments in life against society at large, or posit that the reason why things didn't work out as they thought they would was because of nefarious schemes by hidden forces.  It is a comforting thought, in a perverse way.  Nothing is ever your fault - "if only" Trump were dictator-for-life or the Democrats would wipe out my student loans, the world would be fucking perfect!

Sad, ain't it?  Because we've tried this approach time and time again in this world.  "If only" the workers were put in charge of the means of production!  The world would be a perfect place!  Millions of deaths later, people finally realize that "if only" ideas are never good ones.   The Germans tried it, too.  "If only," they said, "we got rid of the Jews - just that one thing - our country would be perfect!"  But again, it didn't work and the results were horrifying.

Mental illness might not be avoidable by the individual - or can it be?   I believe that mental hygiene is like personal hygiene - you have to work at it.  You start going down these rabbit holes of conspiracy theories and angry thinking, and you can literally drive yourself insane.  And yes, I think drugs are involved, either a lot of pot or maybe this meth that is going around - speedy people upset and going off the handle.  Perhaps.

Life is not an optimized event, and it is an irrational idea to expect everything to be optimal and perfect, particularly when humans are involved. Compromise and coalition are often a better approach to my-way-or-the-highway.   Biden wants his infrastructure deal signed, but some Democrats are balking at a 28% corporate tax rate and propose 25% instead.  Take the compromise, Joe.  Better to get something done than nothing - as Obama learned the hard way.   Politics is the art of the possible - holding out for the impossible ends up in gridlock.

If you think about it, the world really isn't such a rotten place.  Oh sure, there are rotten parts at any given moment.  But if you are reading this, odds are you aren't in one of those places.  If you live in the USA, you are in the best place in the world, relatively speaking - or at least one of them.  Well, a lot of people in those rotten places seem to think so - they keep banging on the door wanting to get in.

You can make yourself miserable by thinking everything is awful - awfulizing - and being angry all the time.  It will likely shorten your life in one way or another.   Anger causes all sorts of problems for your heart and nervous system.  Crazy people often don't live very long, as a result.

People say that Mark and I seem very happy all the time and wonder why this is.  We don't have cable television.  We don't spend countless hours watching left-wing or right-wing "news" shows or feel we have to keep "up to the minute!" on "current events!" - and I think that is the key.   They want to keep you wound up and watching - or clicking.  So if you spend hours every day on conspiracy websites or watching hyper-partisan news (or any news for that matter) you will turn into this angry person who is not very fun to be with.

Angry people tend to be helpless people - they have all this pent-up anger and feel cheated out of life, mostly because they stop doing things, other than watching angry television shows and reading angry websites (and "researching" Qanonsense - looking at shit on the Internet is not "research"!).

Get off the couch.  Turn off the TeeVee.  Disconnect the cable.  Stop staring at your cell phone.  Walk away from discussion groups, social media, and other time-wasters that raise your blood pressure and make you anxious and angry.

Live.  You don't have much time left - life is very, very short.  And it evaporates like ether.

It's a hellluva lot more fun being happy than being angry all the time.  And yes, you do have a choice in this matter.