Fitbit - First to Market is Last in the Marketplace 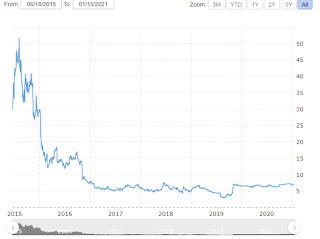 If you bought Fitbit stock at $50 a share, thinking it was "the next big thing!" you are crying in your milk, today.

Fitbit has finally been sold to Google - although technically, I guess a Justice Department anti-trust investigation is still pending.  The sale price was about $7.50 a share - a long fall from the IPO and post-IPO prices that were $30 to $50 and above.

In retrospect, it isn't hard to see why Fitbit failed - or failed to become the next Apple or Microsoft in its market niche.   The hardware was expensive, poorly made, clunky to use, and not very durable.  I wrote about Fitbit before - Mark wanted these to track exercise and weight.  So we got two Fitbits and the Aria II scale.  None of it worked very well.  The early Fitbit models were primitive and didn't provide much in the way of data - and they were wildly inaccurate.  The Aria II scale would log your weight as "guest" and if you went on the Fitbit site to change the data (and assign it to one or the other) it would stubbornly remain as "guest."

But the worst part was how Fitbit responded to these critiques.  If you go to the Fitbit discussion group, if anyone asks a question, and the answer is, "no one knows" or "they all do that" then the question is marked as "Answered".   If you dare to question how great Fitbit is, as I did after posting a question about the Aria II scale, your entry is deleted and you are blocked from the site for 24 hours or more.

In other words, if you say the King has no clothes, you are censored and censured.   Off with their heads!

This lead me to believe that Fitbit has a number of systemic problems, not the least of which is the fact that everyone else has moved into this "space".   The devices themselves were not very durable.  I am hard on watches and jewelry - wearing a Fitbit while working on a car ensured it will be bashed but good.  Mine started to look pretty shoddy fairly quickly - the plastic lens cracked and then I stopped wearing it.  Mark's stopped taking a charge, and he stopped wearing it.  I took the plastic lens off his and put it on mine and reprogrammed it to his account.  He wore it for a month or two and then, well, it ended up on a drawer somewhere, just as I predicted it would.

My new (used) Galaxy 7 "Active" has a fitness tracker built-in, which I was not aware of when I bought it - sort of a bonus.  And it works pretty well, but you have to have your phone in your pocket when you go for a walk.   We walk about 2-4 miles a day (a loop around the neighborhood is an even 2.0 miles, door-to-door) - it is funny how the Galaxy talks to you as you walk, offering encouragement and telling you when "workout paused" or "workout resumed" and whatnot - if you stop to talk to neighbors.

So of course, Mark wanted in on this and researched a new fitness tracker and decided he "had to have" a Huawai Pro 3, as it has a color display and GPS - a long way from the early Fitbits we had.   I found one on eBay "open box" for cheap and it arrived in two days.  The people on Amazon promised delivery by the end of June - this "shortage" nonsense is getting out of hand.  Well, that and the Amazon people wanted $40 more for the darn thing.  So he got it and is happy  and playing with it and figuring out what it can and cannot do.  And I am sure that in two years, it will be "in a drawer, somewhere" and there is little I can do about that.  My Samsung Galaxy S7 Active will be right next to it - such is the nature of modern "tech."

But now - Google!  Maybe Fitbit will rise from the ashes and become "The Next Next Big Thing!" or something.  Don't count on it.  While Fitbit has been snoozing, the competition has taken off.  First to market is often last in the marketplace.  The Apple Watch is the favorite of those in the Apple ecosystem - it is a status symbol, and Apple users are all about status.  For the rest of us, well, there are a plethora of choices, from a variety of manufacturers, all at prices undercutting Fitbit and providing the same or better features.  In this latest purchase, Fitbit didn't even make the top 5.

But beyond that is Google's storied habit of acquiring companies and then immediately driving them into the ground.  It isn't just a Google thing - other tech companies do this as well, or fumble the ball with new technologies.  Microsoft, for example, tried to "me too!" the iPod with something called a "Zune" and it flopped, along with the Windows Phone.  Google tried to develop its own phone, only to realize they were competing their own customers.   I am sure that Google will screw up Fitbit as well.

Compounding this are the agreements that Google has made with the EU anti-trust agency to limit cross-pollination of data from Fitbit to the Googleverse.  I am not sure why, but for some reason, people are paranoid that the data they provide to a fitness tracker will be used by third parties. These are often the same people who bare their breast to the world by posting their most intimate information on Facebook or Twitter (often with disastrous results to their lives and careers).  Yes, it was said that the Taliban was using fitness tracker data to stage ambushes of US Servicemen overseas.  I am not sure if that actually happened or was just something that could have, if the Taliban had their shit together.

But data is the name of the game today, and Google might have given away the store by agreeing not to use user's data to sell things.  If you aren't doing that, how do you make money at this?  Selling Fitbits?  Hard to do when the competition in China is undercutting your prices.

Speaking of which, should I be concerned that Dung Chow Ping is reading Mark's fitness tracker data and plotting an evil takeover of the world from it?  Again, I think self-appointed "privacy advocates" might be stretching this a bit much.  If you are so concerned about privacy, then don't use a fitness tracker.  After all, studies show they don't really help much in making you more fit.

But the main thing is how this whole deal was sold to us - much like Zipcar, which made a big splash, saw the stock price climb, the founders sold their shares and made Billions and then after it all came crashing to the ground, was sold to some corporation for pennies-on-the-dollar.  A lot of small "retail" investors got stung by that, and by Fitbit, because they listened to people on the Internet, hyping these stocks and hyping the IPOs.   A lot of little people lost a little, a few big people made out big.  That is the nature of the IPO in modern America. 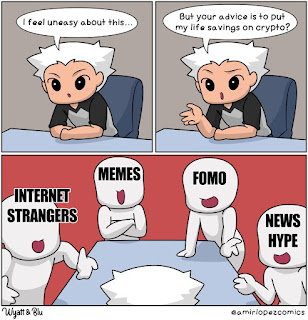 After Zipcar and Fitbit, what's next?  It ain't hard to figure out.