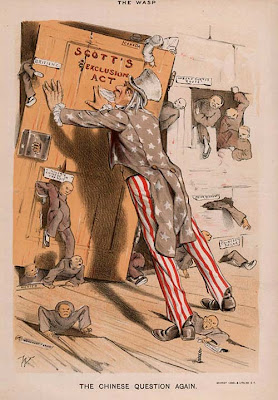 Years ago, poor Chinese came to America for a better life.  Today, rich Chinese are Emigrating - to Canada and America.  Why is this?
China is supposed to be the new superpower.  With the largest population in the world, a huge export business and staggering economic growth, people speculate that this Century could be the "Chinese Century" as China becomes the world superpower and the US declines in influence.

While there are some economic indicators to show this may be true, I think, like the fears of the Japanese "taking over America" in the 1980's, it may be later seen as overblown.   Just in case you missed it, the Japanese economy tanked in the 1990's and they have had a decade of stagnation until fairly recently, only to be knocked back down again by the one-two punch of a global recession, tsunami, and multiple nuclear meltdowns.  The golf courses we sold them back in 1985 have all been foreclosed upon.

Today, the Chinese own all our debt.  The Chinese make everything we own.  The Chinese take all our jobs.   The Chinese buy all our Buicks - they are crazy, aren't they?  (GM is doing well in China, only because the word "Buick" translates roughly as "large penis car" in Chinese).  Everything is made in China these days.   We even import our children from there.

But wealthy Chinese are doing one other thing - leaving in droves.  If they have the money, chances are they emigrate overseas, preferably to the US or Canada.  While US immigration laws may seem harsh, we do have two loopholes that allow just about anyone in.  One is to join the military (in shades of the old Roman and British traditions of hiring mercenaries).

The second is to buy your way in.   Got money?  You're in.  Give us your poor, your tired, huddled Millionaires, yearning to breath free!

But why would you tear up your cultural roots and transplant to a foreign country?  They aren't doing it for Baseball, Hot Dogs, Apple Pie and Chevrolet.  They aren't coming here because "You first class, Joe!  America #1!"

No, I think there are more pragmatic reasons.  While China has loosened its economic system and allowed people to accumulate wealth and start businesses, it remains a Communist Country.  The limited freedoms and liberties could be taken away at any moment.  And if the government perceives wealthy Chinese as a threat, they might crack down on them, as the former Soviet Union has already done.

Already, we are seeing that factory owners, if accused of making faulty or dangerous products, may be subject to execution.  I am not defending Melamine in Baby Formula, but such actions certainly give some Chinese Millionaires pause.

The limited freedoms being according people in China are a breath of fresh air.   But nowhere are these freedoms guaranteed.  And long-term, if you are wealthy, I think you would get nervous about staying in a country where the laws can be arbitrarily applied.  And if you wait until things "get worse" as people in Venezuela did, eventually it becomes too late to leave - or if you can leave, you have to leave your wealth behind (which basically means you can't leave!).

So logically, it makes sense to hedge your bets, become a U.S. Citizen, and have that all-important U.S. Passport in your hand, even if you return to the home country for extended periods of time.  If the shit hits the fan, you can be on the helicopter leaving the rooftop of the U.S. Embassy.

Probably also, it can't hurt to have a residency in the country which hosts your largest market for your goods.  You can sell a lot more in the US if you are in the US.

And of course our standard of living is higher - we have better transportation links, housing stock, access to consumer goods, utilities, infrastructure, you-name-it.  Living in America is far better than living overseas - regardless of whether you are wealthy or not.

Oh, but I forget.  Fox News, that patriotic news show, tells us America is a horrible place, a near-Socialist nanny state in economic decline.  Funny how self-proclaimed patriots are first to run down our country....
Newer Post Older Post Home