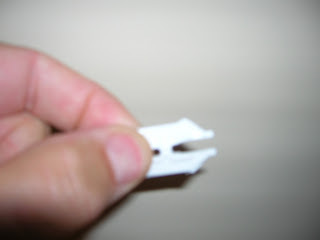 This cheap plastic clip is all that holds a Korky toilet fill valve together.  I would avoid these products at all costs, until they re-design this.  This is a poor design.

I recently replaced both the fill valves on the toilets in our house.  I am pleased to report that we only own two toilets now, down from 10 a year ago.  If you live in a Western Country, you should familiarize yourself with toilet repair.  Toilets are easy to maintain and are amazingly simple hydraulic devices.  What's more, parts are amazingly cheap, too.  There is no reason to pay someone hundreds of dollars to fix a toilet, when a whole new one can be had for under $100 or the guts for about $20.

The fill valve is the mechanism that fills the tank and this usually has a float which turns off the water once the tank is full.  Pretty simple stuff.  For years, I used Fluidmaster products, which are cheap and easy to find - the familiar green and red cardboard box at Lowes or Home Depot.  On a recent trip to Home Depot, the sales clerk said "Everyone raves about these Korky products, you should try them!"  - so I did, much to my regret.

The installation went OK until it was time to adjust the height of the tank fill.  Both Fluidmaster and Korky do this by allowing the two halves of the device to telescope to adjustable heights.  To lock the device into position, Korky uses a "twist grip" slot mechanism, secured by the small plastic clip shown above.  It is not easy to install, and it tends to fall out.  Worse yet, the small tangs at the side appear to be all that holds the thing together, and these tend to bend and get broken easily.

I installed it and almost immediately when I turned the water on, the clip fell out and the head of the valve shot up with enough force to eject the toilet tank lid from the toilet.  Fortunately, I was able to catch this before it fell and shattered into a million pieces and cut my foot.  I jerked around with the clip, which was in the tank.   Fortunately, I did not FLUSH the tank, or it would have gone down the drain.

The Korky design adjusts by rotating the head to "unlock" it and then adjusting to the correct height.  You then turn it back to the "locked" position, but there is little to keep the head from rotating again and sliding up under pressure.  Korky provides a "tamper proof key" (top photo) which is supposed to prevent the head from rotating.  It don't work.  The slightest movement and the key falls off, and the head will rotate and pop up, with potentially disastrous results.

I finally got the clip jammed in there, but by now, the tips were pretty worn.  It seems these are all that holds it together.  It was fine for a month and then...

BANG! suddenly one night the clip falls out again and the valve shoots to the top, this time not ejecting the lid (thank god) but allowing the toilet tank to over-fill.  Thankfully, we were home and the time and could shut the damn thing off. 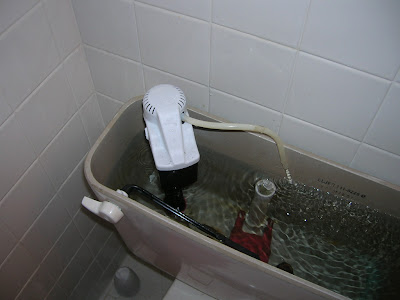 Once the clip fails, the head of the fill valve jumps up like a piston, pushing the toilet tank cover off and allowing the tank to overfill.  If the hose comes undone and flops over the side, it may flood your house with water as well.  All because of a crummy clip design!


So off to Lowes for a replacement - no more Korky!

Oddly enough, as Lowes, they have two displays, one for Korky and one for good old Fluidmaster.  The Fluidmaster display was ravaged - almost every unit sold.   The Korky display was well-stocked - none sold.  It would appear I am not the only one to have reservations about Korky products!

Fluidmaster uses a locking RING to hold the two pieces of their unit together: 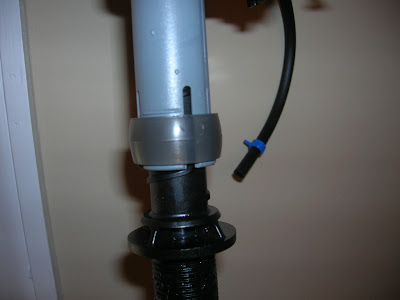 This Fluidmaster locking ring cinches down the upper sleeve onto the lower shaft - all the way around, and has a positive lock feel to it.  You know if it is locked!  Far better design, and the cost is about the same.   This is a properly Engineered solution, in my opinion.

A schematic of the Fluidmaster design.

A diagram of the Korky "Tamper Proof Key" - a tacit admission, I think, that their "twist and lock" design won't stay in place.   Problem is, the key doesn't fix the problem, it just falls out.  The head untwists and all hell breaks loose.

On some online videos and instructions and blogs, people claim the Korky design is "easier to install" - but I fail to find that to be true.  The twist-and-lock design would seem to be easier to adjust, but in the swirling vorticies of the toilet tank, it doesn't seem the head stays in position, and thus "unlocks".  The tamper-proof key doesn't seem to help matters.  And trying to install the key in the confines of a toilet tank is anything but easy.

The problem is, the "twist and lock" feature seems to rely on water pressure to keep the head in the twisted position.  Once pressure is removed, the head can twist out of position.  And in the confines of the toilet tank, it is hard to tell if the head is locked or not.  It was a great theory, but in practice, well, it works less than optimal.

I have never had these problems with Fluidmaster products, and as I noted, until recently, I had 10 toilets.  We redid the five toilets in the NY property with Fluidmaster valves and never had these problems.  We also used them in Virginia (two toilets there) in my office (two toilets) and in our rental properties.  The red and green box is all ye need know.  These "new kids on the block" designs still need some work, in my opinion.  Tamper-proof key, indeed!  Crap!

Note:  Why do they call it a "tamper-proof key" anyway?  Who is tampering with your toilet?  Answer:  No one.  It just sounds better than "badly designed patch for a crummy locking mechanism".  Sounds to me like they hired Microsoft Engineers to design and market their products - take a product defect and sell it as a feature!

Fortunately, toilet supply parts are cheap.  The Fluidmaster valve kit was like maybe $10.  I was suckered into buying the Korky at Home Depot because it was a dollar cheaper.  Live and learn.  Like I said, when I went to Lowes, no one seemed to be buying Korkys, but the Fluidmasters were sold out.

By the way, one problem you may have with these sort of things is debris clogging the valve.  When this occurs, sand, grit, or the like may rest under the valve seal edge, causing the toilet to run.  One advantage of the Korky design is that the valve can be readily disassembled and cleaned (and the instructions show how to do this).  The Fluidmaster design can also be disassembled and cleaned, but is a little less intuitive.  Korky has some design advantages, but they are swamped (literally) by the poor height adjust mechanism.

Korky might have a good product on its hands, but it needs to work on a better height adjustment mechanism.  A cheap plastic clip just is not acceptable.  A locking ring, like on Fluidmaster, works much better, in my opinion.  That sucker GRIPS!  But given how badly the height adjustment mechanism was designed (and the half-hearted "tamper proof key" patch was added) I have to wonder about the quality of the rest of the mechanism.