Death of the Car-Based Economy 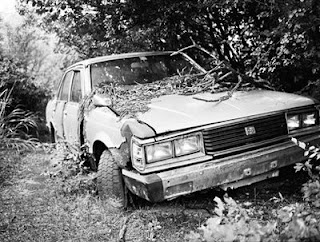 Is the car culture and car economy headed for the trash heap of history?  Stranger things have happened!


The CEO of Ford, Bill Ford, recently gave a talk where he predicted dire things happening in the next 20-50 years - that the traffic volume would grow by a factor of four and we are all headed for trouble.

To paraphrase his great-great Grandfather, "Bunk".

And if this guy is running Ford, Ford may run into the ground.  Time to sell Ford stock - with visionaries like this at the helm!

One thing Mr. Ford failed to take into account was the Internet - which has allowed a lot of people, like myself, to work from home.  Far from being a marginal movement, it is now a mainstream one - the entire Patent Office telecommutes, and in the DC area, about half the working population works at least one day a week from home.  Even McDonald's has order-takers "telecommute" from their homes in Texas (where labor is cheaper) to stores in Hawaii.  All it takes is imagination.

I want an iPod?  I can go to the Apple store, waste 2-3 hours of my life, driving there, shopping, parking, negotiating a price, etc. or I can go online and buy one used on eBay for half-price - or just buy one from the Apple store online.

Cost savings?  $10 in gas - easily - plus wear and tear on the car.  Plus three more hours of life to live, and not squander "shopping".  Plus the savings in getting a better price - which far outweighs the shipping cost.

And think about it - the item arrives by mail or UPS a few days later.   The mailman has to make the drive, to be sure, but he is delivering to 100 homes in one trip.

Compare 100 deliveries in one trip to 100 people driving to the store, and you can see that the Postman and the UPS guy are real energy-savers and environmentally friendly - as well as a great way to reduce gridlock.  Each package delivery the mailman makes is one less trip to the mall a homeowner makes.

Yea, I know, you want to "touch and feel the merchandise".  I'll tell you what, you and the guy who still likes to mail his checks every month can get in your oil-burning Oldsmobile and go to the mall and shop.   Me?  I'm going down to the beach - which is a short drive, because I live at the beach, which I can do because I telecommute.

How's that townhouse in Reston workin' out for ya?  And the four-hour drive to Rehoboth?

As driving becomes more expensive, and more importantly, more annoying and time-consuming, people will do less of it.  Why do something that is unenjoyable and unproductive, if you don't have to?

And more importantly, where are you-all going?  As I noted before in this blog, poor people love to drive all over hell's half-acre, mostly because they think it is something important to do and it makes them feel like they are accomplishing something.  But in 9 times out of 10, most of their trips are unnecessary - and due to poor planning.  Racing down to the 7-11 to get cigarettes, beer, and $5 of gas is a silly economic proposition - but a lot of folks do it.

So how will the Internet change our economy?

1.  More jobs will be done from home - anything that involves interfacing with a computer and/or a phone, including legal, customer service, billing, accounting, and other "office" jobs.  Like with the McDonald's example, it will be surprising, at first, what sort of jobs can be done from home. Things you think need a personal presence - like seeing a doctor - might be done by tele-presence.  Don't think your 17" monitor is the end-all of the Internet - it will go far beyond that.

2.  People will drive less, reducing the overall miles driven annually - or at least slowing or leveling off the rate of increase.

3.  People will move to more remote areas where quality of life issues are better and the cost of living is cheaper.  If you can live on a lake or by the sea (I've done both!), why not do that, instead of living in a miserable subdivision?

4.  Home delivery services will increase - which will prop up our failing postal system.  Packages will replace letters as the bulk of deliveries and as the main profit center for the USPS.

5.  More brick and mortar stores will close as people buy more commodity items online.  Online shopping is not a fad at this point, and so much of what we buy are fungible commodities that do not require browsing or "touch and feel" to buy.  This may be offset by opening of more specialty or convenience type stores - in more rural areas.

6.  Traffic in rural areas may increase - as people move out from urban areas, they may drive longer distances to shop in rural areas, but do so less often, stocking up (as we do) at discount mega-stores.

7.  Demand for more urban, upscale products will increase in rural areas.  Clem at the general store may find his clientele changing - and demanding more than warm beer and white bread.  There is an opportunity here for the new sophisticated rural dweller.  Call it the "Green Acres" effect.  Similarly, Old Jim at the Country garage can expect to see more BMWs and Mercedes drive in.  Again, an opportunity, if he chooses to go after it.

Perhaps one day there will be a beltway museum in Washington DC - where people can come visit (virtually, of course) a sample of the great concrete ribbon that once ringed the city.  Like segments of the Berlin wall, portions will be preserved to remind us of mankind's folly.

But I doubt we will see massive traffic jams as Mr. Ford suggests.  Only a fool would sign up for such a nightmare - and it is not like we have no choice in the matter.   We all have choices, even when we think we don't.  If you are stuck in traffic, it is because you made a choice to live somewhere far away from where you work - and chose to live in a city with bad traffic - and chose to commute to work as a single driver in a car - and chose, well, you chose it all.

So the traffic nightmare Mr. Ford posits will exist only if we chose it.  And collectively as well as individually, we can choose otherwise, if we want to.

And I think we should, frankly.