Talking to Your Spouse About Money 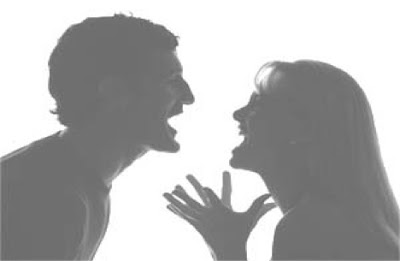 Most Marital Arguments are about Money.  How can you talk to your spouse about such an explosive issue without starting a fight?  It ain't easy!
Success in a long-term relationship relies on teamwork and the ability to work together toward common goals.   Many marriages in America devolve to little more than a race to the bottom - how much can I get out of this relationship before it all implodes?  And mostly this is because couples don't talk about money - can't talk about money - without arguing.

At some point in your life, you have to get serious about money - and I mean deadly serious.  Your lifetime income is a finite amount, and eventually, you will have to retire and live on your savings and the paltry promises of Social Security - which may not be kept.  If you are spending it all, in your 30's, 40's and 50's on cars and clothes and nights out with the girls or boys, bad things will pile up in your 60's.

Eventually, one of you has to get serious about money - preferably both of you.  And this can lead to some marital arguments.  But some fights are worth winning, and if you want to preserve your marriage, getting your financial house in order is essential, even if it means doing battle with your spouse.

Why is this?  Well to begin with, most marriages are between people of different ages - usually a spread of 5 years or so.  In addition often one partner makes more money than the other, which is not unusual.  And also it is not atypical for one partner to be spending more than the other - on household expenses, groceries, and the like.  So in any relationship, there may be a big breadwinner and a big spender, and that is not unusual.

And sometimes, your spouse may look around and see that the neighbors all have shiny cars and bit televisions and wonder why you can't have those things, too.  Or your spouse may be ridiculed by shallow-minded people at work for not having the latest shoes or smart phone.  And you may find yourself in a situation, like Mr. Shuster in the television show Glee, where his spouse wants more and more - and more than his paltry salary can pay for.  If a marriage becomes all about having a sun nook and a grand foyer - as well as a craft room - then it is not really a marriage.

One problem in discussing finances, is that any discussion can turn into an argument.  Trying to discuss money matters in a neutral way can result in a fight.  Why is this?  Well, your spouse is likely to take any discussion about spending as a personal attack on themselves.  You cannot question anything, it seems, without it being a value-judgement on them as a person.

But you have to work through this.  "It is not all about you" as they say.  Money is value-neutral, it is only people's attitudes about money that make it good or evil - usually the latter, and usually only because people fail to respect money.

Tracking spending is usually a good first approach to setting up your financial empire.  Until you really know where the money is going, you are lost in the woods.  I track all my spending - down to the penny - on Quickbooks.  You can find financial programs like Quicken for cheap on eBay or even free, bundled with your computer.  Yes, they take time to learn (I took an adult education class at the local community college on Quickbooks).  But it is totally worth it.

While sharing resources and co-mingling funds is the hallmark of any relationship, I quickly realized that having two people balance Quickbooks would be a nightmare - it just didn't work out.  So I set up a separate account for household expenses and food - groceries, restaurants, and liquor.  Mark balances this separately and keeps track of expenses.  He is learning how to keep a budget and how much we spend on these items.  And it is one less thing for me to have to deal with.

But all of that did not come without a lot of light and heat - and a number of mis-steps and false starts.  But if both of you are committed toward a common goal - and having a goal in mind is the key - it can be done.  Our common goal is to work as little as possible and goof off as much as possible.  Tracking spending allows us to do this.  When you squander cash, you have to work harder, which in turn leaves you less time to track spending.

One problem in many marriages is that both spouses want to spend, spend, spend.  Dad spends his time in his hobby garage, restoring his old Chevelle, or buying a new deer stand and hunting bow.  Mom, in the meantime, buys more shoes than Imelda Marcos - and never wears the same pair twice.  Both like to spend, and when called out on it, point to the other spouse's spending as justification for their own.  "You bought another pair of shoes?" Dad says, while Mom retorts, "Well, you bought a stupid carburetor for that stupid car!" and Dad gets defensive and says, "Well, at least I can drive the stupid car!  You never wear any of those shoes!"  - and so on, until a divorce attorney is summoned.

A better approach is to budget for what it is you want to do, and then stick to that budget.  A hobby car is fun, but rarely do they return more than 50% of what is invested in them.  And eventually, you will sell the hobby car - have the end game figured out in advance, and "leave, wanting more" rather than holding on until the paint is faded and the tires are flat.

And shoes are fine and all, but women's shoes are horribly made and yes, many women buy them for reasons other than to have something between their feet and the floor.  Realize this and get your shoe or clothing habit under control.  It isn't worth losing a marriage over - or retiring broke.

Communication is the key - and communication in a value-neutral manner.  There is no "blame" in a marriage, unless it really isn't a marriage but rather a convenient economic relationship for one partner.

Talk to your spouse about money - and keep talking, even if they don't want to.  Because in the end, it can save your marriage, or even your life.
Newer Post Older Post Home