My Life as an Underground Cartoon.... 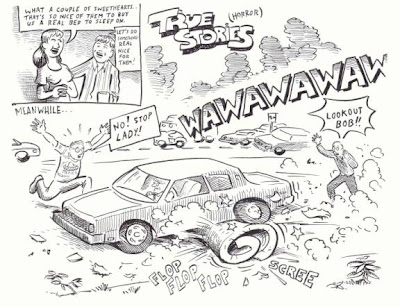 My former Draftsman turned me into a character in an underground cartoon...
Click on image to enlarge.


Move over Fritz the Cat and the Fabulous Furry Freak Brothers, I've been turned into an underground cartoon.   My former Draftsman, Richard McMurry, who retired from the Patent Drawing business, found my life an endless source of amusement.  And he created a couple of cartoons featuring me as a character.  I am not sure to be flattered or what.

The cartoon above has a story behind it - and a moral!  If you ever carry anything in the back of your truck, particularly a mattress, make sure it is cinched down tightly.  Here is the story:

If you ever carry anything in the back of your Pickup truck, STRAP IT DOWN.  Stuff flies out very easily, and can injure or kill someone.  Mattresses, especially, seem to have wings.

A few years back, we were getting rid of our old bed.  Our friend Jill and her boyfriend were complaining about how bad their old mattress was.  So Mark suggested that they take our old bed.

We put the mattress and box spring in the back of our old Toyota pickup truck.  It was pretty heavy, and I lashed it in with one strap across the middle.  I figured that should keep it snug.

We took off down the George Washington Parkway toward Old Town during rush hour.  There was little traffic going our way, but plenty going the other!  It was late in the year, so it got dark early.

Of course, we were chatting and not paying attention, when suddenly Mark says "hey, where's the mattress?".  I look in the rear view mirror, and to my horror, there is nothing in the back of the pickup truck.

Well, turning around on the GW parkway during rush hour is no picnic.  We had to drive halfway to Old Town to turn around.  It was solid traffic and people were honking at us for being in the
left lane and going slowly.  But we had to slow down to see where the mattress went!

"Maybe it fell off before we got on the Parkway", Mark said, "or maybe it is sitting on the side of the road."

Just then we came upon it.  There was the mattress, looking a little lumpy on the opposite side of the road, in the right lane, with a tire track across it.  The  box spring lay in the left lane
and, by some miracle, was intact!  Mark said, "Hey, it doesn't look so bad".  But not for long.  A full-size Chevy Blazer with monster tires hit it just then.

BAM!  The box spring just exploded.  Small pieces of wood and springs and cloth went everywhere.  "Well, maybe we can save the mattress", Mark said.

"Not likely", I replied, "Did you see the tire track across it?"

We took the next right and turned around at the Alexandria Avenue bridge.  "What should we do?" Mark asked, "We can't just leave it there, someone might get hurt".  "On the other hand", I replied, "do we want to own up to this?"

We went back to the scene of the devastation and pulled over with our flashers on and started tossing pieces of box spring into the back of the truck and off to the side of the road.  Almost immediately, two other helpful samaritans stopped as well.

"What happened here?" the first one asked.  "Someone lost a mattress off their truck and we stopped to get it off the road", I replied.  "Well, let me give you a hand" he said, and together the four of us started cleaning box spring bits off the road.

We didn't have time to move the mattress when an elderly lady in a large Cadillac zoomed around our parked cars and ran square into the mattress.  The low-slung undercarriage of the Caddy caught the
mattress which started to roll up like a dinner roll under her car.

She sensed the resistance and gunned the engine, causing the mattress to roll up even more.  At this point, here front wheels were off the ground, and her rear tires were leaving smokey burnout patches on the pavement.

I ran over and banged on her window.  With a look of sheer horror, she opened it up and said "Did I run someone over?".  "No", I replied, "You just hit a mattress".  She gunned the engine more.

"No! NO!" I cried, "back up!, it's caught!".  She put the Caddy in reverse and the mattress nearly unrolled itself on the pavement.

The four of us dragged it to the side of the road while the Caddy tore off.  It was a mess.  Criss-crossed with tire tracks, full of lumps, and a neat oil stain from the undercarriage of the Caddy.  No one was going to sleep on this mattress any time soon.

Mar said "We should get the heck out of here!".  I concurred and we all jumped in our cars and left.

When we arrived at Jill's apartment, we figured we'd have a humorous story to tell and that would be it.
When we arrived, they greeted us at the door.  "We're so glad you're here!  We can't wait for the new mattress!" they said.

"Well, about the mattress..." I started.

"Yes, the mattress!" Jill replied.  "I can't WAIT!  We threw out our old one two days ago and have been sleeping on the floor ever since!".

True story.  Poor kids slept on the floor for another month.  They eventually broke up.  I only hope that the mattress fiasco was not the cause!