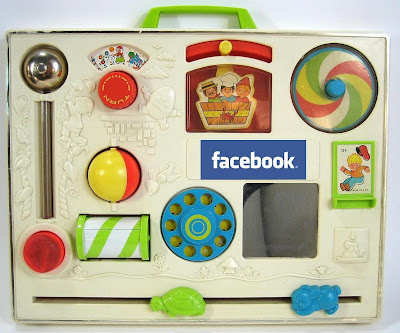 Facebook unveils its highly anticipated new user interface, allowing users to do several things, over and over again!
June 21, 2011 - Facebook once again makes headlines by launching its new, much-anticipated user interface today, which provides users with two or three new features to compulsively use over and over again while pretending they are being original and creative.  So far, most users have been enthusiastic.
"It's so cool, all the new stuff you can do!" says Human Resources manager Cynthia Twaddle of Reston, Virginia, "Ring the bell, spin the wheel, dial the phone!  I find I am spending even more hours every day on this time-bandit!"
The new interface allows users to do more than the three traditional activities on Facebook:  grooming your profile, making snarky comments, and spelunking the database to find out if that cheerleader you wanted to score with really did end up as a fat cow living a trailer park.
Now, in addition to a "LIKE" button, users can press another button and ring a bell, spin a multi-colored ball, or race a turtle and hare on a slide (There is one bug in the latter program - the turtle always wins - facebook developers are promising a "patch" to fix this shortly).
Facebook founder, the pimply and otherwise un-layable Mark Zuckerstein, is enthusiastic about the new interface.  "I can spend hours just looking into the new narcissism mirror feature!  It's great!" he said, "And this is just part of our overall plan to expand Facebook to provide more and more useful features in the future!"
There are, however, some users who are not happy with the overhaul.  "I wish they left it like it was before," said IT professional George Erstwhile,  between sips of his monster big gulp, "They got rid of the old wind-up crib mobile, which was so entertaining - I could sit and watch it all day long, batting at it with my flabby arms, always just out of reach!  This new interface, well, it requires so much work to actually use!  You have to push buttons, ring bells, spin dials!"
Some users reported that the spinning dial feature may induce a sense of nausea.  Facebook has responded by adding a warning to users that spinning the dial may cause dizziness in people susceptible to motion sickness.
And of course, many users complained about the sidebar ads, featuring Jack jumping over the candlestick warning that "You may be paying too much for car insurance!" and the three-men-in-a-tub touting the "one trick of the tiny belly!"  However, click-through revenues for these specious offers have skyrocketed since the launch of the Interface, raising hopes that Facebook may someday actually acquire advertisements from, you know, serious companies.
But other than these minor flaws, most users and social media commentators believe that the new Facebook interface will be a major hit, and sure to generate revenue for Facebook, which has yet to make a profit and has no realistic plans to do so.
"With this new Interface in place, I believe the market value of Facebook is at least 500 Billion, if not more - perhaps a Trillion!", one Social Media Commentator noted, "Clearly, the ability to allow users to squander time doing the same thing over and over again, while the company hemorrhages cash has to be worth more than the Gross Domestic Product of Spain!
The new interface comes just at a time when Facebook is losing millions of users in the US.  Social Media Commentators believe this new interface may just be the thing to woo them back.  Many young people are drifting away from Social Media, particularly as they graduate from College.  Local College grad, Sam Smith (not his real name)  is typical of this trend, dumping his Facebook account upon graduation.  When asked why he did so, he replied, "When I was a child, I spake as a child, I understood as a child, I thought as a child.  But when I became a man, I put away childish things.   And Facebook was one of them."
It remains to be seen if the new Interface will bring users like Sam back into the Facebook fold.....
Newer Post Older Post Home