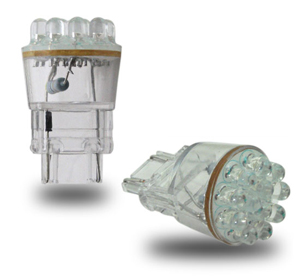 LED bulbs will last the life of a car.  However, the savings in fuel is pretty minimal.
A reader asks:


"If I install LED bulbs in my car (taillights, dome lights, turn signals, etc.) will I get better gas mileage?"

The lighting load and overall electrical load on your car is really not that significant - not enough to make a difference of more than a tenth of a mile per gallon at best - for all loads combined.  Going to LED lights might reduce your parasitic lighting loads by 50% or more, but the actual amount of energy saved pales in comparison to the energy used to accelerate a 4,000 lb. car from 0 to 60 miles per hour.

If you want to see significant savings in fuel, change your driving habits.  You can save 20% or more without too much effort.  Why?  Basic Physics.

To begin with the Force needed to move an object is equal to the mass of the object times the acceleration.  F=m x a.  So if you have a smaller, lighter car (less mass) it takes less force to accelerate to speed.

But note that if there is no acceleration - you are at a constant speed - no force is needed at all.  In a frictionless world, your car would coast down the highway endlessly at a constant 60 mph if you let your foot off the gas and put it in neutral.  In the real world, however, wind resistance, driveline resistance, and rolling resistance mean the engine has to put out 8-18 HP to keep the car at speed.

But the big energy hog is acceleration - getting up to speed.  And that's why city mileage is so much worse than highway mileage - you are constantly starting and stopping.  The hybrid takes advantage of this to recoup the stopping energy (regenerative braking) and re-used it to accelerate (via electric helper motor).  And as a result, Hybrids can get better city mileage than highway.

So how do you save gas?

1.  Accelerate gently:  Yes, the overall energy needed to get from 0-60 would be the same if you did it fast or slow.  But due to other factors of automotive design, a car generally consumes more fuel if you accelerate faster.  In addition, particularly in city traffic, if you accelerate slowly, you may find that the next light is red before you reach full speed, so you can let up on the gas and coast to a stop.

2.  Anticipate stops:  Most people floor the accelerator to a stop light, even when it is clearly red.   Then they jam on the brakes and turn all that kinetic energy into heat and a cloud of brake dust.  When the light turns green, they repeat the process.  When you see a red light, stop sign, or a light about to turn red, let up on the gas and coast to a stop.  No need to accelerate to a stop!

3.  Slow Down:  While a car, in theory, requires little energy to maintain 60 mph on the highway, at such constant speeds, the main use of fuel is in overcoming wind resistance.   Wind resistance is a function of the coefficient of drag (Cd) of the car and your speed.  And it is an exponential function.  It can require twice as much energy to go 80 as it does to go 60.  So going faster doesn't just use a little more fuel, it uses a LOT more fuel.  It also helps to have a car not shaped like a brick (Jeep, Hummer, Pickup Truck).  If you are using your car mostly for driving to work, consider something a little more slipstream-friendly.

4.  Use Your Cruise Control:  A car uses little fuel at constant speed.  However, if you are constantly speeding up, slowing down and then speeding up, your car will use a LOT of fuel.  And we see people drive like this all the time on the Interstate - roaring by you at 80, then slowing down to 60 to text someone and then roaring by at 80 again a few minutes later.  They can't understand why their gas mileage is so poor.  And it goes without saying that riding the brakes is a horribly bad idea.   Brake with your RIGHT foot, not your left, and the brake pedal is NOT a footrest!

The delta in fuel costs can be staggering.   We drove our E36 from Georgia to Florida, going nearly 80 mph the entire way, accelerating around slower traffic and then having to slow down for congestion and then speed back up again.  Gas mileage was in the lower 20's.  On the way back, we took Route 301, did about 55 mph the whole way, anticipated stops, accelerated gently, and got gas mileage in the mid 30's.  The punchline was:  overall travel time in each direction was about the same.

So I wouldn't worry about putting LED lamps in your car.  Mostly it is a cosmetic mod.  For a used car, they will outlast the car - they are good for 30 years or more, and your car likely isn't.  For a new car, they are a good deal, as they eliminate service worries and will last the life of the car.  But in terms of saving gas, the savings, I think would be pretty negligible.

I plan on putting these bulbs in the dome lights of my camper for two reasons.  First, the dome lights do get HOT and the heat is noticeable in the summertime.   Second, we dry camp sometimes and the camper is powered by one 12-volt deep cycle marine battery.  Lower-amperage LED bulbs will extend the useful life between charges by two to three times (days, not hours).

But to save gas?  No, I don't think there is a payback there.
Newer Post Older Post Home