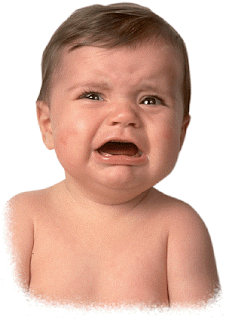 Americans are such crybabies!

In the comments section on a CNN posting about the economy, was this whining plea from a crybaby American:

"Things are so bad, we had to get rid of Cable TV!  My wife and I had to switch to a pay-as-you go cell plan, and we don't give the number out to anyone!  We hardly talk on the cell phone anymore!  We have cut our restaurant dining in half!  We hardly get to go to restaurants anymore!  And when we go on vacation, we stay close by, because of the price of gas!  Times are tough!"

Am I the only one whose irony-meter has pegged here?  Times are tough because he can't eat as many restaurant meals, go on lavish vacations, and use electronic gadgets?  That fellow really needs some perspective in his life.

What do you bet, like any typical American, he is 50-100 pounds overweight as well?

Compare his plight to that of a child in sub-Saharan Africa.  You think the cell service is bad where you are, buddy!  That kid in Africa is lucky to get ONE BAR on a good day!

Oh yea, and that whole staving-to-death, being shot by rebels, and disease bit.  That.

And yet Americans whine when they can't text each other.

What makes me have very little sympathy (or none) for the fellow is that these are all "sacrifices" or cuts to my budget that I have already made.  I use a Gophone AT&T plan which has cost me $12.50 over the last three months.  And I stopped watching Cable TeeVee ages ago.

Um, Cable TeeVee - the training ground for crybaby Americans.  The TeeVee tells you, over and over again, what a put-upon victim you are, and how you have a right to cheap gas.

The secret to happiness in America - or anywhere - is to stop thinking of life as series of entitlements - which the government and the TeeVee will both promote.  Learn to live on less, enjoy more, build wealth, and not think of your life in terms of owning crap or spending money.

Materialism is a false God, and to worship materialism will only cause pain and grief.  Because no matter how much crap you have, there is always more crap, just out of reach.  And when they come and take it all away (and they always do) you will grieve for your life and realize how you let it slip by in a series of monthly payments.

Real wealth is not found in having the latest gadget or car.  And whining when you can't have the toys you want is, well, disgusting.

Americans sometimes don't understand why people in the rest of the world don't like them.  And comments like the one above are the reason why.  The fellow complaining about how bad his life is, is in the top 90% income for the planet.  His comments are echos of Marie Antoinette, bitching that the Champagne is too warm, while others starve.

I am grateful every day I wake up.  I am one of the few fortunate people on this planet who doesn't have to scramble every day to get sufficient caloric intake to stave off death.  I can live a healthy and luxurious life, without much effort, compared to most people on this planet.  And I have opportunities that most folks in the world only dream of.

To complain that the banquet is inadequate while others are starving, seems to me to be, well, obscene.

And compounding this, of course, is that the hardships complained about, in addition to being trivial, were largely brought about by their own malfeasance.  Saving money and building wealth is a choice, plain and simple.  And you can't spend your way to wealth.

The great sacrifices our complainer has made are all things I started doing years ago, not because I necessarily was desperate - but because I didn't want to wait for things to get worse before taking action.  I realized that cutting back on spending and saving more was a personal decision - a choice - that would result in a better personal outcome for me.

$100 a month for Cable TeeVee is a heck of a lot of money in the bank over 40 years (like a quarter-million dollars).  And it is a choice, to be sure.  And you'd be surprised how many crybaby Americans would argue otherwise - that Cable TeeVee and a texting plan are like oxygen - and you can't live without them!