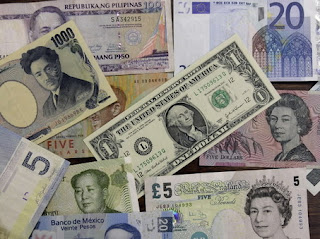 When traveling overseas, or even making a purchase or reservation from an overseas vendor, you may be socked with fees by your bank.


In the olden days, when I was born, before the turn of the Century, we were always told to use your credit card when traveling overseas, as you got the best exchange rates, with no fees tacked on.  That was the olden days.  This is now.   Today, banks and credit card companies tack on a lot of fees for using Credit, Debit, and ATM cards overseas - even in places as exotic and far away as Canada. There are flat fees, there are currency conversion fees, and even the merchants may add on currency conversion fees.  These can be as much as 8% of your purchase!  So it pays to understand these fees - and ways to avoid them - before you travel or make a purchase from an overseas vendor.

I recently made a reservation on the Car Ferry to Labrador, Canada, using my BoA Debit card.   The charges turned up on my account a short while later, converted from Canadian Dollars to U.S. Dollars (at a conversion rate of 1.028 which is not bad).   But then, separate charges appeared for "Foreign Transaction Fees" of exactly 3% of the amounts charged.

What's up with this?  And how do you avoid this?  With regard to the latter question, these fees are hard to avoid.  As this site notes, most banks and credit cards charge fees for using overseas ATMS, using your debit card overseas, or even using your credit card overseas.  As I noted in my previous posting on wire transfers, it seems that moving money across international boundaries always seems to involve fees - even cashing an overseas check results in fees being applied.

Credit cards are often no better - VISA apparently adds a 1% fee and the bank issuing the card may add another 1-2%.  On top of that, the merchant you are buying from might add a "Dynamic Currency Conversion" fee of up to 5% to the total of your purchase.  Since you may be buying souvenirs in Euros and not understand the conversion rates, you may not even notice that the transaction was more costly than anticipated.

As it turns out, I was lucky that only BoA socked me with a 3% fee - the merchant could have added a DCC fee of 5% on top of this!

What is up with this?  As someone who has to pay overseas suppliers in Euros or Yen and then invoice clients in Dollars, I understand the problems involved - and the real costs.  First, there is the hassle factor - having to obtain currency conversion information, apply it to the invoice and do the conversion.  VISA of course has a computer to automatically do this, but for smaller merchants, it is a manual affair.

Second, since there is an inevitable delay between the time you invoice and the time you get paid (and pay your suppliers) the conversion rate in your invoice might end up being off, by the time money actually changes hands.  And in the past, I have seen Euro or Yen conversion rates fluctuate by as much as 10% in the 2-3 months it takes for a client to pay me - so I can pay the European or Japanese Attorney.  If the conversion rates are not in your favor, you can end up losing hundreds and hundreds of dollars in the process - essentially working for free.

For that reason, most merchants - myself included - add a "Dynamic Currency Conversion" factor - of several percentage points on top of the regular conversion rate - to compensate for the hassle and risk of fluctuating currency exchange rates.  If rates are static, or move in your favor, obviously this means more money for the merchant.  I was never comfortable with this idea - and the idea of losing money doing it the other way - which is one reason I try to get my clients to pay overseas attorneys directly and leave me out of it.   It also insures that the overseas attorney is paid more quickly, too.

And by the way, there is no fixed "Currency Conversion Factor" that people have to honor as a matter of law.  Currency markets fluctuate, but no one is bound to offer the lowest and best conversion rates to you.  Conversion of currency is up to the parties involved, and the market rates are only a guideline, not a number anyone is bound to, by law.  People moving large sums of money might get the best exchange rates, but you, the consumer, exchanging a 20-Euro note in at a tourist kiosk, is not going to get that rate.

Back in the day, when the American Dollar was worth more than the Canadian Dollar, when you traveled to Canada, most merchants would take US Dollars - but at an exchange rate of 1:1.  If you didn't like it (the Canadian Dollar was worth maybe 75-90 cents back then) you could walk away, go to  local bank and covert your money and come back, or just say "to heck with it" and sacrifice the difference for a matter of convenience.  And a lot of people did the latter.

So the DCC rates are not some sort of scandal, but rather what the merchant chooses to charge - and what you agree to accept.  If you are making a purchase overseas, ask about DCC rates and then make an informed decision whether to pay cash, use a credit card, or just walk away from that merchant.

NOTE ALSO:  If a merchant, say in France, asks you, "Do you want the bill in Euros or Dollars?" say "EUROS" because if you say "Dollars" they will charge their own conversion fee - which is not advantageous, and then your bank adds the 3% foreign fee on top of that.   Tricky, those French (just kidding, this happens everywhere in the world).  Charge in local currency and let your bank do the conversion, not the man at the souvenir kiosk.

So what options do you have?  Are there cards that charge less fees?

American Express made its name in the travel game and in the past had no fees.  Their traveler's checks, card, and foreign travel offices were once a haven for regular travelers.   Today they are at 2.7%, which is pretty substantial.   Amex no longer really is a lucrative travel option.

Most credit cards and banks seem to charge in the neighborhood of 1-3%.  There is one exception, however.....

Capital One (what is in your wallet?) seems to be the best of the bunch - charging no fees whatsover:

Capital One does not charge a fee for using your credit card for foreign currency transactions. Foreign purchases will be converted at the foreign exchange rate in effect at the time of posting the charge. Before you travel, please call us at 1-800-955-7070 and have the following information handy:
Your account will be updated with this information within two business days. If you need to contact us while traveling within the United States, please call the phone number on the back of your card. If you need to contact us while traveling outside of the country, please call our international collect phone number, 804-934-2001. You will need to place a collect call through an operator, and Capital One will accept the charges. Please note: be sure to use policies for outbound dialing that are appropriate in the country where you are traveling.

So it looks like we will be using our Capital One card when we head North next month!

UPDATE:  We use Capital One when traveling in Canada exclusively now.  No fees like with BoA.  BoA will waive the 3% fee for "Platinum members" but you have to call and request this and have your statement ready and read the transaction numbers over the phone and then wait several days for the fees to be credited.  Easier to use Capital One!

Of course one option always is to take cash with you and convert it to the local currency (or convert it before you leave).  Of course, many currency exchange places, particularly in tourist areas, often add a percentage or two to the exchange rate, to make a little money on the side.  You can't expect them to work for free.  Local banks may offer better rates, but they are often located outside of tourist areas, and certainly not near the airport or other convenient locations.

As with anything else, it pays to do the research first, before flying off on vacation.  A 2% or 3% fee may sound pretty insubstantial, but if you spend a few thousand dollars overseas - renting a car, paying for hotel rooms, airfare, cruise ship charges, food, souvenirs, - whatever - the transaction fee costs can easily add up to over a hundred dollars - perhaps hundreds.  That may not sound like a lot of money from the big picture, but it is enough to pay for your long-term parking and all those poorly mixed and overpriced martinis at the airport bar.

ATM cards have similar problems - if not worse.  For Bank of America card holders, you can use your ATM card overseas at participating Global ATM Alliance banks - however, the 1-3% currency conversion fee still applies, as with using a BoA Debit or Credit card.  However, by using a Global ATM Alliance bank, you at least avoid the $5 overseas transaction fee, which is waived.

Update:  Some banks part of this alliance have apparently dropped out.  I recently got cash from Scotia Bank and was charged an $8 fee in addition to BoA's $5 fee.  Good thing I was taking out $500 and not $20!

Check out your bank's website before traveling, to see what fees you may incur.

I am glad I researched this.  These transaction fees are a bit annoying and detract from the overall enjoyment of a vacation.  If I had researched this sooner, I could have avoided those currency conversion charges on the Marine Canada payment for the Ferry as well as those currency conversion charges for all those beers we bought at the Atlantis resort....
Newer Post Older Post Home