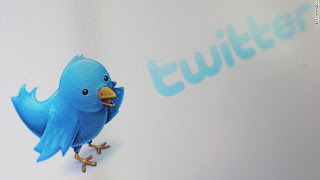 The founder of Facebook is purportedly a Twitter addict and wants to make Facebook more Twitter-like.  Twitter, on the other hand, wants to be more Facebook-like.  What is the future of this "Social Networking " craze, and are you going to invest 80 hours of your life moving your profile, friends, photos and other online detritus from Facebook to Twitter?
The article on CNN predicts that Twitter will be the new Facebook.  And I have no reason to doubt this.  After all, Facebook was the new MySpace, and MySpace was the new Friendster.  Wait 10 minutes and the "Next Big Thing!!" is coming down the information superhighway.

The article posits that by "embedding" Twitter into  Apple iOS 5, it will force users to start using Twitter.   This may be true, it may not be.  Already, I am annoyed when I go to a web page and see Facebook and Twitter links prominently featured, or a company with a notation of "Follow us on Facebook!" - as if I could go to Facebook and order their products or something.  Social networking sites are less than useful for businesses.  Do I really need to read about how the head of marketing is off to a junket in Japan? How does this help me order a left-handed metric adapter from their site?

But moreover, I think people naturally resist things that are "embedded" into applications or hardware, particularly if they feel they are being sold something or have to watch ad content.  We bought a new cell phone a few years back, and it was programmed to feature, prominently, the phone "store" where you could download ringtones and other crapola.  And you could not reconfigure the phone to get rid of this junk.  You want to hit "play messages" and the default page is "buy ringtones".   It was less a phone than a marketing tool.  This is one reason I have kept my old clunky Motorola phone - I can program the pages, not the marketing department.

Who in their right mind likes being manipulated and marketed to - particularly when the efforts are so clumsy and apparent?  (Google is quite more subtle in this department).

But the odd thing is, even Facebook's founder admits to liking the short format of Twitter.  I have see people's Twitter pages, and I just don't get it.  It is just these short, cryptic - Ambiguous - communications.  It is the Internet for Passive-Aggressives.  It is people passing notes in class and snickering at the ugly girl in braces.  It is all fluff and no content.

So what's next?  If Facebook's Farmville updates are too "long format" for people these days (heaven forbid they should read my blog.  Most visit this blog, read the first 140 characters, and then fire off a flame comment - idiots!) then what is next for the Internet?

Yes, that is where it must be going.  An online social community where you communicate in single alphanumeric characters.  Today is sponsored by the letter "A".

But my curmudgeon humor aside, I do think the article illustrates the vulnerability of Facebook - and why it isn't worth 50 billion dollars or whatever.  It is cool now, but websites based on a "cool" or "hip" factor are like trendy bars in New York City.  They might seem like permanent institutions, with a line around the block and everyone who is anyone dying to get in.  But you go the next week, and they are closed.  It happens to all of them, eventually, even Studio 54.  Hip becomes un-hip.  Trendy becomes Passe.  And a social site - which has no real economic function other than Internet recreation - can come undone in a hurry.

So will Twitter be the new Facebook?  Who knows?  Who cares?  All I can say is, neither company makes any money and in the long run, you have to make money to survive.  And the efforts to make money (promotional tweets, sidebar ads) are just the thing that drive customers away.

I don't tweet and I no longer Facebook for that very reason.  I realized that early on, these were just yet another vehicle to capture your eyeballs and sell them to advertisers - and often odious advertisers at that.  Internet ads are annoying - perhaps more annoying than television ads.  So I logged off Facebook, and most people, I suspect, when they get older, will find it less and less interesting.

And if you look at the demographics of this country, what does that tell you?  That perhaps a Geezerbook, with super-large fonts and side-bar ads for adult diapers, may be the next Facebook....

Note:  This Article claims that Facebook lost 6 Million users last month alone.   This includes only users that they have lost (closed accounts) not necessarily people who just stopped using it, as I did.
Newer Post Older Post Home