No "Happily Ever After" with Drug Use 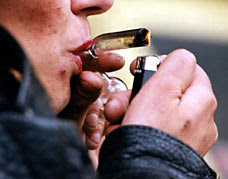 There is no happy ending with drug use, which is probably why it is illegal.
Today, we were talking about drug use and people we know who did drugs.  There is no such thing as an old drug user - particularly with hard drugs.  You decide to do crack, heroin, methamphetamine, and basically it will kill you, in fairly short order.

The topic of conversation was a local campground owner who was foreclosed upon.  The rumor is, the owners made a lot of money, and decided that developing a crack habit would be a good idea.  Odder things have happened.

As I mentioned before, I had a friend whose husband, while in law school, decided that a little crack wouldn't hurt.  Before long, he wanted to spend the mortgage payment on crack.  She demurred on the grounds that the mortgage would then be unpaid.  "Yea, but we'd have a lot of crack!" was his reply.

And it got me to thinking - there is no happy ending with drug use.  There are no methamphetamine success stories, no happy-go-lucky junkies, no crack addicts on the pipe in the old folks home.  The only outcome is depravity, poverty, ill-health, and death - an early death.  And rarely are such drug users happy, except for the brief moment when they first get high.

Yea, people ruin their lives with alcohol, too.  But at least it is possible to drink a glass of wine with dinner and not automatically end up on the road to homelessness.  It is possible to drink yourself dead, of course, but not mandatory.   With drugs, the outcome is always preordained.

Marijuana, as I have written about before, probably won't kill you, but it won't make you happy, long-term.  We are now seeing that mental health issues like schizophrenia may be enhanced or induced by early and chronic marijuana use.  But you don't need a medical study to understand the real effect - you just have to ask yourself - do you know any happy long-term marijuana users?

And the answer is generally a resounding "No".  Most are marginally employed or unemployed, and will regale you for hours about what a sucky deal they got in life.  You never see a rich marijuana user - most just scrape by - barely able to afford their drug of choice. . . .

OK, that was weird.  I started writing this blog entry and the phone rings and a friend is on the line.  We had just returned from the beach with another friend (more of an acquaintance), and apparently, that friend is now "lost" on the island and can't find his way home.  So we get in the car to go rescue him, and find him in the church parking lot passed out.  Some fun.

So we roust him out of the car and put him in the passenger's seat.  We didn't have that much to drink, did we?  I'm feeling fine.  He is in a fugue state and mumbling incoherently.  "I have to get back to the store, the store is in trouble!" he says, "Suzie always fucks up the cash register!".

I try to reassure him that things are going to be OK (this is reminding me a lot of my childhood, with my Mother, which is creeping me out.  Did enough of that for one lifetime, thank you!).

This is starting to freak me out.  He is incoherent and doesn't even know who I am.   And apparently, unbeknownst to us, he is a coke head.  We get him back to his apartment and he lies in a fetal position on the couch, mumbling incoherently.  He gets up, takes a pill out of the refrigerator and tries to snort it.  We stop him.

He digs through a bag and gets a glucose pill and takes several of those.  He perks up, takes a blood test, and his blood is reading 187, which is supposedly normal.  He seems to be coming around.  We finally get him up and in the shower, and he seems much better.  He tells us he tried to snort one of his diabetes medication pills, as "he thought it was an Esctasy tablet from Chris."  I do not know who Chris, is, but I do not like him.  In fact, if you are Chris and you are reading this, expect a punch in the face if I ever meet you.

We finally get him settled down and tucked into bed.   Should we call 911?  He knows who we are now, and says he is very embarrassed.  It appears that he has multiple medical problems as well as a drug problem.  Some fun.

We bailed his ass out of trouble, but I wonder if we would have been better off letting Officer Powell run him in - he would have to confront his problems then.

But it makes me sad, seeing a nice person ruin their life like that, and nothing I can really do about it.  And no, I do not like bailing out drug addicts from their problems all the time.  And with his health problems, I can tell you, this ain't gonna end well.  I only have one funeral suit, and it don't fit so well.

But hey, what am I saying?  Drugs are always a lot of fun, because they get you "high" and there is never, ever a downside, right?  Right.

So kids, keep doing drugs!  Because in a few short years, you too can be an annoying pain in the ass to your friends and family and make yourself miserable in the process!  Some fun, right?  Because, let's face it, you don't experience enough pain in life as it is, right?

I need to get to bed.  This was one freaking strange night!
Newer Post Older Post Home