No Vacation Nation (not for me!) 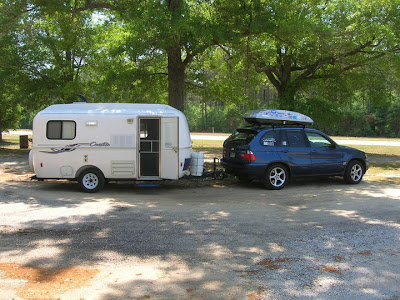 Our camper might not be very large, but we can afford to take two month's vacation in it.  Doing things is better than owning things.

In this recent story on CNN, entitled No Vacation Nation, they point out what our European friends have known for years - Americans don't get a lot of time off.  While most Americans get two weeks off a year, our European friends get 4, 6, or even 8 weeks vacation a year.  Only government employees with a lot of seniority get that much vacation in the US!

Why do our European friends enjoy life more and work less?  The answer is simple - we Americans obsess about owning a lot of crap more, and thus enjoy life a lot less.  Let me explain.

And we spend large on restaurant food, but most of it is crap - badly made fried foods that are brown, yellow, or orange, washed down in a sea of lite beer.  That is America to most people, and they can see no other way to live.  They actually think it is "better" than those "funny little foreign cars" and that "gourmet food" those fussy Europeans eat.

Our European friends have fewer things, but they are of higher quality.  They have more fashionable clothes, more sturdily built cars, and fantastic leather accessories.  They don't have four cars, two boats, a jet ski and a motorhome parked in their front yards, of course.   They own a lot less, but what they own is quality.

I think the European mindset is to enjoy the experience of life, and not try to own it.  I doubt you'll ever see a bumper sticker that says "He who dies with the most toys, wins" in Europe.

To the European, the point of things is as a means to an end, not an end in and of itself.  And with such beautiful places to live and work, life is enjoyable without having to try to "own it all".

So yes, Germans will come to America and rent a motorhome.  But back home, they don't have one parked in their driveway, generally.  And odds are, they spend more time in that rented motorhome on one vacation than most working families spend in theirs over a period of years.

Getting off the "owning things" bandwagon allows you to take time off.  It is true that time is your most precious commodity, and you have to PAY for your own free time.  And the more crap you own, the more you have to pay to not work - as the bills for the payments, insurance, storage, and maintenance on all that CRAP pile up over time.  You need to make $100,000 a year, just to keep up with the payments - living "paycheck to paycheck" as so many do.

On the other hand, if you live debt-free and not own a lot of crap, well, you can live on as little as $25,000 a year - and taking time off is not all that expensive to do.  Your time is cheaper to buy, and thus you can afford to own yourself.

When I was younger, we followed this advice.  We owned a lot of investment property, but our personal residence was modest, and we drove older cars and had an old boat ($5000) and an old trailer ($6500).  We could afford to take a month off at a time and travel.

But we got caught up in the hoopla of owning more and more - and pretty soon had two fairly expensive boats, a vacation home, several cars, and so on.  What we found out was that just cleaning and maintaining all of this "stuff" was a lot of work and money.  And since we had to work so hard to pay for it and to maintain it all, we could never get away for those great trips we planned.

So we sold it all and scaled back to the good old days.  And it was the best move I ever made.  Having a lot of things was fun, but it was a lot of money and time, too.  Now we can work less and play more - and isn't that what life should be for?

What is even sadder than the vacation statistics in the CNN story was another story on NPR about how many Americans, when they do take time off, go on a "Staycation" - staying at home and sleeping late, watching TeeVee and getting "caught up on their laundry".  They are so deprived of relaxation time that all they can think of to do when not working is to, well, not work.

Our European friends read stories like this and think we are idiots.   And they are right.

Even people with lots of time off rarely use it wisely.  I know Patent Examiners who have 6-8 weeks of vacation a year (one of the few perks of working at the USPTO a long time).   Some of them never take their vacation, saving it instead for a "lump sum payout" at retirement.   Like most Americans, they covet money more than free time.  It is a good plan, except that you have to hope you live long enough to get that big lump sum check.

Similarly, most school teachers have the summer off, and yet most work jobs to make "more money" even though they make good salaries as unionized teachers.  Good salaries, but they want more - because a better car and more channels of cable TeeVee is the end-all to life.

And TeeVee is probably where they get these normative cues. After all, everyone on TeeVee is buying a $40,000 SUV, so why shouldn't they?  But expensive toys are little more than gilded handcuffs.  In addition to the "most toys wins" bumper sticker, another popular one is "I owe, I owe, so off to work I go" - and people work like dogs so they can have a fancy car to drive to the office.

When I lived in DC, we had a clapped-out $800 BMW 2002 that I bought and tinkered with, and it was interesting to drive it to work on cooler days (it had no A/C, of course).  The reaction of other commuters in their leased Acuras and Lexuses to my primer-brown beater was interesting.  I was driving off to my own law practice, and no doubt many of them were low-level clerks in government offices.  But they were convinced by nature of shiny sheetmetal that they were "better" that me.

Appearances, of course, can be deceiving.

Many of my fellow Attorneys followed the "dream" career path, working 60 hours a week to make partner and then working 80 hours a week as partner, eventually divorcing their spouses and marrying their secretaries (why not?  They see them more often).  While they make the fabled $250,000 a year or whatever, most sound very sad when you talk to them.  They have no time off, no life and are generally not very happy.  The fabled riches they chased after never materialize - their cost of living escalates as their income rises.  Perhaps they will enjoy life in retirement - perhaps not - but provided they live long enough to do so.

It seems to me that somewhere along the line, we got sold a bill of goods.  And this idea occurred to me early in life, as a child.  School, to me, was little more than a training ground - training us to accept the notion that we have to spend 6-8 hours a day in a stuffy overheated building, when it is a beautiful day outside.  School trained us to think of time in terms of days of the week and weekends as some naturally occurring phenomenon, not an artificial construct of man.

Once they have us yoked to the harness, it is far easier to geld us and train us as draft animals - working 40-60 hours a week for 40 years, with the promise that, if we only pull a little harder, we might get a shiny new harness to wear, and eventually, will be allowed to graze at pasture for a few short years, before we are dragged by the hooves to the knacker's van.

Escaping from all of that is really quite simple.  You just have to change your mindset to realize that the most valuable thing you own is yourself - not what is parked in your driveway, and not your granite counter-tops or a fancy gabled house.  Owning yourself is as radical a concept as owning money - and yet most people own neither.  But they sure have a nice car!

Our two-month sojourn this summer will take us to Nova Scotia, Newfoundland, and Labrador.  Why?  Well, why not?  It has to be cooler than Georgia in the summer (and Georgia in the summer is cooler than Washington DC in the summer!).  It is an expensive trip?  Hardly - the main costs are fuel and fees to stay in provincial parks, and the occasional ferry fee.  But food and beverages, well, that is the same cost as staying at home.

The major expense is being able to afford to "not work" for a couple of months.  And in order to be able to afford to do that, all we had to do was not be in debt to six different agencies that required steady monthly payments.  It really was that simple.

Of course, some will say, "Well, my job only gives me two weeks off!  I have to have this high-paying job to afford to put my kids through college!  You have choices!  I don't!"

But that is more weak-thinking, I'm afraid.  Once you get on the hamster-wheel of the "job" you start to see it as the end-all of life.  I need a job to pay for my house.  I have to have an expensive house, because it is near my job.  I need a fancy car to get to my job, because a person in my position needs a fancy car.  And I need my job to pay for all of this - it is circular logic and circular reasoning at its worst.

We all have choices, whether we perceive them or not.  If you choose the job/house/car/commute, then fine.  But don't act like it wasn't a choice, but rather some construct that was thrust upon you.  You chose that lifestyle, it didn't choose you.

America is the "No Vacation Nation" not because of government policy or some conspiracy of the "evil corporations" to keep us all working.  No, it is that way because we chose that path - we opted for more money and more toys as being better than less things and more time.  After all, the way we work, we "get more" - right?

I think it all depends on your perspective of what is "more".
Newer Post Older Post Home