Everyone Hates a Winner! 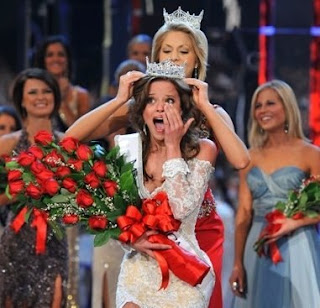 "Americans love a winner and will not tolerate a loser. Americans play to win all the time. I wouldn't give a hoot in Hell for a man who lost and laughed. That's why Americans have never lost and will never lose a war. Because the very thought of losing is hateful to Americans."  General George S. Patton, Jr.

A lot has changed since Patton's day.  Or perhaps maybe not much has changed, much to Patton's disgust.  After all, he was the General castigated for slapping a Private.

Americans hate a winner these days - being a victim is a much more desirable goal.   And in fact, if you really want to be a winner, it helps to have a victim background - so you can say you "overcame adversity" or whatever, and diffuse the winner-hate mentality.

Maybe you hate winners, too.  Do you feel a resentment toward large "multinational" corporations?  Do you hate McDonald's (not the food, the company)?  Do you grouse about how everyone else is "making out like a bandit" while you have to work hard and get the screw-job?  Do you complain about "Wall Street Fat Cats" or "Big Government" - as if those were the sources of your personal problems?

I came from a family of such weak thinkers - classic "limousine liberals" who were wealthy, but felt sorry for the poor (and perhaps were overcompensating for a feeling of having unearned wealth).  My family always felt sorry for Blacks - not that we ever knew any, of course, other than an occasional maid.  After all, we always lived in exclusive, all-white (and all-Gentile) communities.  The hypocrisy factor, of course, failed to register with them.

It is a funny thing, but in my family, the greatest ambition you could have was to be a colossal failure.  If you failed, you got attention, reinforcement, special treatment, and of course, money.  But if you succeeded, all you got was a "great, good going" and that was it.

And I am not singling out my family for special abuse (would it be that I could, it would make Gitmo look like Disneyworld) - most middle-class and upper-middle class white liberal families work along the same line.  Parents identify one or more children as being damaged goods early on, and then lavish attention on them.  "Normal" children or successful children are then ignored.  Not surprisingly, children in such families tend to be horrendous under-achievers.

In the wealthy liberal enclaves I grew up in, not surprisingly, many of the children were under-achievers and lived with their parents well into adulthood.

When you reward someone for underachievement and provide no reward - or punishment - for achievement, then it follows - as night follows day - that people will tend to underachieve.  And this is a very typical phenomenon.

The Glen Miller Story, starring Jimmy Stewart, sort of makes a long-running joke of this.  In the movie, his Father runs down or trivializes his son's accomplishments at every step.  When Jimmy Stewart (as Glen Miller) moves out to Hollywood and buys a large mansion, his Dad has to criticize it as being too costly to own and maintain.  It is only when Steward explains that the mansion is paid for, that his Dad finally starts to come around.  But that is a tacked-on Hollywood ending.   In real life, Dad never comes around - he will belittle whatever you do, forever.

And you see this plot line repeated in many movies - and it reflects a reality for many of us.  I know of a number of people who have gone through this, themselves - having their career choices or spousal choices continually run down by their parents or other family members.  And ironically, it makes no difference how successful you are - in fact the more successful, the more doubt will be cast upon your life.

Insecurity is often the major reason.  Parents will always view children as small, weak, and stupid, and something that they own.  Parents say that they want their kids to be "more successful than I was" - but rarely mean it, and often sabotage their children's lives to keep them dependent.  The epidemic of 30-something pot-smoking kids, living in their parent's basements, is testimony to this effect.

Friends can be no different, and in fact worse.  As I noted in an earlier posting, when I decided to buckle down and finish my Engineering Degree, my party-boy friends did not take to this kindly.  And this is not surprising, either.  When a peer becomes more successful than they are, it puts in dramatic contrast how unsuccessful their lives are.  This cannot be tolerated.

You tend to run into this with siblings and older friends, as well.  It is hard for some people to accept that someone who is 5, 10, or 20 years their junior, can be smarter, wealthier, and more successful than they are.  After all they are just "kids" - right?  And they are adults - older and wiser.  Well, older, anyway.

I have some constructive and healthy relationships with some older people here on the island - which is hard not to do, as the average age here is 74 and we are some of the youngest residents here.   But there are some folks, not very much older than us, who tend to look as us as Freshmen, and they are the Seniors, and believe we need to be hazed.  Hanging out with those sort of people is problematic, as they tend to be condescending towards you because they believe, by virtue of age alone, they are superior.  And since relative ages never change, you will never have a peer-to-peer relationship with such a person.

Similarly, you can have an older sibling who is an abject failure and a drug addict.  But since they are older, they will look down on you, even if you are a Doctor (the real kind, not a PhD.).  You can't ever get any respect from people like that.  They want to continue to re-live the childhood family and not move on to an adult relationship.  And often, if you refuse to play along with their scenario, they will lash out at you.  Again, often your success in life merely serves to highlight their failures.

For example, a friend of mine was raised by his Sister, after his Mother died at an early age.  He and his Sister were fairly close, when he was growing up and in High School.  She was married and had children and was the center of attention of the family.  But then my friend went away to College - far from their rural small town - and never returned, except for occasional holidays.  He got a good paying job and settled down in the big city.  You would think Sis would be happy that he found his place in the world.  But, no.  Rather, she became angry and started all sorts of rumors about him, and moreover refused to speak to him, accusing him basically of being a "traitor" for leaving their small town.

And in advice columns and the like, you read letters from people who let relatives, parents, and friends walk all over them like that.  Sometimes they even give up promising jobs, careers, or even spouses, to placate the vague objections of family members, parents, or friends.  It all sounds like a Tennessee Williams play...

And it can also work in reverse, I suppose, as illustrated by Rock Hudson, in All That Heaven Allows.  - where a widowed Mother forgoes marriage because of vague objections of the children.  Why people let family members dictate their personal happiness is beyond me entirely.

Fr the life of me, I cannot figure out why - why someone would sacrifice their happiness and future to appease the sensibilities of someone they really only knew for a few years of their life.  It makes no sense at all.

And of course, people who do this, end up being victims themselves, and then run down anyone who is successful.

Personal success means not being threatened or intimidated by the success of others.  No matter how successful you are, there is always someone more successful.  Even Warren Buffett must lie awake at night and says "What does Carlos Slim have, that I don't?  I try so hard to be a good Billionaire, and this Mexican out does me!  What is the point of it all?"

There will always be someone who at least appears to be doing better than yourself.  Sour grapes really doesn't improve things for you, but serves only to make you look petulant.  It also is a prime symptom of chronic depression.  And of course, the largest reinforcement of these poor normative cues is, you-guessed-it, the television.  The television thrives on your need to feel sorry for yourself and to run down others.  And the more you do it, the more depressed and unsuccessful you will be.

Is the fear and jealousy of success negatively affecting your life?  Take this simple test:

1.  Do you like to run down major Corporations like McDonald's or Exxon as being corrupt or evil or whatever?  (Worse yet, are you the prime consumers of their products at the same time.  Double your points for hypocrisy).

2.  Do you secretly enjoy reading celebrity gossip magazines or watching celebrity television shows, where celebrities are show as being fat, slovenly, drug-addicted, getting a divorce, or facing some other adversity?

3.  Do you feel entitled to a job, a home, or government money?

4.  Do love to talk dirt about your friends (are they really your friends?) when they are not around?

5.  Do you enjoy what the Germans call it Schadenfreude  - taking pleasure in the misfortune of others?

6.  Do you believe that "but for" the actions of Wall Street Fat Cats, the Government, Big Business, the Unions, or some other large, faceless, organization, that you would be wildly successful?

If you can answer "YES" to 2 or more of these questions - consistently and on a day-to-day basis, then perhaps you are a Winner-Hater.  Chances are, you are real fun at parties and a real drag to be around.  Because you spend most of your time just running down those who are successful, instead of looking inwardly at your own problems.

If you are successful, and find that people resent your success - don't sweat it.  This is normal human behavior, to some extent, albeit exaggerated in our culture, due to the prevalence of Television and the promotion of Victim-think.

The best thing you can do, for your own psyche, is to walk away from people who run down success.  Whether you are successful or not in your own life, hanging out with people who hate success is never a recipe for happiness.  They will be an obstacle to your own personal success, and moreover, if you do try to become successful, they will do everything to stop you.
Newer Post Older Post Home