Spare Change? What do You do with it? 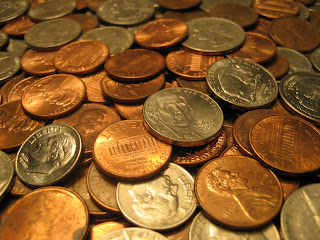 Some folks go to a change machine at the bank or grocery store and throw in their change and get a slip which can be redeemed for paper bills.  This works fine if your bank does this for free.  But some banks and those machines in the grocery store charge 5% or more for the privilege of counting your money.  And of course, the machines are expensive and have to be serviced and there is a cost associated with the paper rolls and handling.   But what other monetary transaction would you do that takes 5% off the top?  - that's worse than accepting credit cards!

Others roll their own coins and take them in periodically, which is time consuming and unless your local bank gives you some paper rolls, has some costs as well.  And many Banks won't accept rolled coins unless you are an account holder (believe it or not, some folks fill them up with slugs!).

Still others, mostly old ladies, carefully count out change from a change purse, and pay the exact amount due with each purchase, and seldom end up with more than a dollar in change in their pockets.  This works OK, but takes a lot of time and foresight, and also makes cashier's and customers behind you impatient - the often make snide remarks as you count out your pennies.

Some folks give the change away to panhandlers, figuring that it helps the homeless and alleviates their pocket of a burden.  But most panhandlers have mental health and drug abuse issues, and giving them 50 cents is akin to giving them a ceremonial bullet to blow their brains out with.  And as I illustrated before, it is a wasteful way to donate to a charity.  Donate to a shelter instead, and your money does more good, and for each dollar you donate, you spend maybe 70 cents (due to the tax deduction) and thus can donate more and do more.

Some folks put money in a jar on the counter of the store - a jar touting a charity of some sort.  But again, since such donations are not tax deductible, you are not maximizing the benefit to the charity.  And since you cannot investigate the charity in question, it is highly probable that they are raking in a lot of money - and spending it mostly on their own salaries.

Some folks save up their change in huge carboys or jars and then use them to buy a big ticket item, like a car.  For example, this fellow saved up $26,000 over 13 years, in change, to buy a truck.  Does that make sense?  Perhaps not.  And there are some odd things about that story...

But taking that aside, presuming the fellow pays cash for gas, food, cigarettes, beer, bowling - everything - and spends a lot every day and ends up with $5.50 in change (that's a lot of spending in my book, but that's another story), is putting it all in a jar for 13 years a smart move?

Don't get me wrong -paying cash for a car is a good thing.   But I am not sure that saving $5.50 in change per day is the way to go about it.  For starters, it indicates that the fellow has a LOT of transactions during the day to generate $5.50 in change.  If we assume the average amount of change is about 50 cents, this means at least 11 cash transactions.  I am not sure how I could come up with that many, even if I tried to.

Second, the lost opportunity to make interest on the money is significant - over $10,000 lost in interest alone - or 1/3 of the potential gain.  That is a lot of wasted money, keeping pennies and nickels around.  Buying a car with spare change is an interesting stunt (and good publicity for the car dealer) but is not a smart financial move.

What do I do?  I keep a petty cash drawer, that I bought a long time ago.  I roll up quarters and nickels and pennies and dimes as they accumulate, and then take them to the bank - perhaps twice a year or so.  Since we use a debit card, we don't have much change anymore.

Money is important in your life - not as something to chase after for its own sake - for the love of money is the root of all evil.  But it is important in that if you are lackadaisical with money, you can end up in virtual slavery as a perpetual debtor, spender, and employee - never able to call your own shots in life and decide for yourself what it is you want to do in life.

Throwing change in drawers, jars, and other places is disrespectful of money.  Thinking that a few dollars is "not a lot of money" is, as we've discovered here, a bad way of thinking.  Treating money with respect - as you would a loaded handgun - is the first step toward financial independence and freedom.

So cash in that penny jar (but don't pay 5% to do so!) and put the money into an investment vehicle - pay down debt, buy stock, buy a CD - whatever.  But don't just let money sit.  Treat it with respect.
Newer Post Older Post Home