The Myth of "The Little Man" 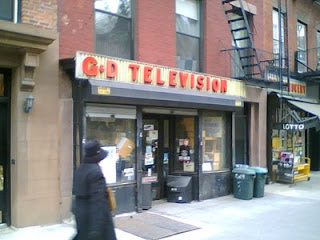 Small shops like this are dying out fast.  Is this a good thing, a bad thing, or a value-neutral thing?  Before you get all weepy about the fate of the small businessman, think about the reality of these types of stores and businesses, not the nostalgic fantasy.

Many folks decry the loss of the small retail businessman in favor of the big box stores we have today.  I received a poorly written comment from one fellow, who said something along the lines of, "You'll be sorry when all the independent retailers are gone and all that is left is big-box stores and warehouse stores!"

Really?  Well, first of all, too late.  It basically has already happened.  And second of all, Thank God, it's about time.

Before you get all weepy about the little guy who used to sell Televisions in his shop near the courthouse, get a cold water slap of reality into your system and remember how much he used to charge for televisions.  A crappy 27" RCA ColorTrak was over $500 back in 1970.  Today, you can get a 42" flat screen at the wholesale warehouse for $50 less than that.

And old Earl wasn't always the nicest guy.  He might give a good deal to his friends, of course, but to you, well, he socked you with full retail price.  Whaddya gonna do about it?  And of course, the black customers had to come in the back way, and they got socked with full price AND hefty financing fees.  Yea, Earl was a Good 'ol Boy all right, right down to the white sheets and Klan Hood he kept in his closet at home.

The warehouse store, on the other hand, sells the TeeVees to anyone who comes in - and all at the same price, regardless of race, color, ethnicity, or Klan affiliation.  You don't need to be a "friend of the manager" or "know a guy who knows a guy" to get a good deal - everyone gets a good deal.  This is more democratic.

And since prices are so low, you really don't worry much about having Earl "repair" your TeeVee.  It ain't repairable, anyway.  This sounds like a horrible thing, until you realize how much more reliable televisions are today, compared to 10, 20, and 30 years ago.  No thanks, I don't want to go back in time to the "good old days".

Yes, there are of course downsides to this new economy.  The tiny shops around the old courthouse are boarded up and no one goes downtown anymore.  The new Wal-Mart at the edge of town is ugly and nasty.  The big-box stores, with their huge parking lots, are an eyesore.

But if you look at the local politics of most small towns, you'll understand why this happened.  In your typical small town, one or two landlords own most of the commercial space - and often they charge ridiculous rents, thinking they are sitting on a gold mine.  And even if they are willing to sell, they want a pile of money for their worn-out old buildings.

With the advent of car culture, they shout down any proposal to install a parking lot downtown - the only lifeline that might save a dying small-town culture.  No, no, they say, we aren't paying more in taxes!

So people drive out to the big box store because they can park easily, the prices are lower, and they don't have to deal with Earl, who was basically a misanthrope who had a monopoly practice in a small town.

So, for example, a friend of mine who ran a stereo store quickly realized that selling low-end stereos head-to-head with the big-box stores was going to be a non-starter.  But there were people willing to pay big money for custom installations and home theater setups - services that most big-box stores didn't offer at the time (but are getting into, slowly).  Selling more esoteric and specialty items was the key.

When I was a kid growing up there were two stereo stores in our town, both out on the "strip" (Erie Boulevard) and both populated by salesmen on commission.   Their goal was to sell you the least amount of equipment for the most amount of money, preferably by getting you to sign odious loan documents.  Borrowing money to buy a stereo - go figure.

But at the time, they succeeded.  Why not? They were the only game in town.  And they ran a "repair" business back then, that sent out all the units brought in, for a flat fee of $75, just for a diagnosis.  When I later worked at United Parcel, I was chagrined to discover that an entire package car (truck) was parked at that stereo shop every day, taking in broken equipment and bringing back repaired equipment.  They ran a "repair" shop, but did no actual repairs.

30 years later, I drive by the burnt-out shell of that stereo store - gone and dead and replaced by the big-box stores, who can sell you a whole surround-sound home theater in a box (HTIB) for less than their $75 "diagnostic" fee to repair an old receiver.  Do I miss their smarmy salesmen, trying to sell me a 15-amp receiver for $250?  Not really.    I'll take better products and lower prices any day - without all the fuss and confusion of salesmen trying to take a simple deal and make it more expensive and complex.

We tend to wax nostalgic about the "good old days" - but nostalgia is suspect and people are selective about their memories. Yes, there were some small merchants in our small towns who were decent people and gave honest service.  But there were others who were worse than used car salesmen - and no one waxes nostalgic about used car salesmen, do they?

Moreover, no business has a "right to exist" in the face of competition and new technologies.  Small electronics are cheap and made in mass quantities today.   You can't "go back" to the system of small shops selling electronics by the eaches.  Or, let me put it this way, you go right ahead.  I prefer to pay half-price at the wholesale store - as most people do.

Living in the past is never a good idea.   Pining for the good old days of sitting on the courthouse steps and sipping lemonade neglects to take into account that the "good old days" were anything but good for a whole lot of people.  The same "good old boy" system that worked so well back then to keep small businesses afloat in small towns (and keep competing businesses out) also was the same "good old boy" system that was rife with corruption and racism.  Be careful of what you wish for, nostalgia is a very dangerous thing!

I think a far better approach is to move on, and instead of decrying the "big box" stores for ruining our lives, figure out a way to re-make and re-use these historic downtown neighborhoods.  Create some off-street parking, and make rents reasonable, and businesses will come.  But it takes some effort and time though - and not weak thinking that we can just "go back to the way it was".

People are weak thinkers, though.  They prefer to feel sorry for themselves and blame others for their woes, rather than look inside and see what they could have done differently to make things work for themselves.   It is easier to sit at home and be bitter and bitch about Wal-Mart than to take action and reformulate your business in view of new competition.  We like to feel sorry for ourselves - it feels so good!

Unfortunately, what kills off many of these small towns is poverty of the spirit.  For example, our small town of Brunswick, Georgia, has tried to remake its downtown into a collections of shops and cafes.  It could work, but the City and County seem determined to make it not work.  Rather than try to help the small businesses, the local government hounds cafe owners over liquor license requirements.  Most businesses close their doors early, and most are closed entirely on Saturday night and Sunday!

And parking?  Uh, no.  In fact, many business don't even have space for a dumpster - and they have to put them out on the street.  One whole block of buildings actually fell down and sits vacant.  Make a parking lot out of it?  Uh, no.  No doubt the owner wants a million dollars for the parcel.

So, not surprisingly, people go off to the strip malls out of town or to the tony restaurants on St. Simons, if they want a decent meal and a drink.  And even the local merchants work against one another - convinced that if they can just drive their competitors out of business, they will have a larger slice of a shrinking pie.  The idea that if they banded together, they might create a dining destination is of course, alien to them.  If they had more restaurants they ironically would have more business.  But on any given night, you feel like Omega man downtown, if anything is even open.

And you know what?  I don't feel sorry for these "little men" at all.  They are shooting themselves in the foot, and it is their own damn fault.  These are the same idiots who keep voting to ban liquor sales on Sunday - convinced that society will spin out of control if you opened a bar downtown (liquor can only be served in restaurants, welcome to the South.  Bring your Klan hood!).

So, we should wax nostalgic about "good old days" in downtown Brunswick, when they had a "Colored Entrance" the balcony in the local theater?  We should feel sorry for idiotic local merchants and government officials who fight amongst themselves, want to keep outsiders out, and pander to a Baptist minority?

I think not.  Let these "little men" stew in their own juices.  They deserve all the bad shit that is happening to them.  It is incumbent on them to realize the error of their ways and turn things around.  I do not feel obligated to patronize a dead/dying business on the grounds that "it is helping the little man".

It is like these boobs who say we should all buy American cars (I did - that Vega was great!).  Sorry, but you can't run a business on the premise that the customers should feel sorry for you.