You may have some misconceptions about this blog.... 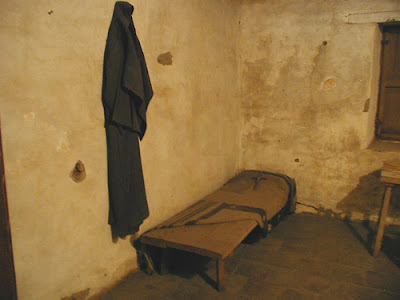 Recently, I received some comments which indicate to me that some people don't understand the point of this blog.  I did not write this blog to figure out how to live like a Monk on bread and water, but how to live better, on less.

If you are looking for instructions on how to knit a sweater from old pocket lint, try Hints from Heloise, as I think she covered the waterfront on that.

Most people, of course, do the opposite, spending hundreds of dollars a year on bottled water, and instead drinking champagne only on New Year's eve or at a wedding.  Frankly, I think this is a foolish waste of money.  American tap water is far superior to most bottled water, and the savings in not buying a 99-cent of bottled water at the gas station, every day, is enough to buy you a bottle of Cristallino Cava every week for the rest of your life.

THAT is what this blog is all about - making smart choices so you don't have to do without, but can do WITH, simply by making different choices than the great unwashed ignorant masses.

For example, a lot of people think you have to be "rich" to buy a Mercedes.  Yes, you could do it that way, leasing a car, handing over your checkbook and your life's savings to a salesman, and giving him your blubbering thanks as he "lets you" lease a new car.  That, of course, takes no talent, skill, thought, or anything, other than an idiotic willingness to go into debt and squander the limited income you will learn in life.

On the other hand, if you are smart, perceptive, skilled, and willing to learn - and not living in an irrational FEAR all the time of an "expensive repair", then you can own a really nice car for not a lot of money - a secondhand Mercedes or BMW, for less than half the retail price, which will give you many years of reliable service.

It is a choice - bottled water or champagne.  Scrimp where it isn't important, so you can spend where it is (to you).

This is not to say you should buy a BMW.  YOU probably shouldn't.  If you are not astute about cars, you'd end up buying a "fright pig" that would suck your bank account dry, and leave you decrying BMWs as "expensive to repair" - when in fact the error lay in your purchase, not in the car.  No, no, for you, Mr. and Mrs. Average American Schmuck, who can't change a light bulb without cross-threading it half the time, stick to a nice Toyota.  Seriously.  (and they are not bad cars, either!)

But if you are willing to learn about things, you can do so much more.  So few people want to learn, though, and court ignorance as if it were a virtue.  To actually know how to fix a computer, or a car, is seen as plebeian labor.  And of course, you are above all of that, right?  A few nights a week spent at an adult education class in car repair could pay off for a lifetime.

Simple things, like understanding what the check engine light really means, can save you thousands of dollars, over the years.  Electronic fuel injection has more to do with your home computer than a car, and it is not hard to figure out.   In fact, while tuning a multiple carburetor setup takes real skill and talent, repairing a malfunctioning fuel injection system takes only knowledge -  knowledge that anyone can acquire.  This is good news.

But heck, most people buy a brand-new car and then park it outside, leaving their garage for their collection of crap they bought at a big-box store but never got around to using.  And they wonder, after five years, why the paint looks like crap, the glass is etched with water spots, and there is a funky damp smell in the car.  All it takes is simple knowledge - the knowledge to park the expensive asset in the garage and throw the craploa away (or not buy it in the first place).

So, you'll have to pardon me if I seem condescending to people who are willfully ignorant.  Ignorance is not bliss - nor is it a badge of honor.  Sorry, but no sale, no sympathy, for weak thinking and self-pity.

And speaking of which, this is the Living Stingy blog, not the "live fast, die young, buy a lot of bling crap" blog.  Go sell crazy somewhere else, please!

A young man recently tried to convince me that bling rims were not such a bad idea - if you had joined a drug gang at age 15 and didn't expect to live to 25.  Sorry, but that is just insane thinking.  The idea that you should buy a lot of flashy crap to "enjoy it" because you are going to die anyway is idiotic.  First of all, there is little "enjoyment" in owning bling rims, unless you really enjoy looking like a fool.  Yes, we are all laughing at you when you drive down the road with these gaudy monstrosities on your clapped-out $500 Caprice.  The only idiots who think that is cool is your idiotic peer group.  Find new friends - seriously.

Second, the odds are not that you are going to die in a drug-related shootout at age 25, but that you will outlive your money - while first going bankrupt due to debt, sometime in your 30's.   So while it may sound romantic and all to live the life of a Gangsta', it really is immature thinking at its worst.  And you have a choice in life on how you want to live.  So just eschew that sort of nonsense.

We here in America are very, very lucky, in that we have a lifestyle that most of the rest of the world cannot even dream about.  But sadly, most people squander their life here in America, by letting the siren song of DEBT suck up their cash and leave them with little more than trinkets and perpetual debt.

You can live a very rich life in the USA, on not a lot of money.  This doesn't mean living like a monk - but rather, making smart choices with your money and your life.

And you always have choices - even when you think you don't have choices.  And those choices you make are the most important determinant of how your life plays out.