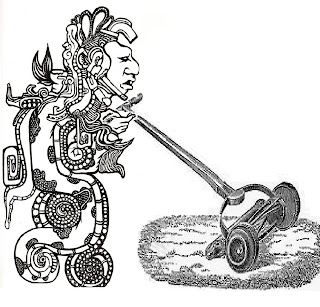 The ancient Mayans had incredible lawns, according to archeologists.  Apparently this is why Guatemalans today often work in the lawn service industry.

"History is Bunk" Henry Ford is purported to have said.  I don't think he meant that real History itself was bunk, but rather how we interpret history and present it.  Oftentimes, our view of the past is filtered by the present.  And oftentimes we present an image of the past that is more speculation than reality.

I was struck by this recently while reading a Smithsonian article about the lost city of El Mirador (which of course, was not the Mayan name for it).  It was accompanied by this illustratration: 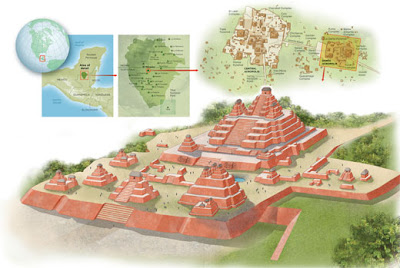 Wow, who does their lawn work?
All I could think of was, "Gee, those Mayans had nice lawns!"  I mean, look at the image above - the lawns look like putting greens.   Perhaps the Mayans were into lawn bowling?  And most "restored" Mayan cities are maintained this way - with expansive lawns.

Perhaps that is not how the "City" looked during its heyday, but perhaps it was more along the lines of beaten down earthen mud, plants, trees, or jungle.  Who knows?  I am not sure how the artist who came up with the drawing above decided on lawn.  Poetic license, perhaps.

What is the harm in this?  Well, it romanticizes the past, and makes their "Cities" look clean, neat, orderly, and civilized.  Never mind that they practiced human sacrifice or whatever.  It presents a distorted picture of the past.  And in this instance, the goal is to romanticize the past, and make this "lost civilization" appear to be more than perhaps it was.

In a similar manner, we sometimes run down our own civilization with historical rewriting of how things were back in the day.  In school, we were always told that our ancient forbears were pretty gross.  The Romans ate so much they threw up (not true, vomitorium is a Latin word for "exit" - not a room for puking in).  We are told that our European Ancestors and even Colonial forebears stank to high heaven.  Also not true.

I was treated to this latter lie while at Mt. Vernon, George Washington's home which was down the street from us.  While in Washington's bedroom, the docent started to regale us about our stinky ancestors - how they never bathed and how they were dirty all the time.

I asked the docent what the water pitcher and bowl on the sideboard were for.  "Well, uh, every morning a slave would bring in a pitcher of hot water and clean wash clothes for the Washingtons..."

"To wash up with, right?" I interjected.

"So it isn't really true that they stank and never bathed, is it?" I pointed out.

"Well, they didn't take baths or showers!" she said.

But that misses the point.  Our ancestors were as clean as we are today, they just cleaned themselves differently than the baths and showers of today.  And back in an era where an ear infection was a death sentence (no antibiotics being available), the idea of immersing yourself in water was not a good idea.  But a washcloth and hot water was.

Down the road at Gunston Hall, the home of George Mason, the author of the Virginia Declaration of Rights and the architect of our Bill of Rights, I was regaled with more stories about "our stinky ancestors".

The docent there gleefully showed us a chair with a flip-up seat.  A chamber pot could be put under the seat, and the padded lid lifted up to make an indoor privy.  The chair was set at the dining room table, and our docent told us, with a straight face, that George Mason was prone to taking a stinking dump at the dinner table, in the middle of dinner parties.

I had to call them out on this.  Yes, the chair was made for the purpose stated.  But no, I doubt it was set at the dinner table and diners would take turns shitting in it during meals.  I suspect it was used in upstairs rooms, where most chamber pot business occurred.  Someone modern person moved it to the dining room and concocted this outrageous story.

And why do I know this?  Because in the 250 years since George Mason shat in that chair, we as human beings haven't changed that much.  No one would enjoy eating dinner while their neighbor is wiping his ass.  It is just common sense.  Our ancestors may have done some dumb things, like keeping slaves.  But shitting at dinner wasn't one of them.

So why do people do this - create history from whole cloth?  In a way, we can laugh at our ancestors and their accomplishments, and perhaps convince ourselves that we are somehow better or different.  We would never keep slaves - no sir!  But those people from 1770, they were different that you and I  - they stank, they shat, and they kept slaves.  And we are certainly not like that, right?

And we desperately want to think of ourselves as modern, sophisticated, and advanced - every generation does, of course.  So we say, "Well, the Germans may have embraced Nazism, but that could never happen today - not here - because we're not like that!"    But we are like that.

The chant of "Never Again!" however, has been more like "Again?  Enough Already!" in the years since WWII as genocide is repeated again and again, all across the globe.  We are like our ancestors, in ways we don't want to believe.

We want to believe that the racism and intolerance of our fairly recent past could never recur.  After all, those people back in the 1940's and 1950's were little more than primitives, right?  Wrong.  They viewed themselves as modern and sophisticated, just as we do today.   And we could end up just like them, in a heartbeat.

History is Bunk  - when it is filtered through the prism of today, and we fabricate the details of history from whole cloth.
Newer Post Older Post Home