Why I Hate Young People 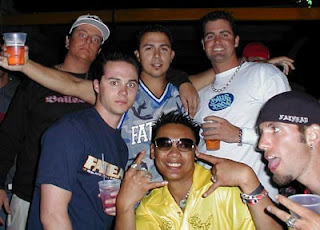 Were we ever this stupid?  The sad answer is, of course, yes. We were.


I suppose after posting why I Hate Old People, I should give equal time to the younger generation, who of course, are a bunch of blithering idiots, as viewed from the safe comfort of middle age.  And it has always been so, and will always be so.  And yes, we were all that way, once.

Young people can be very annoying, and everyone knows this - even children.  You see some kid with tattoos and piercings all over, wearing the oddest clothes and they say, "What are you looking at?  I'm just trying to be different!"  But of course, they are "different" like the millions of other kids their age - and oblivious to the fact that you can't be different and a conformist at the same time.  They are dumb as stones.

Their music is loud and annoying and sounds like cars crashing.  Their clothes are ugly and impractical.   Their hair is nasty and dyed in odd colors.  They drive annoyingly loud cars and drive them badly.  They can barely speak English and communicate in passive-aggressive ambiguity or slang.  And assuming you can get one to go to work, they will call in sick, late, hung over, or just drugged out.  And they steal all your shit when you aren't looking.  And then they look at you like you're the freak.  Young people - what's not to like?  Young people suck, when you think about it.  And not in the good way.

Oh, and like Old People, they smell funny.  Yeech!

Every generation has its own form of idiocy - its own idiotic lingo, styles, trends, music, and whatnot.  And we all like to think we are oh-so-clever with it all.  23-Skiddo!  Far out, man.  Whatever.

Most of it, of course, is posturing - wearing clothing styles, modifying cars, listening to music - all designed to annoy our parents or perhaps alarm them.  And whatever style or fashion is chosen, the common denominator is loud, ugly, and silly.  It matters not whether it is a Zoot Suit, a ducktail haircut, the leisure suit, or wearing your pants so low that your underwear shows - it looks dorky and later on in life we shudder at our sartorial choices - and how much we spent to look like circus clowns.

Of course, the other common denominator is spending.  Kids like to spend money on crap.  And we adults have harvested them like Soylent Green in this regard - offering them the crap they want to buy and making a pile of dough in the process.  For the adult, this is the one good thing to like about young people - their idiocy makes them excellent consumers and easy pickin's for the car dealer, the consumer credit company, and the credit card purveyor.

And of course, bars and restaurateurs rely on young people - particularly in certain districts - to fill their coffers by paying idiotic things like "cover charges" and $8 for a draft light beer.  Adults rarely fall for this sort of foolishness - or don't do so often - as they have learned the sad lessons in life that you have only a finite amount of money, and no, a singles bar (or any bar, for that matter) is really not all that interesting, once you've done it more than a few times.

And the sad thing today is that young people are allowed to go into debt - deep into debt - at an early age, to pay for toys and drinks and clothes, which will require the rest of their working lives to pay off.  When I was in college, student loans were hard to get - and if we got them, they were payable to the registrar, not to our bank accounts.  Credit cards for 18-year-olds simply didn't exist, as Banks had this weird idea that we might not be able to pay it all back (and failed to realize there was more money to be made in ruining a person, financially, than in having them pay back their loans on time).

So kids today are as dumb as we were back in the day, but today they have a far more lethal arsenal of drugs, financial instruments, and even weapons, to harm themselves with.  It is far more easy to get heavily in debt before age 25 today than it was back in 1980, when I was a clueless "Dude".  I may have squandered money, but I only squandered what I had - I didn't borrow that much more (although I did borrow some!).

So, as one reader noted, 20-something kids will cash in their student loan money for one night of lap dances, marijuana, and cold beer, not realizing that those student loans will take 30 onerous years to pay off - and the likelihood of them ever being paid off diminishes with each lap dance, beer, and joint.

Youth fails to realize that the one strategic weapon in their arsenal - a weapon more powerful than any of their elders possess, is time and the magic of compound interest.

On the other hand, if you keep using Student Loan money and rack up debt like that, it will takes years to pay off - and for every dollar spent, you will pay back an additional dollar in interest.  This makes the $8 beers cost $16, which is kind of pricey, given you can buy a twelve-pack of really nice beer for that amount.  And I am not sure why a 20-something needs to pay a stripper for fun, when there are plenty of college co-eds who will do far more than a stripper will, for free, in your dorm room, without your buddies present.  Why pay for a cow when milk is free?  Perhaps they are ugly boys and can't get dates, or prefer the subliminal homo-eroticism going with their buddies to the strip club.

Once in a while, however, you do meet a young person who "gets it" and does so at an early age - just as once in a while you meet smart older people who don't let their lives devolve into a soap opera or high school.  Once in a while you meet a kid with his head in the right place, who "does the math" on money and realizes that most of his friends are idiots for squandering what little they have - and chooses to save and invest instead - and live on less.

I have to say in my own life, I did both - but far too much of the former and too little of the latter.  I listened to friends and peers when it came to spending, and assumed they were "right" that going to bars, buying beer and pot, and doing stupid things like gambling and wasting money on cars was the right thing to do.  And I borrowed money when I was young to buy things I really had no need for, ever.  Things that today I do not own, and in retrospect, were part of my life for a very narrow period of time - but seemed so important to have at the time.

But I walked away from those peers and re-imagined my life and started saving and working.  It did not turn things around right away, of  course.  I still spent more than I should have, on things of dubious merit.  I overpaid for other things or neglected ways to have more while spending less.

And perhaps this is the path we all follow - finding our way through life.  When we are young, we are restless and want as many great things in life as we can get - all the stuff our parents said we couldn't have or was too expensive.  And when you leave home, there are so many tempting pleasures to explore - sex, drugs, booze, music, cars, parties - you-name-it - that we feel it is worth going into debt to obtain.

(And oddly enough, young people, while talking about sex and thinking about sex most of the time, have far less than you'd imagine.  Young people have more sexual hangups than older people, as they are still struggling to deal with their sexual issues.  Older people just give up and go with the flow).

But like so much else in life, we expect so much of young people and put so many burdens on their shoulders.  They are expected to discover themselves and find their place in the world, go to school, find a career, and settle down in life - and these are hard things to do.  We expect them to fight our wars (older people wisely staying home and out of the way, although this is changing as we see adult warriors in Iraq and Afghanistan).  And we expect them to make financially astute decisions at a time in their lives where temptation is very strong and self-control is very, very weak.

So it will not likely change anytime soon, and young people will be annoying and smell funny for generations into the future.  And they will squander money and go heavily into debt today, which will create a permanent debtor underclass in the future.

As adults, perhaps, we have a duty to protect the young by preventing banks and other financial institutions from taking advantage of the young.  At one time in this country, money was only lent on the premise that the person borrowing it could pay it back.  Today, this is not the case, and banks loan money to the young (and poor, and minorities) knowing full well that bankruptcy will be the end game for the borrower.

Like I said, you can make more money from ruining someone than you can from a good customer who pays you back....