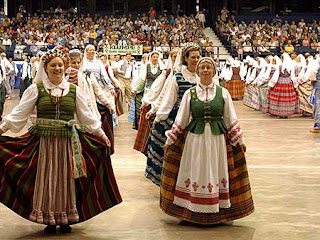 Ah, the local natives in their colorful costumes, performing their traditional folk dances!  Why would anyone in the 21st Century want to do this?


Culture can be a trap, particularly for Americans.  And yet, to suggest to anyone that their "Culture" - any culture, is basically a bunch of hooey, like Genealogy, is to come under attack for being culturally insensitive (the new hate crime of the 2000's) or worse yet, some sort of racist.

Culture is a fine thing and all, but to live in the past and be locked into the past can be a trap.  And let's face it, those "native costumes" of our European Ancestors, well, they were ugly as sin, weren't they?  Not to mention uncomfortable and hot and stuffy.

And so much of Culture is suspect, anyway.  Much of it is made-up, fabricated, modified, sanitized, or otherwise a distorted vision of what happened in the past.  During cultural celebrations, we put on elaborate get-ups that were not likely worn very often - if ever - by our ancestors.  Go to any St. Patrick's day celebration, and everyone dressed up as a leprechaun.  And yet, the potato farmers of the 1800's hardly dressed that way, did they?

Culture can be manipulated to serve the ends of the living.  For example, my ancestors posited themselves as Scottish, which opened doors for them in the New World.  The truth was, of course, they were Irish, and at the time, discrimination against the Irish (and Catholics) was rampant.  So my ancestors tried to "pass" as Scottish, and it worked.

My present-day relatives dress themselves up in tartan kilts and affect bad Scottish brogues at family reunions and celebrate an ancestry that is, well, made up.  And moreover, an ancestry that really is irrelevant.  Who you are today is not a function of who your relatives were, 10 generations ago.  And in fact, searching for identity in well-worn old tintypes is little more than a Rorschach test - you will see what you want to see, as my relatives do - looking into a sea of Kelly Green and seeing Plaid.

And no, I am not afraid that our "Cultural Values" will be lost forever if we don't honor them.  Regardless of our mixed ancestry, I am fully confident that the Irish and Scottish (in Ireland and Scotland) will keep the native traditions alive.  In fact, that is part of the problem in the UK, which increasingly is less and less United and hardly a Kingdom.  The various regions of the country, none larger than New Jersey, are devolving into separate City-States, complete with their own languages and customs - often revived from years past.

And much of what we call "Culture" is made up these days.  Kwanzaa, for example, is a made-up holiday, a sort of Black Christmas, which was created in 1966 - not handed down through generations of African-Americans.  I am not dissing Kwanzaa, just pointing out the truth of the matter.

And yet, like with religions, we are expected to "respect" each others "Cultural Values" in hushed tones, much as we talk with reverence about the deep faith of Muslims.  Nothing is open for criticism here, debate, or even discussion.  It is a topic that is off-limits, taboo, and not to be discussed.

And when you rope off areas of our society as "we don't talk about that" - such as culture or religion - well, bad things happen, as no one criticizes or calls into question some cultural practices.

And culture morphs over time and often is in fact, quite contemporary.  Much of "Black Culture" of today was in fact manufactured within the last 20-30 years.  So-called Gay Culture is along the same lines - a bunch of made-up memes and themes that are agreed upon without discussion.

For the individual, Culture can be a trap.  If you allow your "Culture" to dictate to you your normative cues, you may end up doing things against your own self-interest.  In the black "community" (community is a word I distrust, as it is used often by politicians to describe social groups that may not in fact be interconnected) for example, there are those who argue that acting like a "gangsta" is part of the culture - a value that has to be respected and accepted without question.  Or that slang language (Ebonics) is in fact, cultural, and must not be "disrespected" [sic].   Latinos are finding similar poor cultural norms thrust upon them, as street gang culture swallows up an entire generation of young men.

However, such Cultural "norms" end up as a trap for young men, making them virtually unemployable,  and sentencing them to a life of penury and deprivation.  Escaping such cultural values is essential to your own personal survival.

Or take so-called "Gay Culture".  There are magazines out there which suggest that heavy drug use (Methamphetamine, Crack) are societal norms, as is heavy partying, unprotected sex, and a whole host of unproductive values are are personally harmful.  Or even if you don't do drugs, you are expected to dress up in leather, or in a dress and high heels - which is fine if you like that sort of thing.  But few actually do.

Many Native Americans stay on the reservation, convinced that honoring their "culture" is essential to their survival.  But on a personal level, economic opportunities are greater off the reservation than on.  The only exception is when a Casino opens up, at which point people clamor to re-join the tribe, hoping from some of that Casino booty (and as I noted before, the people running the Casinos have strikingly non-Native American names!).

Many people I run into feel constrained by tradition and culture to do things which make them very unhappy.  They feel that they need to take the career path their parents have chosen for them, or that is traditional to their culture.  They feel they have to marry "one of their own kind" or a spouse chosen by their own people - such as my Indian friend who abandoned her career as a chemist to marry a man chosen for her by her parents at age 7.  Was that a good move?  I only hope it worked out.  These can be good personal choices for some people - but not for all.

Culture is a fine and wonderful thing, but often it is twisted to ends of the living, not the dead.  And often our view of culture is refocused through the prism of time.  Even today, many Italian Americans celebrate Columbus Day as a cultural value, even though Columbus was exploring in the name of the Spanish government.  And while in grade school we learned that "In 1492, Columbus Sailed the Ocean Blue", we learn today that in fact he was on a mission of conquest and genocide, and that entire tribes of natives were brutally worked to death in his search for gold, pearls, and other riches of the "Indies".

The reality of that "Culture" and the mythology are two entirely different things.  We hardly want to celebrate brutality and murder - and no one is suggesting that Italians are doing so by celebrating Columbus Day.  But the Cultural values of the celebration are a modern invention, not an historic one.

Culture can also serve to divide and isolate people from one another.  If you are so closely tied into your Culture that you have to wear funny clothes, live in a separate neighborhood, shop in special stores, and socialize only with special people, then your world view becomes skewed.  You live apart from general society instead as an integral part of it.

In the South, many are trying to revive a mythical culture of the Rebel Hero - arguing that many racist emblems and symbols of the Civil War, Slavery, and the Klan, are in fact the "Heritage" of their ancestors (and indeed, my ancestors, too).  But this new Rebel Revival often involves a re-invention of history and a recasting of historical events.  It is less "heritage" than a cover for racism.

And why should it matter to me, as an adult in the year 2011, that My Great-Great-Great Grandfather Robert Thompson (after who I was named) owned slaves and was a Colonel in the Civil War?  I feel no compelling urge to fly a rebel flag or wear a uniform.  Whatever he was, he was not me, and I feel no need to pay "honor" to him or to be locked into some sort of ersatz Southern Culture.  Should I be wearing white suits, sitting on the veranda and sipping mint juleps?  I need instruction here.    Or should I be dressed as a leprechaun to honor the other side of my family?  Or a kilt, which could double as a dress?  Either way, it makes little sense to me.  I am not those people, and they have no influence in my life - and I do not wish them to.

And unfortunately, there are many, particularly on the Left, who have taken Culture way to far.  We are told that we all should retreat into our own Cultural Ghettos, and that we have to "respect" each other's Culture, regardless of how ridiculous it is, or even if the other fellow's Culture is predicated on the wiping out of everyone else.  It is taking Culture far too seriously, I think.   It is not necessary for all of us to wear funny costumes and be "cultural".  Some of us can just be regular people, right?

They want to divide us up into the aforementioned "Communities" and then play us off against one another - so we don't see that their real game is - divide an conquer.  If you can pigeon-hole people into Cultural slots, you can pander to them and get elected to office.

Yes, it is fun to put on the traditional costumes once in a while for a special Cultural event, and re-enact certain rituals.  But when you take it too far - and turn your entire life into a Cultural event and view everything in your life in terms of your Culture or Religion, then Culture takes on a more menacing and yes, evil influence.

I do not feel any aching need to identify myself with any one Culture.  I am a Human Being, Citizen of Planet Earth.  Diving things further than that seems foolish to me.

The good thing about Culture is that is indeed remarkably elastic and able to be modified, modernized, and revised, over time.  And much of what you may think of as ancient and traditional Culture is often a fairly modern fabrication, assembly or modification of older Cultures.  So you can, in effect, create your own culture or modify your culture to suit your own needs.

You not locked-in to living your ancestor's lives.  You do not have to participate in a Culture that is not to your liking.  Culture can be a trap for some people, if they sacrifice their lives on the altar of Culture at the expense of their own well-being.
Newer Post Older Post Home