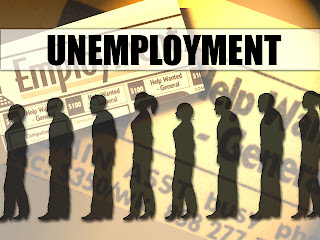 If you pay people a base salary not to work, it is axiomatic that they will not take a job that pays that same base salary - and you can't blame them for that!

People are remaining on unemployment for as long as 73 weeks, thanks to extensions passed by Congress.  But these extensions are slated to end, shortly.  Do extended unemployment benefits act as a deterrent to work?  I think so.

I have never collected unemployment benefits in my life.  No welfare, no food stamps, nothing.  So the entire concept of being paid to not work is alien to me.  Whenever I needed money, I went out and got a job - whether it was delivering pizzas or humping boxes at UPS or whatever.  Even in the "great recession" of 1979, I had a job.

Now, granted, a lot of those jobs didn't pay very well.  But they were not hard to get.  I just had to show up on time and work hard - two things that most employees don't do, even in this day and age.

And as a self-employed person, I will never qualify for unemployment benefits.  So pardon me if I have little sympathy for the sob stories in the press about people who get steady paychecks every week (Sweet!) and then squander it all on a Jet Skis and Cable TeeVee (Stupid!) and then get laid off and are broke (Ouch!).

According to this MSN Money article, an average unemployment check can be as much as $330 a week, which works out to about $8.25 an hour, or about $17,000 a year.  This is not chump change, although hardly enough to support the mythical "Family of Four" that is bandied about by Liberals all the time.

However, for a single person, it can be quite a lot of money - provided they don't have staggering credit card debt, car loan debt, and a huge mortgage or rent payments.

For an unemployed person, the mathematics are pretty simple.  If you are making $8.25 to sit on the couch and watch "Oprah" (OK, so I am out of date - the "View" or whatever) then there is little incentive to go out and take a job paying, say, $8 an hour.  IN fact, three is NO INCENTIVE whatsoever.

And in fact, in some States, unemployment benefits may not be taxable, so that $8 an hour could effectively be $9 or $10 an hour.  Not bad money to do nothing.

(By the way, Mark makes a whopping $8 an hour working at the lighthouse gift shop.  When I told him the story of the wining stewardess making $8.25 on unemployment, he was nonplussed).

But of course, if you were making $50,000 a year or $100,000 a year, it will be hard to get by on $17,000 a year.  But this illustrates exactly why, if you are a "salary slave" you should not look at your paycheck as some pie to be divided up amongst your lenders and expenses.  Saving money - building wealth - is essential to your long-term retirement plans and also to your survival.  And having a low overhead makes your life more flexible so that you don't end up sucking air when the money train stops but the bills keep coming in.

But some unemployed persons live comfortably on their 401(k) savings and Credit Cards as well - which is a very dangerous game, as it squanders net worth rather quickly and builds up debt.  They forgo making cuts to their lifestyle in favor of living for today.   When the money runs out, the credit card is maxed out, and the unemployment benefits dry up, they end up taking that lower-paying job, but now are financially destitute.

As I have noted in the past, it is not an aberration that people get laid off at age 55 and never find that high-paying job again.  Rather, it is a predictable outcome.  And in the go-go economy of the 1990's and 2000's, a lot of people were dramatically overpaid to do very simple work - and expected that such jobs would be available ad infinitum.

But then the economy rationalizes, and suddenly, the idea of paying an overblown office clerk $100,000 makes no sense.  And yes, that goes for airline stewardesses, too.  Please, don't give me that "we're safety experts and not just cocktail waitresses" line.  Yea, it may be a hard job and all, but it doesn't require six years of college.  In fact, it doesn't require even one.

So, if you are being wildly overpaid for basically low-skill or unskilled work (and let's not kid ourselves here that we are geniuses) then it only makes sense to save money, put it aside and expect to be laid off in the future - and have a second career making far less.  It is a very typical pattern, not an atypical one.

And, unfortunately, unemployment benefits serve only to keep people off the workforce for longer periods of time.  So long as a person can survive on unemployment, they have less incentive to explore alternative careers or lower-paying jobs.

And I say this having seen it firsthand - friends who are laid off as a "Human Resources Manager" making $100,000 a year to push bits of paper around and explain the 401(k) and health benefits to employees.  They are laid off and replaced with a web page.  And they sit at home and pout and refuse to accept than no company today can afford to pay office drones six figures anymore - and that perhaps their time would be better spend figuring out how to best work in these new conditions.

So they burn through savings, they cash in their 401(k), they run up credit card debt - and the don't cut their expenses at all.  And when they finally do take that "second career" job, they are far worse off than they could have been.

MY PREDICTION is that once extended unemployment benefits are cut, you will see the unemployment rate drop.  The same thing happened in the early 1980s, and it will happen again.   People will get off their high horses and "stoop" to accepting jobs that they previously turned their noses up at.

Yes, that sounds harsh, but that is the hard reality of it.
Newer Post Older Post Home