How Many Credit Cards Do You Need? 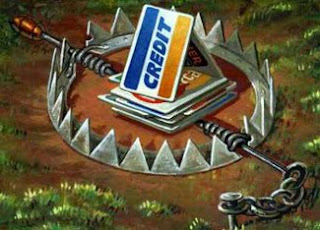 How Many Credit Cards Do You Need?  Do You Need Any?
When I was a kid, my Dad had a fat wallet full of credit cards.  Like George Costanza's wallet, it was nearly an inch-and-a-half thick.  He had gas station credit cards, store cards, credit cards - you name it.

Credit Cards back then were a recent invention.  Although gas station charge plates and primitive forms of Credit Cards existed as far back as the 1920's, it wasn't until 1950 that Diner's Club was founded and it wasn't really until the swinging '60's that American Express, BankAmericard (Visa) and Master Charge (MasterCard) really became ubiquitous.  And it would be another decade before nearly everyone in the country - even college kids - had credit cards.

So, while you youngsters might think we always had credit cards, the reality is, it is a very recent invention.  And the way we use credit cards today - to pay for meals at McDonald's and other trivial expenses - is far different than what was envisioned when they first started out.

And back then, the premise of the credit card was simple.  You didn't have to worry about paying cash or getting your wallet stolen with a lot of money in it.  And since you had 30 days to pay the balance, you could play the float for new purchases.  The credit history business was in its infancy and credit scores had yet to be invented.  So long as you paid your bills on time, you had "good credit" no matter how many cards you carried.

Today, many people still carry many cards.  The average American carries 3.5 and many retirees carry 5 or more.  We go into debt earlier in life, and stay in debt longer.  And today, Credit Cards are used for nearly every legal financial transaction - and quite a few illegal ones as well (escort services, online poker, etc.).

The question is, of course, why do people carry so many credit cards?  After all, they are all pretty much the same, in terms of interest rates, fees, and terms.  And if you are dumb enough to go after "frequent flyer miles" or "cash back bonuses",  wouldn't you just use the one card that give you these?

Granted, for people who have a business or have to charge business expenses (travel, for example) a separate card for those charges makes sense.  I keep one low-limit ($10,000) card for Patent Office Fees.  But whenever possible, I try to pay cash instead, through their online deposit account.  For personal use, I use a debit card.

Mark has a small limit credit card ($1500) for occasional restaurant meals and emergencies.  But again, we use a debit card most of the time for daily living expenses - it is just a lot easier to deal with and a lot less risky than Credit Cards, which can blossom into debt monsters.

So, it begs the question - why so many cards for so many people?  Bear in mind that the 3.5 and 5 numbers are averages which means some folks, like me, have one, and others have 5, 6, 7 or more.

Some folks keep different cards with different rewards.  "I get miles on this one" a friend says, "and this other one gives me money toward a new GM car!"  But as I have noted before, the actual benefit of these miles or cash back or GM bonus points can pale in comparison to the fees and interest you may incur if you have a balance on your card.

Another reason people carry multiple cards is that some cards are not universally accepted.  American Express and Discover, for example, are not taken in many places.  And if you have a Credit Card Merchant Account (which allows you to accept credit cards) you'll understand why.  There is a monthly fee to accept VISA and MASTERCARD and if you want to take Discover and Amex, well there are additional fees for each.  So most folks opt out of the latter, knowing full well that anyone with an Amex or Discover card has a VISA or MASTERCARD in their wallet also, "just in case".

But to me, it makes no sense to have a card that is not universally accepted and then have a second card that is, just in case the first one doesn't work out.  And the "Cash Back" rewards of Discover don't justify the high interest rates on the cards.

So.... how many Credit Cards do you NEED?  In my mind, zero is the best number - use cash or a debit card instead.  Even checks are easy to use today, thanks to Check 21 (they are scanned and your account debited, like a debit card).

Credit Cards can be handy, however, for renting cars.  The hold placed on a credit card is not the same as the cash hold placed on your checking account if you use a debit card.  Plus, many credit cards offer damage waiver protection for car rentals.  A credit card can be a good emergency loan instrument - provided it has a low interest rate - below 10%, which is possible if you eschew frequent flyer miles and other gimmicks.

Again, a Credit Card is a debt instrument and should be negotiated as such.  You don't pay 25% interest on a car loan, just because they give you a free flight to Duluth.  Well, who knows, some idiot would, no doubt.

There are Credit Cards out there with low interest rates - below 10%, some below 8%.  But the Credit Card industry is nervous and justifiably so.  Average debt load in America is dropping.  People are getting rid of debt and shopping rates more aggressively.  And new rules and regulations make the future of the business uncertain.  Most Credit Cards offered today are at a variable rate not a fixed rate.  And my old low, fixed-rate cards (such as my 5.7% Citibank Card) were simply not renewed when they expired.

For me, the answer is simple:  Keep one card with a low rate and a low credit limit - enough to use for emergencies and the occasional charges while traveling.  Avoid using it at all for regular purchases.

The trap of the credit card is one that most Americans fall into - the promise to pay off the balance every month (and they promise to lose weight and cut back on drinking, too!).  But that promise gets forgotten the first month they can't make the payment.  And pretty soon, it snowballs - it is inevitable once you cross that threshold or tipping point.  And like the payday loan victim, pretty soon you find yourself over your head in debt.  With credit cards, it just takes longer, is all.

Credit is a trap - you end up paying a sizable chunk of your real income in interest - and a huge portion of your disposable income in interest as well!  Avoiding debt and avoiding odious debt instruments like Credit Cards - particularly the high-interest rate "rewards" type - is the key to staying out of trouble.
Newer Post Older Post Home