Plains, Georgia - an Example of Poverty of the Spirit 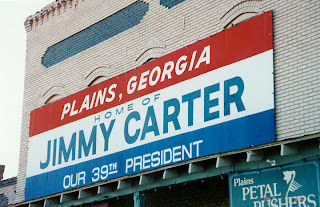 A trip to Plains, Georgia?  Don't bother.  Nothing there.
Plains, Georgia, the home of Jimmy Carter, suffers from Poverty of the Spirit.  If you are ever in the neighborhood, which is highly unlikely, because it really is in the middle of nowhere, don't bother stopping in.  There literally is nothing to do there.

Yes, there is a museum in Jimmy Carter's old High School, but the museum is more about the High School than Jimmy Carter.  And yes, Billy's gas station is intact, but forget about even buying a souvenir there, there is no gift shop.

And yes, the downtown of Plains, which is a set of store fronts on one side of the street, not even a block long, is still there.  But good luck even trying to spend money there.  The biggest selling item in the Souvenir shop are Sarah Palin 2012 buttons.  You want a retro "Carter-Mondale 78!" T-shirt?  Well, you're out of luck, as no one there thought that maybe people would buy something Carter-related.  I mean, why would you want to do that?

Of course, you can't even visit the President's house - he still lives in it.  You can drive by at 35 mph.  Don't slow down, or the Secret Service will start tailing you.  Not much to see here!

So, how about a drink?  After all, Billy Carter certainly was known to knock back a few, right?  Wrong.  Not a bar in sight.   A restaurant where you could get a glass of beer or wine?  Out of luck.  Closest you can get is Pat's Place back in Americus - 30 miles back thataway.

In fact, the only place to get a beer is in the antique shop, where they are selling 30-year-old stale cans of "Billy Beer" for $30 a can.  Yum!

And yes, most of the stores are for sale - business is that good.

Poverty of the Spirit - that is their problem.  They have a steady stream of tourists coming to town, and no one bothers to think, "Gee, if I were a tourist, what would I want to buy?"

Well, they think that, and their apparent answer is, "A lot of crapola."

Unfortunately, Plains is all-too-typical of many small towns in America.  We were in Maine once, and found this nice restaurant perched on a lookout on the side of a mountain, with a spectacular view of the valley below.  Wow!  What a great place for a cold glass of wine and a light meal, right?

Um, no.  Hot dogs and Coca-Cola and bags of chips.  That's what they served.  "Because that's what Americans like!"

You know, I can go to a food refilling station anywhere.  Food and drink is more than just 5 gallons of super-unleaded.  It is more than a mere source of fuel for your brain.  It is something to be enjoyed, savored, and cherished, preferably in a relaxing and beautiful setting.

But no.  To a lot of people, food is just something you shove in your pie-hole until you have to undo your belt a notch.  And a beautiful window with a view of the valley is a good place to put the Coke machine.  And I kid you not - I've seen this.  A winery in Upstate New York did this, stacking empty wine boxes in front of the picture window facing the lake.

People, it seems, just don't get it.

Went to a campground on the way there.  They had a swimming pool with a bar - full liquor license.  What to have?  Their choices were Bud Light, Bud Ice, something called "BL" and "Michelob Ultra", which was explained to me as being a "premium beer".

You know, it's funny, but I can go down to the wholesale club and get a case of the "beers of Mexico - Tecate, Pacifico, Modelo, Modelo Negro, Dos Equis, Doe Equis Amber.  Or how about the Budweiser/Stella sampler?  I mean, this ain't rocket science.   It was pathetic - I had more beer in my refrigerator at home than this commercial business had at their bar.

But there are a lot of people who look at beer as booze-fuel.  Something to quench your thirst and get shitfaced on - to be drank in enormous quantities at the lowest possible price - and these folks drink, no strike that, guzzle light beer.  Poverty of the Spirit.

OK, so you say I'm "elitist" whatever the fuck that means - some dumb-ass buzzword spouted by the likes of Sarah Palin.

Yes, I guess wanting things to be better is bad.  After all, why have Michelangelo's David when we can have Hummel figurines, the Sistine Chapel when we can have the Precious Moments Chapel? (A must-see, if you are ever in Branson, if not just for the irony factor).

And speaking which, Branson is a lot of fun - at face value or for the irony factor.  Go, enjoy, have a good time.  Just don't pretend that it is better than La Scala or the Kirov Ballet.

No, it is not wrong to like more plebeian things - even lite beer and NASCAR - there is nothing wrong with that.  But when we start to elevate them above the better things in life and say, "No, this crappy beer is better than a fine single-malt scotch!  Ignorance is better than Intelligence!  A Chevy Malibu is better than a Mercedes!" all we are doing is lying to ourselves - deceiving ourselves, and dragging our own society down.

There is a time and place for everything.  And not every meal need be gourmand, of course.  But that doesn't mean we shouldn't strive to be better, for chrissakes.  To just declare mediocrity as the epitome of living and then call it a day strikes me as just giving up on civilization.  It's like saying, "Oh what the fuck, why bother with anything that smacks of effort?"

But more to the point, it misses out on financial opportunities.  For the brief (very brief) time we spent in Plains, Georgia, we saw maybe one or two dozen tourists stop in.  And they all did the same thing we did - scratch their heads and then move on.  Average stay, 20 minutes.   If you want to run a tourist business, you have to provide a reason for the tourist to stop, to linger, and to spend.

And that takes effort - effort to look at your own business and see through the clutter that has accumulated (all the souvenirs that didn't sell and thus accumulate like bad pennies) and then realize, "Hey, this place looks like shiite.  No wonder business sucks!"

But alas, few businesspeople do that.  It is easier to blame the economy or even the customer for their plight.  Stupid customer!  Not wanting what we're selling!  Don't they understand that they have to buy my crap so I can make the mortgage payment?

Some day, any day, I dream of taking a tour somewhere, and seeing a beautiful vista and beside is a small sign saying, "nice cafe with a pleasant view and compact but interesting wine list, 100 yards ahead" - and then sitting down to a beautiful vista, an interesting but inexpensive bottle of wine, and a nice light meal.

I doubt I'll find it.  At least in America.  Hot dogs wrapped in tin foil and a stale bag of chips is "what the tourists want" - according to the locals.  Poverty of the spirit!  You can charge a heck of a lot more for better - and Americans have demonstrated an enormous appetite for better.

This is the reason GM went bankrupt while BMW is the most profitable car company on the planet.  People in this country have a lot of money and want nice cars.  And Mercedes and BMW, among others, are selling them.  GM kept moving downscale with its products - cheap plastic interiors, bland inoffensive exteriors, and then wondered why we didn't want to buy their hot dog wrapped in tin foil.

Perhaps I'll find it this summer in Canada (doubtful, but they will have Poutaine).  Maybe Europe - with the wonderful English Pubs with their hand-pulled pints, the Germans and their beer gardens, and the French with, well, just about every damn thing.

Why can't we have that in America?  Instead of McDonald's?  And Crap?
Newer Post Older Post Home