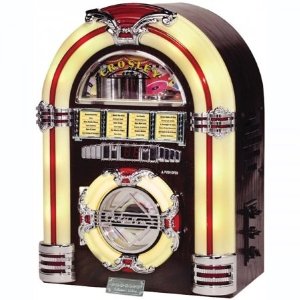 You got a license for that Jukebox, mister?
You would think, living in a "Red State" that it would be a land of unfettered Capitalism and a Randian style paradise.  Think again.  Hard.

Both Alabama and Georgia have passed onerous immigration laws that are burdening the State's employers and farmers - traditionally Republican voters.  And this presents a great opportunity for Democrats to win an election.  Teabaggers and Mexican-haters don't vote - and they don't even work - and no, they won't take a job picking melons if our migrant workers leave the State.

And the result of this genius-thinking and pandering to the Xenophobes of the South is that crops are rotting in the fields.  Perhaps it is time we let the smart people run things for a change?  Instead of Governors with names like Barbecue purveyors (Sonny Perdue) or Unfinished Furniture Salesman (Nathan Deal).  Maybe it is time for Georgia to elect a Democrat?

Georgia has a lot of nonsensical regulations on the books, and instead of getting rid of them, our fair Governor thinks what we need is MORE government intrusion into our lives.  This bozo can't figure out the water deal, or how to balance the budget - but we can sure beat up on Mexicans!  Pandering to the Klan vote, no doubt.

I was in Savannah the other day and saw, on the side of a jukebox, a license issued by the State.  This was too much for me.   Why on God's green earth does a jukebox need to be licensed?  This, in a Red State?  I expect such nonsense in Gotham City, but in Georgia?

But it is the law:

Amusement machines are defined as machines of any kind or character used by the public to provide amusement or entertainment whose operation requires payment or insertion of a coin, bill, or other money, token, ticket, or in part, upon the skill of the player, whether or not it affords an award to a successful player. Any business that maintains amusement machines must have a license and stickers for each machine on the premises. The license and stickers are renewable annually.


I have a proposal for you, Nathan "Let's Make A" Deal:   How about you live up to all this fiery rhetoric about decreasing regulation and helping businesses in the Peach State, and spend more time eliminating laws from the books instead of creating them.  Make the State code thinner, not thicker.

The solutions to our problems don't lie in economically lynching Mexicans.  And we certainly don't need the staggering tax revenues from Juke Box licenses.  Get rid of all these layers of bureaucracy - don't create more!

Because frankly, living in Georgia is just like living in a Bigoted version of New York - only with slightly lower taxes.

And at least the New Yorkers are up-front about it.  They worship big government as the end-all to the Nation's problems.  At least they are not hypocrites.

If you want more Government, then register as a Democrat - or Socialist.  But you ain't a Republican!

Or perhaps what Republicans used to be has changed... into some sort of Xenophobic Palin nightmare.
Newer Post Older Post Home