The Kids Are Alright! 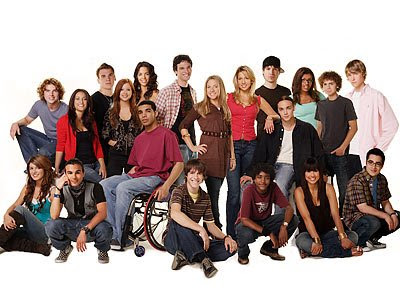 Weird thing:  I am a middle-aged guy blogging about saving for retirement.  Who are most of the people who have followed this blog?  Young people.  You know, the kids are alright!


"Kids today.  You know, with their freaky hairstyles, tattoos, body-piercings, and their underwear sticking out.  What is up with that?  I swear, I just don't understand what is up with this new generation!"

That's what I hear a lot here, on retirement island.  It is hard, when you are older, to understand youth.  What they want out of life seems strange to us.  Mostly, however, what they want is what we wanted out of life at that age - a chance to live independently, to find love, fun, perhaps a little sex, drugs, and rock and roll, along the way.  And perhaps someone to settle down with for the long run, make a little money and retire someday.

And I don't think that has changed much - except that the deal we are leaving the 20-somethings of today is perhaps not quite as nice as what I had - and certainly not as good as what my older siblings got.

No really.  Listen.  These kids today are getting a raw deal - and they still have an upbeat attitude.  You gotta hand it to them.

When I was college-aged, it was during the last major recession (worse that this one, if you can believe that) in 1979.  There were few jobs available, but the "Big 3" car companies had a monopoly share of the market and "foreign cars" were actually made in foreign countries.  And GM had a program then to pay your way through college.  Those were the days.   GM can barely afford to make cars, these days.

But even back then, college wasn't too expensive - compared to today.   Student loans were actually a novelty.   Since then, college costs have risen at double the rate of inflation for a couple of decades.  And the end result of getting an education and becoming a "professional" such as a Doctor or Lawyer ain't what it used to be.   Today, the professions are a ticket to the middle-class, not to wealth.

And in my elder sibling's generation, college was even cheaper.  Yea, they had that whole war thing to deal with, but hey, if you were in college, you got a deferment, so you could protest.  And we didn't have crack back then - or AIDS.  Free love, free drugs, and hardly any consequences.  And you could graduate with a liberal arts degrees and get a job with a big company as a salaried employee almost right away - if you were willing to get a haircut.  But to hear those boomers tell it, they had it rough!

The kids today are facing much lower expectations than we had.  But since they don't know any better, they think they have a pretty good deal.  The human spirit is so resilient - you have to admire that.  Our parent's generation got defined benefits pensions and Social Security - the latter tax-free.  My generation gets a self-funded 401(k) and the promise of cuts to Social Security and Medicare, as our system coughs, shudders and finally runs out of money.  The kids today?  They get a fuck-you on a stick.  And yet they are still cheerful and optimistic.

But then again, adversity is a good instructor, and perhaps some of these kids today are realizing that, yea, compared to the past, they got a raw deal.   But then again, it's the deal they get, and that ain't about to change.  And all you can do is make the best of a bad situation - and optimize your outcome.  Like I said, the kids are alright.

For example, I recently received this query, via twitter or cell phone text message, apparently:

That's thinking long-term, and I have to admire that.  When I was 25, my question was "how can I buy a new car and where can I score some pot?" and you can imagine how screwed-up my checkbook was.

It is a relevant question for a young person to be asking, as by the time I retire (in about 12 years or so) I hope to have close to a million in retirement funds, which, with Social Security (ha-ha) should net me about $76,000 a year in retirement money, using the 4% rule.  Not bad - fairly comfortable - a nice middle-class retirement.

So kudos to a 25-something for thinking this far in the future.   But the sick joke for these kids is, not "how do I become a millionaire" but the fact that being a millionaire in the year 2051 will not be such a big deal.  Probably half the population will be millionaires by then.   With inflation, it will be no big deal to be a millionaire.

Heck, even today, it is amazing in this era of $250,000 homes (which are modest homes in most markets) that more people are not millionaires.  In the DC area, a half-million dollars buys a starter home or condo in many markets.  A million bucks ain't a lot of money anymore, particularly when more and more people are making the mythical six-figure salary.

The world the young will live in will be markedly different than the world we live in today.  And I say this with the benefit of hindsight.  In 1973, we would write primitive game programs on a time-shared PDP-8 computer (with 4KB of hard-wired core memory, made as piecework by old Italian ladies in Maynard, Massachusetts, knit by hand, one bit at a time!).  We would sit around and do bong hits and think, "Man, someday, everyone will have a computer and can you imagine all the cool shit we'll have?"

And this has come true, to some extent - and things we never envisioned have come to pass (both good and bad).  And the advice of an older generation was often off the mark in many regards.  As I noted before, most of my elders - even teachers and college professors - pooh-poohed Software as a career (Even the Patent Office struggled to recognize it as a "Science" until recently).  Taking career advice from anyone over 30 is risky.

So it is tempting to say the kids today have their head up their ass, with their crazy music and styles.  But on the other hand, the world they inhabit will be a different world - one of their making - and we will all be safely taking a dirt-nap.  So giving advice to young people - specific advice on careers and the future - is risky.

But there is good advice my elders tried to give me, that is still true today - advice that was often too vague or was mostly ignored - and that was to save money, consume less, and accumulate wealth.

It was a message that for me was not emphasized enough, mostly because I came from a family of spendthrifts, not savers, who had trouble themselves accumulating wealth.

And in part, the problem was that a new technology - the television - was shouting contrary messages to our generation - the first generation to be raised from the cradle in the flickering blue glow of the TeeVee.  Our parents may have said to save and conserve, but the TeeVee shouted consumption from the get-go.

Kids today, I think are more astute that I was at their age.  Marketing has become so crass, so overt today that only stupid people of my age believe any of it anymore.  Who listens to the radio anymore?  Middle-aged and old people.  Who watches reality TV?  Ditto.  Kids are smarter, in general, than that, and I think many sense or smell marketing efforts more readily than our less media-savvy older generation.

So how do you become a Millionare by the time you retire - which is really not an option but a necessity for a 25-year-old?  Simple.  Ignore the messages of the media that say you need to spend to be happy - that you need trendy clothes, a smart-phone, cable-TV and a leased Scion.  All that is crap and will be in the dumpster by the time you are 30 or so, maybe 35 tops.  Investments, on the other hand, will last a lifetime.   Spend a little less, save a little more.  You'll get there.

And if you are even thinking about this at age 25, you will do OK.  Because at that age, I deluded myself into thinking that I could "save later" as I was still young.  And that was a mistake.

Good luck.  You'll need it.  But I think the kids will be alright, frankly.


NOTE:  There is some controversy as to the use of "All Right" versus "Alright".  Perhaps the latter is considered by some to be slang.   "The Kids are All Right" is the name of a movie, but I think the meaning of that phrase is odd.  To me, it says that "All of the Kids are Correct" which is not what I mean - nor what I think the movie writers meant (but were no doubt corrected by a grammarian).

In American slang (and perhaps British as well) "Alright" is akin to saying "OK"  - an indication that the subject matter is satisfactory, acceptable, laudable, or desirable.  As in "this cake is alright!" - which means the cake is good, not that the cake just got all of its algebra answers correct.  Cakes do not take algebra tests.

And of course, as slang, the phrase "Alllllllriiiiiight!!!" has taken on the latter meaning - namely an acceptance of something as good or desirable, not necessarily correctness.  As in "Mom made cake tonight?  Alllriiiightt!!"

On the other hand, "All Right" means something else, to me - as in "Joe got the answers on his Alegbra test all right!"

It can also be used in another sense, "Joe got the answers on his Algebra test, all right!" - which has a nuanced different meaning, particularly if spoken sarcastically.

And of course, "You are all right" could mean that the person being address is entirely correct, or a plural group of people are all correct (all of them are correct, as opposed to one person being completely correct).  It is amazing anyone can learn this damn language, really.

And of course, there is the declarative, as in, "All right now!  What is going on here?" which really has no meaning other than sort of an attention getting phrase and verbal throat clearing.

But before you flame me on Alright versus All Right, I will defend myself with the modern view that Alright is a different word than the phrase All Right - and thus has a different meaning.  And it should, too.

I am going with the American Heritage folks.  It may not be standard English, but it gets the meaning across much better.  All right?  Good.  You're alright, you know!
Newer Post Older Post Home