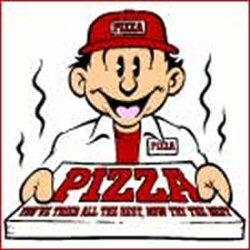 Ordering delivery food is a horribly bad economic decision for Middle-Class people.  The wealthy can afford a live-in chef.  So why does anyone in their right mind do this?


As I noted in a recent post, a slacker spends $20 on a delivery pizza and then bounces the check - which is check fraud, which is a crime, which has always been a crime, and we are supposed to feel sorry for him.  It takes two seconds to go online and check your bank balance, but apparently even leaving the home to obtain food was too difficult for him.  The end result was a court date and $750 in fines and court costs.   Some expensive pizza!  But people cave in to desire when it comes to quick-and-easy solutions.

Many Americans feel the same way - and food delivery, particularly pizza, has skyrocketed in recent years.

When I worked for Domino's to pay my way through college, the company was undergoing a huge change.  The shop I worked for was owned by one couple, and was a run down sort of shack.  The target market was college students - and that indeed was how the chain was founded, catering to college students too busy to cook (or unable to do so, in the dorm) and not wanting to interrupt their studies (or partying) to go out and buy food.

But the chain quickly grew, and soon, one of the founders bought out the other and then the chain exploded.  Just as Cable TV started out as a service to rural subscribers (who could not get off-the-air stations) and later exploded as a mostly urban and suburban service (the "wired cities" movement of the late 1970's), delivery pizza morphed from a college town phenomenon to an suburban phenomenon, and the target audience changed from students to average middle-class families.

Suddenly, it became a "norm" for Mom and Dad to say "we're too tired to cook tonight, let's send out for a pizza!"   And with this change in social normative cues (aided and abetted by the television) the trend toward delivery pizza took off.  Today, there are at least three major chains in this business - Domino's, Pizza Hut, and Papa John's.  And there are a host of smaller shops, as well as "take away" businesses.  And many suburban families order pizza, perhaps as often as once a week - maybe more.  Some folks live off this stuff.

Why is this?  And why is this a horribly bad idea on so many levels?  The first reason could be traced to Faith Popcorn's cocooning concept.  But then again, maybe not.   A more direct trace it to America's obsession with watching 4.6 hours of TeeVee a night - an obsessive-compulsive behavior which leaves most people drained and exhausted without every exercising at all.  So when the ad comes on saying "get the door, it's Domino's!" it sounds like a good proposition - after all, cooking is a "hassle" and you're "too tired" and in 30 minute - before your favorite show is over, a tasty salt-lick pizza can be on your coffee table for only $20 or so!  Be sure to order cheesy breadsticks!

Of course, as a meal, it is lacking.  No roughage, lots of salt, lots of fat, but worst of all, lots of crust - carbohydrates.  Wash it down with an HFCS soda-pop and you are well on your way to being 300 pounds or more.

But from a financial sense, it also makes no sense.  While it may be "only" $20 (although if you order those cheesy breadsticks, or "second pie at half price!" your ticket may be more) that is a lot of money to spend on food.  The logic many people use is that it is "cheaper than a restaurant" which is akin to saying Crack is better than Heroin.  But the real comparison is how cheaply you can make meals in your own home, using fresh ingredients from the store.

But this involves making different choices in life and choices are hard.  Throwing away your television is not easy to do, particularly when all of your friends are as brain-dead as you are, and think that "Dancing with the Stars" or some other idiotic "reality" TeeVee show is the height of culture.  But oftentimes it pays to distance yourself from brain-dead friends.

And please don't try to convince me that delivery pizza is some sort of special treat.  As food (from a taste perspective) it sucks - bland sauces, salty cheese, and really bad soft chewy crust.  If you want a special treat in a pizza, go to a really good pizza restaurant.  But not every night.

But here's the real kicker!  As a former delivery driver (for four separate restaurants) I can tell you firsthand that the people buying delivery pizza (and wings or whatever) are often financially stressed.  Many poor people and lower-middle-class people order delivery pizza - in fact they were our best customers.  I could go to a house in a fairly lower-middle-class neighborhood, and as I rang the doorbell, see the empty delivery boxes in the trash can from two nights ago.  Once they answered the door, I could see them hastily removing the boxes from last night.  People lived on this shit - and spent huge amounts of money doing so.

Why?  Depression is one aspect.  If you feel listless and lethargic, you aren't going to make your own food.  Drugs and alcohol are another.   Stoned people don't cook - and when they do, they set fire to the kitchen.  So they get the munchies and send out for a pie.

Does this mean you should never order food for delivery?  Well, probably yes.  Why is it that you can't leave the home to get food?  Why is your larder so poorly stocked that you can't even heat a can of soup (cost $1.00) and make a side salad (cost $1.00) even if you are "too tired to cook"?

We briefly had cable TeeVee in the 1990's as it was offered as part of a package with our Cable Modem.  And we watched it - 4.6 hours a day like the rest of the drones.  And we ordered delivery pizza, at least once a week - spent money on credit cards, rang up debt, gained weight, and then wondered why we were feeling lethargic and tired all the time - "too tired to cook" we would say.

We threw away the TeeVee and its poor normative social cues and haven't ordered a take-out pizza in over a decade.
Newer Post Older Post Home