Cruise Control - Use It! 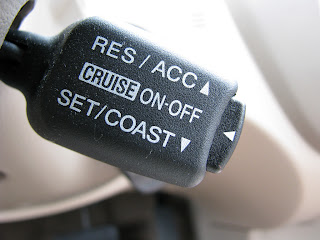 Most modern cars have cruise control.  Learn how to use yours and use it often!
Most people are horrible drivers. Most people think they are great drivers.  But I see everyday, evidence to the contrary.  There are a number of really bad driving habits out there, and I have written about them before:

1. Running or rolling stop signs
2.  Speeding
3.  Tailgating
4.  Flooring it all the way to a red light or stop sign, then slamming on the brakes at the last minute, and then stopping in (or rolling through) the crosswalk.
5.  Not looking where you are going when merging (looking behind you instead of ahead).
6.  Expecting people to "get over" when you merge, when you should Yield.
7.  Riding the brakes or slamming on the brakes on the Interstate for no apparent reason.
8.  Changing lanes or riding the left lane for no apparent reason.
9.  Poor speed control - varying highway speed by 5-10 mph or more and annoying everyone by passing them and then slowing down again.
10.  Distracted driving - cell phone, texting, eating, playing with the radio, talking, etc.

1.  They see a turn of any sort, even one designed to be taken at 80 mph or more.
2.  They crest a hill and see a long stretch of highway and a long stretch of taillights.   The compression effect of viewing makes this appear as "traffic" and they panic and slow down.
3.  Any interesting billboard, scenery, view, or other distraction.
4.  A hill - they slow down going up it, speed down the other side - the classic "deadfoot driver".   Even a small hill, like an Interstate Highway bridge, will slow them down 5 mph or more.
5.  A car ahead of them:  Someone passes them, and they slow down because "there is a car ahead of me" - never mind the fact it is going 10 mph faster and rapidly pulling away.
6.  Narrowing - if they are in an area of wide grassy pull-offs on either side, and then this narrows to a shoulder only, they will instinctively slow down.

Now granted, there are some instances when you should slow down.  But most of these situations are due to psychological concerns, not real road hazards.  And the net effect of this speed-up/slow-down habit is that in heavier traffic, it produces an accordion effect, such that when traffic reaches a critical mass, such speed changes precipitate a traffic jam, just as sugar falls out of a super-saturated solution.
And to some extent, there is really no way around this - people will be bad drivers, no matter what.  And the Highway Administration is spending Billions to develop automated highways and automated cars, to take bad drivers out of the equation.  And I know this because I've written a number of the Patents.
And already, some of this technology is showing up in cars.  Radar cruise control (adaptive cruise control) will set your car's speed, but also allow it to vary so that you are not constantly having to re-set it for traffic.  But this, in effect, turns your car in to an automated "Pusher" - and your speed is set on the basis of the cars around you (the bad drivers).
I use my cruise control all the time - even here on the island where the speed limit is 25 mph in many places.  Why?  Because the speed limit is 25 mph in many places and we have our own State Police substation that issues hundreds of tickets and warnings every month (on an island of 600 homes!).  One way to make sure you are not speeding is to set the cruise control at our around the speed limit (and I use my GPS to check this).  It is very easy to end up doing 10 mph over the limit without realizing it, when speed limits are very low.
On the highway, I use the cruise control as well, and try to seek out those lovely, three-mile long "blank spaces" between Conga-Lines.  This is the safest place to travel, as you have plenty of stopping distance and no one behind you.  When I come to a Conga-Line (or they come to me) I try to pass them expeditiously and safely, or let them pass me - again, seeking out that "blank space" in the road where no one else is riding.
If more people used their cruise control, a lot of the annoyances on the highway would be eliminated.  But alas, few do. Most people barely can drive their cars, and the cruise control "scares them".  Really, such people should not be allowed to drive at all.  But in our country, the standards for issuing driver's licenses are very, very low.
Use Cruise - Don't Lose!
Newer Post Older Post Home