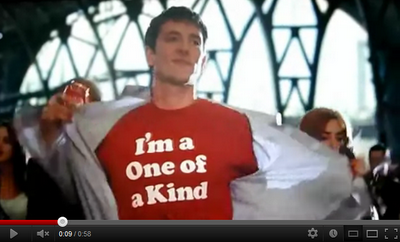 Can you be an individual while wearing a uniform?

There is an ad on the TeeVee these days – well it is on the Internet, anyway, and I think I saw it on the television at the bar the other day, which was showing the Olympics, which were as boring as watching paint dry.

The ad is interesting in that was set with a lot of normative cues, key among them that you can create your own identity as a series of brand-name choices.  You can be a unique being, merely based on your consumption, not your creativity.  So what you buy says who you are, not what you create or do - or think.  And in a society where very few people do anything of importance, this is an easy message to sell.

The ad was for Doctor Pepper, which is a sickly-sweet drink made even more sickly-sweet by the introduction of High Fructose Corn Syrup.  Drinking just one of these a day is about 10% of your daily caloric intake, and all of it in carbohydrates.   It is just plain bad for you – poison – like all soft drinks.  So, like with cigarettes, they have to “sell” you on the idea of drinking this crap, when you could just drink plain old water for free, and be far better off.

In the opening sequence, a fresh-faced young man tears off his shirt to reveal a purple t-shirt underneath, reminiscent of the “Be a Pepper!” campaign of the 1970’s.  Only, ironically, it says instead, “I’m an ONE OF A KIND!”

During the rest of the ad, everyone sings and dances and tears off their clothes (suggestive right there) to reveal similar t-shirts with similar slogans.  Since the sound was turned down, I can’t tell you what they said or sang.

But by the end of the ad, the whole street scene is given over to identically dressed people, all singing and dancing in unison, with the “I am ONE OF A KIND!” guy in the foreground.

What struck me as odd was that the tag line for the star of the ad was about being an individual, while everyone wore the same corporate uniform, sort of like the Wehrmacht, or at least the Brown Shirts.  And they all danced in unison, too, almost like goose-stepping.

The conflicting message was about individuality.  And it struck me that this “rugged individualism” message that is so prevalent in America, and is often used by advertisers to snooker us into making poor economic choices.

I mentioned cigarettes earlier, and they are probably the granddaddy of this whole concept.  “Come to where the flavor is, MARLBORO COUNTRY!” we were told, and the image was of the lone cowboy, riding the range in the manner of John Wayne - the iconic rugged individualist, scorning convention and striking out on his own.

Of course, that is sort of a myth itself, isn’t it?  Have you ever noticed that all cowboys pretty much dress alike?  I mean it is almost like a uniform itself – the Stetson hat, the vest, the six-shooters and gun belts, the chaps and boots, and of course, spurs.  No one rode the range in, say, a three-piece suit and a bowler.  Well, maybe a couple did.

This struck me again while driving the Blue Ridge Parkway. It is a popular destination for motorcyclists, as you can ride a motorcycle here without too much danger of being hit by a car (bicycles? Another story).  And motorcyclists, particularly of the Harley variety, are sold on the image of the “rugged individualist” as well – the lone biker, riding the highway in search of adventure.

But, oddly enough, they tend to travel in groups, and also dress alike, in terms of hair styles, clothing styles, tattoos, and the like.  As individualists, they are remarkably conformist.

But this dichotomy between intent versus behavior is nothing new of course – and begins early in life.  Teenagers glare at you and say, “what are you staring at?  I am just trying to express myself as an individual!”   But of course, they look like every other teenager out there – down to the piercing, tattoos, and weirdly colored hair.

They are not so much identifying themselves as true individuals, but as part of a larger social group.  They are distinguishing themselves from YOU, but cloning themselves to be more like their social peers.

Being truly unique or different, on the other hand, is sure to cause you no end of grief, at least in terms of interaction with other people.

For example, I used to have a motorcycle, a Russian-made BMW clone that Stalin had ordered built before the war.  They still make them.  It even had a sidecar.  I bought it for $4000, drove it for a few years and had fun with it, and sold it for $4500.

It was fun and unique, but the reaction from people was interesting.  People who were not motorcyclists thought it was retro and interesting, which it was.  Motorcyclists, on the other hand, were very negative about it.  It threatened them – it was not something in their vocabulary.  The Harley folks were outright hostile.  The BMW and Japanese bike people were disdainful.  No one were merely neutral.

You don’t fit into the club unless you are part of the gang – and do and say as everyone else does.

Think about it.  In the movie Wild One, which made Marlon Brando's career, were the hoodlum outlaw motorcyclists really being different or individual, or where they just copying each others' behavior?  Far from being rugged individualists, they were rather just conforming to a new social norm within their own group.

Today, the motorcycle industry has co-opted this image and used it to sell a "lifestyle" to millions.

So you have to expect such hostility and outright ostracism, if you truly want to be an individual or "be yourself"  – or just do what you want to do in life, instead of what society thinks is a swell idea (which often than not, and often involves you spending money and working hard).

People are threatened by change.  They are nervous without their normative cues to guide them.  When you don’t conform to the societal norm, they will shout you down – and not because you are wrong, but because they are worried that you might possibly be right.  And if you are right, then what have they been doing all their lives?  Wasting time and money?