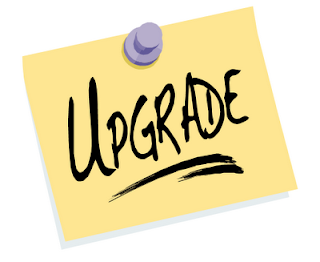 Today, we are sold things in terms of Upgrades.  But 30 years ago, this word hardly existed.

About 20 years ago, I recall attending a wedding of one of my Cousins.  My smart-alecky older brother (the pinko communist hippie scum) had a tape recorder with him, and was recording messages from various guests.

He played the recording back later on, smirking at the things other people said.  He was like that, always standing off to one side and sitting in judgment of others, as if their base instincts were somehow beneath him.

One of our other Cousins had just married, and his new wife, slightly drunk in an effort to cope with the simultaneous onslaught of 100 in-laws, was going on about how she and her husband had just bought an end-unit townhome with “all the upgrades!”

It had upgraded carpeting!  Upgraded kitchen!  And the upgrade sun nook, of course!  My brother found this all very funny, as the term “upgrade” was not bandied about back then (in the mid 1980’s) as much as it is today.  Like the word “Disrespect” it seems to have weaseled its way into the lexicon.

Back in 1970, for example, the term “upgrade” might have currency only with an over-the-road trucker, who would view such an event with trepidation and much downshifting.  An upgrade was, back then, a steep hill.

Today, the term is commonplace.  You go on vacation and you upgrade your flight to business class – or first.  And when you land, you upgrade your rental car from a compact to a midsize.  And your hotel room?  Upgraded to a suite, of course.

We are sold upgrades in every way in every day of our lives.  Would you like to upgrade that to a Supersize meal?  Of course you would.  And you don’t want a “short” latte at Starbucks.  No, you upgrade to a tall, with a caramel shot or whatever it is they eat there.  You upgrade your computer, your car, your cable TV service, and of course, your cell phone, when your plan permits it.

Or, if you buy a car, particularly a new car, they pressure you to “upgrade” to the next trim level.  You want an iPod interface?  That only comes with the SE or LE upgrade, which includes the V-6 and automatic transmission.  No one wants the “Sally Stripper” of course!

Many people chase upgrades all their lives and don’t think about how they came to be or why they are chasing them.  All they want to know is, what is the secret to obtaining an upgrade?

Tell us, Bob!  Tell us the SECRET to the FREE UPGRADE!

You see, that is what “Upgrades” are all about – an attempt by the marketing department to get you to spend more than you intended.

Back in the day, they did not have upgrades.   If you wanted to fly First Class or stay in a Suite as opposed to a room, you paid extra.  But a funny thing happened.  People didn’t want to pay extra, which meant a lot of first class seats and hotel rooms were going unsold.

How to sell these to people who couldn’t afford them?   Offer them as “upgrades” – that’s how.  They still end up PAYING more than they would have, but they feel they are getting a “bargain” and thus lunge at the deal like a Pavlovian dog.

And of course, one way to “sell” the upgrade is by the false price comparison.  For example, you are staying at the Ratisson Motel, which has 100 regular rooms and 25 super-suites.  The marketing people find that most folks will spend $75 to stay in the rooms, but balk at paying $125 for a “suite” which is just a slightly larger room with a $75 dorm fridge and a $25 microwave.

So the rooms remain unsold at $125.  BUT…..   If you tell people the “suites” are ordinarily $250 a night and then offer the rooms as an “upgrade” for $50 more than a regular room, you will sell out every suite in the place.

Suddenly, thanks to faux price comparisons, a bad deal looks like an attractive one.  And the folk staying in the suite, instead of spending $25 on breakfast, spends $25 on groceries at the local store, and microwaves their treats, convinced they are doing so much better than the plebeian “regular” guests.

And that is what the “upgrade” comes down to – status-seeking.  Just as my Pinko Commie brother enjoyed lording over the people at the wedding, convinced (or at least acting as if) he was better then they were (because he was not subject to their baser instincts) the upgrader loves to lord over those less-fortunate, or those too stupid to “buy up” to cabin-class, suite-status, or a one-car-grade-level upgrade.

AND WE ALL DO IT.  I won’t sit here and, like my Brother, pretend that I am better than you or anyone else.  We all seek status.  And when you drive a 2012 Piece-O-Chit LE, you look down your nose as those who could only afford the “SE” or God Forbid, the “Base” model.  You are, of course, better than they are – you bought the upgrade!

Today, the word “upgrade” is buried in our lexicon.  In 1989, at the wedding we attended, the word seemed odd and strange.  But since then, the marketing gurus have done a good job of selling us on the concept.

Get a frequent flyer miles card, and get free upgrades!  There is a $25 processing fee, of course, and you may have to buy additional blocks of miles.  But it’s FREE, right?

Or, maybe not.  Maybe they are extracting a few extra dollars from your wallet to sell you something that costs them nothing – an empty airliner seat on a plane that is leaving in ten minutes.  And you bite – we all bite – on this tasty tidbit or morsel, convinced we are being smart and have somehow outwitted the airline – whose airfare computer was programmed by people with advanced degrees in Number Theory, whose daily conversation would alone make your head hurt.

No, you did not outwit anyone or anything.  You were lead, like cattle, down the chute to the abattoir, to face the captured-bolt gun, which punctures your cranium, and hopefully kills you instantly and painlessly.  If not, to be hung by your heels and bled out with a quick knife-thrust to the jugular.

That is the nature of Upgrades.  It is baiting behavior of the first order.

And what of my Cousin and his wife and their upgraded end-unit town home?  They divorced a few years later.  Perhaps she was hoping to get an upgrade.  Or perhaps he was, I am not sure.  Whatever the case, I am not sure it is worth chasing after “upgrades” in your life.

Chances are, they are just bait to get you to spend more money, over time.
Newer Post Older Post Home