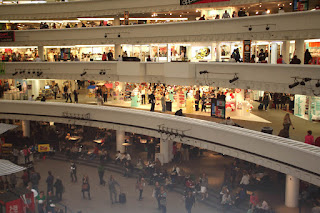 The Mart in Atlanta.  The largest shopping mall you are not allowed into.

We are in Brevard, North Carolina, which is sort of a tourist town.  Strike that, it IS a tourist town.  You can tell a tourist town by a number of factors.  One is that it has a lot of people from out-of-State visiting there, and two, there are a number of locals grousing about “all those tourists” even as they earn their living from the tourist trade, directly or indirectly.

And of course the smiling local Real Estate Agent, with her perfect hair, will sell you a vacation home here – or a permanent one, so you can become a “local” (vesting period, two weeks) and then grouse about all the “tourists” as well.

These sorts of towns require some sort of festival of sorts, and here it is the “White Squirrel Festival” based on the prevalence of white squirrels in the local arboreal population.  Apparently this is considered quite unusual, although I remember at Syracuse University we had these black squirrels on the quad, that were small and had shiny black fur, and very thin tails.  Come to think of it, they could have been rats.  I am not sure.

So, everything has a white squirrel theme, and we are all very amused by it, or at least supposed to be.  We’ve decided to play along.

Another thing a tourist town needs is an “anchor”.  Just as a cheesy shopping mall from the 1970’s needed an “anchor” store, such as a Sears or Dey Brothers (department store), these tourist towns need some sort of anchoring event or institution to start the whole ball of wax going.  And here it is the Brevard Music Center, which is pretty well-known and worthwhile coming to see.  There are performances of opera, classical music, plays, the like, by both professional and student performers.

But getting back to Main Street, you see the other de rigeur aspect of the tourist town – the shopping district.  These are the sort of areas that men generally avoid and women love.  And the local activities guide lists “shopping” as an “activity”.

Now, you know already without even me saying, what they sell in these stores – cute stuff, potpourri, scented candles, pocketbooks, jewelry, and of course, the t-shirt that says you’ve been there.   And it goes without saying, that each boutique and shop makes generous use of MAN-AWAY™ Spray (see my posting on that subject).

And you might very well wonder where they get all this crap.  After all, it all seems alike, right?  Do they get it out of a catalog, or what?

Well, you are right, it is all alike, no matter which tourist town you are in, because the owners of these little shops all get their stuff from the same source.

And I’ll let you in on the secret, as I have been to the Mecca, not once, but three times so far.  The shopping Allah would be pleased.

I am talking about the Mart, of course.  Or more specifically, “America’s Mart” which is located in downtown Atlanta.  The original was in Chicago, and I am sure there are others around the country.

If you want to sell jewelry, scented candles, or Christmas ornaments, this is the place to go to meet the people who wholesale them.  You can place your bulk order and even cash-and-carry some items.  Purses, leather goods, watches, furniture, stained glass, sculptures, pottery – you-name-it, they have it.

And once you’ve been to the Mart, well, you can’t go into a gift shop within a 300-mile radius and not see the same merchandise.  And you give the shopkeeper that knowing smile, as you know that those kicky bracelets by the cash register are marked-up 150% from wholesale.

Can just anyone go to the Mart?  No, of course, you have to be in “the trade”.  But that doesn’t stop some folks from sneaking in.  Some ladies we met had badges (you have to have a badge to get in, of course, and there is a hefty entrance fee!) and on their badge is their name and the name of the company they work for.  Maybe I am jaded, but I doubt that “American HVAC Contractors” is buying jewelry for resale.   Rather, these ladies are using their husband’s business as a cover for a little wholesale shopping spree.

They have tried to cut down on this a bit, by limiting the “cash and carry” trade.  At the end of the Mart, many wholesalers sell off their display inventory to the trade, which was always a chance for retailers to pick up some merchandise to take back, and perhaps a little bling for themselves.  But the sneakers who came in under cover were using this as an opportunity for a little personal shopping at wholesale prices.

So, unfortunately, the cash-and-carry business is limited to the “temporaries” for the most part, and not the permanent showrooms.

But you can’t blame those die-hard shoppers for wanting a good deal, right?  And this illustrates how retailing – particularly gift shops – rely on impulse purchases.   They buy stuff for cheap, mark it up a factor of 2 or 3 and hope that you wander into their shop (in the tourist destination) and say, “Gee, I just have to have this!”

And that illustrates why shopping is so hazardous to your pocketbook.  Buying things without carefully thinking over the purchase and comparing prices is, to say the least, reckless.  And unfortunately, the “must have” item at the boutique is likely to be found at another boutique down the road, in the same tourist town or at another one very much like it.

Thanks to the Internet, of course, you might be able to find the same item online.  And who knows?  By the time you get home and think about it, you may decide you don’t really need another piece of tchotchke cluttering up your living room.

Brevard is a nice place, I guess.  But as a tourist town, it does take itself a little too seriously (there are more whackjobs here than in Ithaca, NY, and that is saying a lot).  And we realized that we really don’t want to live in a tourist town, even if we sort of already do (albeit on a much smaller scale).

And no, by dint of having lived there for a few years, I don’t consider myself to be a “local”.
Newer Post Older Post Home