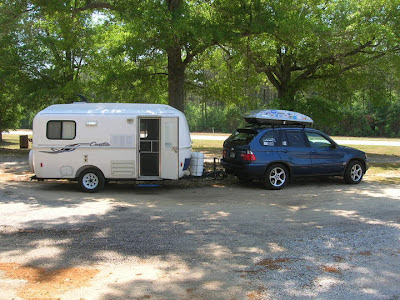 Camping on the Blue Ridge Parkway is life in the slow lane.  If you like peace and quiet, this is it.

This is our eighth trip up the Blue Ridge Parkway, and after eight trips, I still feel like I am just figuring it out.

When you talk to most folks, they say, ”I tried driving that once, but it took so damn long to get anywhere, that I just gave up and got back on I-81!”

And, sad to say, the first time I was on the Blue Ridge, I felt the same way.  It took forever to get anywhere, and the pace was so slow.   If you stopped at any of the overlooks or points of interest, well, you wouldn’t get anywhere at all!

But of course, that is the point.  To drive the Blue Ride Parkway and really enjoy it, you have to spend at least a week or so – more if you want to include Skyline Drive.  And driving more than 50 miles a day would be ambitious, to say the least.  500 miles?  Never.

But that is the nature of the beast – you come here to see things, not to travel.  Travel becomes secondary to the experience.  And unfortunately, most folks don’t get this – as I didn’t, at first.

Traveling with our small RV makes this a more enjoyable trip.  There are a number of campgrounds, built, apparently, in the 1930’s, and sized for a Ford Model A.  As such, they work well for smaller campers, who don’t need “full hookup” or indeed, any hookup at all.

If you want to watch television, stay at home.

Every morning we wake up and hike – usually only a few miles – or go kayaking, if there is a lake nearby.  The pace is slow.  And by noon or so, we are ready to head down the road – at the leisurely pace of 35 mph or so.  We have a one or two-hour drive at this pace.  We stop for lunch at a picnic area, make lunch, and go on another hike.

Most folks would rather barrel down I-81 at 80 mph and shovel a McBurger down their gullet while their car is refueling, as they want to "get there" faster.  And many of these people don't have jobs or limited vacation time - they just want to get back to their routine of watching television and bitching about the President.

The Blue Ridge Parkway is not really a roadway, I realized, but a linear park, connecting by a road.  And that right there is the fundamental difference between how some people enjoy it and others are frustrated by it.  Those who stop often and enjoy the scenery have a good time.  Those who rush through, find it a waste of time.

A word of caution, though.  If you like to drive slowly, good for you.  But it is not your job to control other people.  If someone is behind you, pull off at one of the many “balconies” on the roadway and let them go by.  There is nothing more frustrating that a long line of cars with some idiot at the lead who jams on his brakes at every leaf he sees.

Similarly, if you are going to stop, pull off the road.  People actually stop in the road, particularly on Skyline Drive, which on the weekends is populated with know-nothing government yuppies from the DC area.  They stop to look at a Deer (big deal, I have seven in my front yard) or, on one occasion, because they treed a bear (bad, bad idea).

It is a leisurely pace, yes, but it is not a ride at Walt Disney World, nor is it a golf-cart path, where you can just stop where you want to.  The rules of the road still apply, and common courtesy is still a good idea.

And if you see a deer by the side of the road, yes, slow down.  But keep going.  Stopping and taking pictures is a really bad idea – and a good way to get rear-ended.

It takes almost two days to get used to the pace.  Many folks give up after the first day and cross over to the Interstate to "make time".  Some folks - many folks, enjoy driving as an activity.  But it is very bad for you - very sedentary, while simultaneously raising your blood pressure.  A sure-fire recipe for a blood clot and a stroke.

At the other end, you may find it takes several days to get used to "reality" again - strip malls, fast-food stores, and the great mass of humanity, such as at the commercial campground we are in right now.   Most people here would not enjoy the Blue Ridge Parkway as there is no water slide or other "amusement" for the children, and it would "take too long" to drive a 30-foot trailer down the road.  The idea of walking as an activity is lost of most Americans.

And sadly, the campgrounds on the Blue Ridge are in poor repair and very lightly used, particularly during the week.  Even the "campground hosts" flee during the week, as they cannot get their cell phones to work, nor internet access.

But sometimes, getting away from it all is exactly the point.  I look forward to going back again - and again - and spending more time, each time.  I want to take more of those hikes - there are thousands of them.  And see more of it.  After eight trips, I think we have barely scratched the surface.