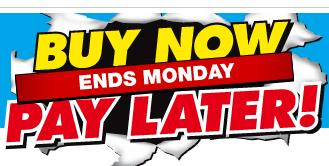 Why does nearly every merchant offer you to "Buy Now, Pay Later!"?
Well, it ain't in your best interest, that's for sure.

Shopping online recently, I was chagrined to be bombarded with offers from Amazon and PayPal to "Buy Now, Pay Later!" for my purchases.   Granted, they don't call it that, they call it "Bill Me Later!" which is the name of a Maryland finance company.

But nearly every merchant does it.  You go to Lowes or Home Depot, and they encourage you to pay nothing today, but 90 days later "same as cash!" - or even 12 months same as cash - as I have written about before.

And some people might think these things are a good deal.  "Why not, Bob?" they say, "You can get a 10% discount at Lowes - and have 12 months to pay, at zero percent interest!"

Well, that may be true.  But if you aren't getting a 10% discount at Lowes, well, you probably don't have a pulse.  There are so many promotions (military discount, for example) that it isn't funny.  Even a basic change-of-address kit from the USPS has a 10% discount card attached to it.   So the vaunted discount isn't all that great.

But what about the zero-percent interest?   Well, if you believe in the tooth fairy, this probably sounds like a good idea.  However, many merchants, if they give you 0% interest, will not give you other discounts or rebates - car dealers, for example.  So often, 0% really isn't 0%.

But sometimes it is.   And yes, you can "game the system" and pay it all back on the 364th day and pay no interest.  It still is a bad idea.

Well to begin with, the retailers and merchants are not doing this for funsies or because they like you.  They are doing it to make more money - from you.   They have armies of psychologists, bankers, accountants, and ad-men, who all know about your human nature - far better than you do.

And they know a number of things.

First, they know that if a consumer is presented with a "Buy Now, Pay Later" option, they will tend to buy more.  The reasons for this are multiple.  First, since you are not limited to buying merchandise with what dollars are in your pocket, it is now physically possible to buy more.  So instead of saying, "Gee, this model is too expensive, I'll buy the cheaper one, which I can pay cash for" you say, "Gee, I'll buy the deluxe washer, as I can pay for it later!"

And we see this all the time in car sales.  I was on a carmaker website (they are horrible!) and was "building" a car on the site.   Each option package is bundled with another.  And some of them are quite expensive.  A moonroof runs you $3000, because it is tied to the "premium" sound system (obsolete in 2 years).   But helpfully, the automaker says, "only $25 a month more!" which sounds a lot better than $3000 to cut a hole in the roof of your car.  Presented as a cash deal, it sounds unattractive.  Presented as a "pay later" deal, it sounds affordable.

So Buy Now, Pay Later encourages you to buy (when you might have said, "Gee, I'd rather keep this money in my wallet") and it encourages you to buy more than you intended, as borrowed money is funny money, whether it is a car loan, a student loan, a home mortgage, or a consumer fiance loan.

But they make yet more money out of you this way.  You see, when you do this "Buy Now, Pay Later" deal, you think to yourself, "Well, I don't have the money now, but I'll come up with later, after all, I have 90 days to pay!"   But the harsh reality is, you ain't got the money now, and you ain't gonna have it later - in most cases.  They are counting on this.

Like with credit cards, the companies count on you being weak - and you are weak.  They know your brain better than you know yourself.  They know you are susceptible to temptation and weak thinking.  That you will believe in something-for-nothing and frequent flyer miles.  That you are, basically, Grade-A, 100% all-beef CHUMP, most of the time.
And don't try to deny it - we all are, most of the time.  Just own up to it, admit it, and get over it.  And stop putting yourself in situations where your chumpsterism will get you into trouble.

So the finance companies know that more than 75% of the time, the consumer doesn't "pay it later" by the due date, but instead, lets the loan "ride", often kicking in onerous interest rates, back-dated to the date of purchase.  This is a huge amount of money added to the price of the item, and while it arguably is within your control, there is a serious chance that you will fall from grace and get socked with these fees.

OK, so maybe you aren't convinced by any of this.   If not, just think of it this way:  The reason the "Buy Now, Pay Later" gig is such a bad idea is that it is something they want you to to, and when a merchant wants you to do something, it is not for your benefit, but theirs.  Whether it is an "extended warranty" or "Buy Now, Pay Later", the merchant is cleaning up - at your expense.

And this should be readily apparent to you by how desperately these merchants fling these offers in your face.  You never asked to finance something, but they ask you anyway.  You try to check out on PayPal, and every time you are offered to "bill me later" or some such nonsense.   If you spend over $500 at Lowes, an Associate will offer you a "6 months same as cash!" deal, as they get a bonus for selling these plans (which should tell you how lucrative they are for the company).

The louder and larger the hype about something, odds are, the worst it is, in terms of a fair deal.  Consumer financing come-ons are just bait in a carefully laden trap - bait designed to get you to spend and go into debt on the most onerous terms possible.

NOTE: BILL ME LATER(tm) is available on a number of sites.  And it is the same old gag.  Pay the bill by the due date, or incur interest charges, back to the date of purchase (revolving credit).  The interest rate is 19.99% or a minimum of $2.  More information can be found on their FAQ page.  Needless to say, this is not a good bargain, and biting on this "bait" could end up costing you a lot in interest charges.

Now, I know what some of you are going to say.  "But Boooooob!  We can pay no interest for six months!  It is like free ponies!"

Yes, except that they are very tiny ponies.  You buy some books on Amazon for $100 and defer the payment and interest for six months.   Big deal.   What are you saving?  The theoretical $2.50 you could have made investing that $100?  And now you have yet ANOTHER loan to monitor, and if you miss one payment, well, the interest, at 19.99% accrues back to the date of purchase.  This will be more than $10 in interest, at the very least.

Just walk away from baited traps.  You are not "missing out" on great deals.  You are risking your financial life.