Makes You Wonder What Else They Are Lying About.... 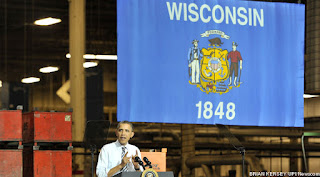 People are forwarding e-mails that say all sorts of things about President Obama that are easily proven as not true.  One e-mail claims that Obama mistook this Wisconsin banner for a Union banner.  But that never happened.  So why do people perpetuate lies?  And what does this say about the opposition's real agenda?
So many forwarded e-mails about the latest outrage that Barack Obama has supposedly committed.  But of course, they are all untrue.  Why do people believe this stuff?  Why do they forward it?  And moreover, who creates these rumors and lies?
For example, as noted above Obama supposedly mistook the flag above for a union banner.  And supposedly, Obama has signed nearly 1000 executive orders, which take over whole sectors of the economy.   Another claims that Fox News "suppressed" a video clip where Obama admits to being a Muslim (Yea, Fox News would do that, of course).
And of course, the grandaddy of them all, Obama is supposedly not a U.S. Citizen.
The list goes on and on.  Obama took off his rings for Ramadan, or whatever.
All these stories have one thing in common.  They are not true.  In fact, they are staggeringly not true, but utter fabrications.  And yet, it seems that these "stories" will not die - and I get these forwarded to me from people who I used to think were smart and at least a little skeptical.  They doubt the Encyclopedia Britannica as not being properly vetted.  But an anonymous e-mail?  It is reliable as the Oracle at Delphi.
To me, these stories smack of desperation - that the GOP has no real "there" there, and so they have to resort not to just distortions or "spin" which is part and parcel of the political process, but outright lies and fabrications, created by and spread by their political operatives.
It makes you wonder:  what else are they lying about?
Well, as it turns out, just about everything.  That cutting taxes of the top income earners by 3% will turn around the economy and reduce the deficit, for example - or cause people to hire more.  That is, as I have noted before, an outright lie.  Personal Income Tax rates do not affect hiring decisions at companies - profitability of hiring additional employees does.  Whether the CEO or owner of the company has to pay 3% more in personal income taxes does not affect the fundamental decision of whether hiring another guy in shipping and receiving will allow the company to ship out more product for that new contract.
In other words, that argument is a huge lie - and one repeated all the time on Fox News (the ones who suppress incriminating Obama videos) and other right-wing outlets.  And no one questions it, as the same boobs who forward these stupid e-mails don't understand the first thing about corporate finances or even income tax brackets.
Or take Social Security.  We are told it will bankrupt the country.  Yet the fund is solvent and the "solution" to Social Security is the same one used since it was founded - raise the cutoff rate.  Again, the same boobs who forward this crap don't realize that once you make more than $108,000, you pay no additional Social Security taxes.
Mitt Romney, who makes $22 million a YEAR, pays no more into Social Security than a young lawyer making $108,000 a year.  Actually, he pays less - if anything.  Since his income is all capital gains, taxed at 15%, he pays no self-employment taxes, which is a pretty neat trick - and proposes vouchers and needs test for the rest of us.
And the boob forwarding me the stupid e-mails?  He is struggling to get by living on Social Security and Medicare.   The very programs Romney and Ryan promise to cut are his lifeline.  They have scared him into thinking the gravy train will "run out" of money unless we stick it to people under age 55.  Turning one group of Americans against another - a keen move, ain't it?
Any business arrangement entered into based on a lie, no matter how trivial, can only go downhill from there.  I've said it a hundred times on this blog - don't do business with liars.  So when the GOP tells obvious whoppers, I have to wonder about the rest of their agenda.
That is, what of there agenda they will even tell us about.  So much of Romney's plans are like his tax returns - a total mystery.   Immigration?   "Elect me," he says, "and I'll fix it."   But he won't say how, where, when or why.  You just have to trust him.  And I don't trust liars.
And so on down the line.  We will cut the deficit but cut taxes at the same time and raise military spending, even as we are winding down two wars and costs should be dropping at the Pentagon.  How can you cut the deficit and increase defense spending?  Again, we have to elect him to find out.  It is buying a pig-in-a-poke, in the classic sense.
One thing is clear - the Romney/Ryan Agenda will cut all non-defense spending down to nothing.  And that is the spending that helps most Americans, and even American businesses.  If we don't spend money on roads, highways, bridges, and infrastructure, we will end up like Costa Rica - low taxes, but also low incomes, and crappy blown out roads and bridges, which make driving over 30 mph a life-threatening risk.   Or perhaps Brazil, where the Romneys of that country fly by helicopter and everyone else lives in a cardboard shanty and picks through trash in the dump to live.
Sorry, but when someone lies about one thing - outright lies - I have to start to question the rest of it.  And once you start unwinding the ball of string that is Romney's evasiveness and lying, you end up with nothing in the center, except a giant screw-job for the average American.
Sorry, Mitt, no sale. 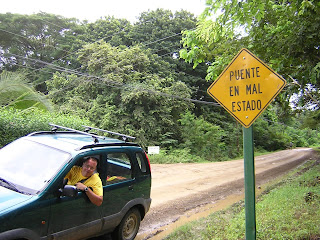 Living in a third world country means low taxes.  But it also means roads that are crap and bridges with holes in them big enough to swallow a car.  I am not kidding.  Is this how we want to live in the USA?  Cutting all spending to the bone so the very rich can get a 3% tax cut?  Or would it be a better idea to have good roads for everyone, and put people to work fixing them.  I vote for the latter.
Newer Post Older Post Home