Out Behind the Barn... 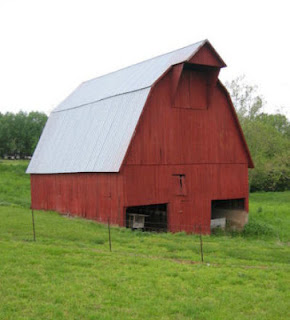 Our High School had a barn like this out back, and I spent many a Spring afternoon out there, just staring at the sky, rather than going to class.
"Robert could be a great success, if he would just learn to apply himself" one of my elementary school teachers wrote on my "permanent record."   Even back then, I had a hard time taking things seriously - or at least the things they wanted us to take seriously.

Much of school is just wasted time - study halls, gym, lunch, and "free periods" which few students used to actually do their homework (many student's parents would do their homework for them, to insure their kids got good grades - talk about missing the point!).  It could be compressed into three hours, if you think about it.

One friend of mine actually accelerated his high school career, graduating at age 16 as an "emancipated minor" - illustrating how much the curricula could be compressed.  But he had special family issues that dictated he get out quickly.  When I asked if I could do the same thing, I was told, no, not for me.

For me, goofing off has always had an attraction, and this is still true today.  Owning yourself and owning your own life are things that few people get to do anymore.  This is not to say that doing nothing is desirable, only that doing what you think is important is.   And let's face it, most "jobs" out there are about as time-wasting as High School.   Donuts in the conference room, to listen to some middle-manager drone on with a power-point presentation on how we should all be "more productive" and "work smarter, not work harder!" is about akin to the hour you wasted in study hall or in the school cafeteria.

We all work from 9 to 5, but most of us really only spend about an hour or so, I estimate, actually "working".  The rest of the time is busy-work, filling out forms or going through procedures, or just getting stuck in meetings, office gossip, or whatever, that wastes your time.  I fail to see the point of it.

And it does fill your time - and for most people, this is the "busy life" that they lead - which leads them to believe it is a life filled with meaning.  After all, they have to get up every morning, dash off to work, fight traffic, and then in the evening dash back home to watch their favorite TeeVee shows.  Who has the time to even cook?  Busy, busy, busy!   But in reality, it is the appearance of busyness without actually being busy at anything.  After a decade of such "work" there is often little to show for it, mentally or monetarily.

There is a different way, I believe.  If you can make time in your life to truly think, and to truly do what you want to do, you can accomplish a lot - or nothing at all.  But the key is, you get to do what you want to do.   I have written before how so many people pass up opportunities in life because they have financial obligations - often trivial ones.  They cannot join a startup company because they have to make payments on a car or a house.  They have traded opportunity for consumerism - and then resent the folks who made other choices.

Granted, in many instances, the people who can "afford" to do what they want, often have a head start.  Bill Gates is often touted by the far right (in glurges and forwarded e-mails) as a "rags to riches" kind of guy.  But in reality, he came from an upper middle-class family and could afford to take risks that perhaps a person struggling to get by could not.  But even then, he made a choice to drop out of Harvard and join a struggling software company.  He could have graduated from Harvard business school and gone to work for some big corporation, and no doubt had a swell cubicle and car payments on a 1981 BMW back at the time.  And his friends would have thought him successful.

And we see this, all the time, among the middle class.  Myself, at age 34, not even two years out of Law School, I decided to hang out my own shingle and start my own law practice.  In retrospect, it seems like a ballsy move - one that the more conservative me of today would be reluctant to make.  Did I make a lot of dough?  Was I a staggering success?  I did OK.  But the main thing is, I had my own life, from that point on.  I wasn't confined to the cubicle, chasing the big salary and struggling to make the bills every month, while at the same time looking at new car brochures and buying new electronic toys.  I have friends who did that - and are doing that - and are working 60 hours a week, well into their 50's, to try to scrape together enough money to retire, in a manner they are "accustomed to".   They will need millions in their 401(k) to keep up their latte and iPhone lifestyle after they stop working - if they ever do.

But even after opening my own business, I was still caught on the treadmill, or should I say, I allowed myself to fall back into it.  We started spending, once we started making, and before long, I was back where I started, trying to hump to make money to pay bills for stuff I didn't have enough time to enjoy, because I was always trying to make money.  It was a pretty idiotic way to live.

So I chucked all that, and am spending a lot more time these days behind the barn, just leaning against a weathered board and looking up at a clear blue sky, framed with green leaves.  I did this just yesterday, falling into a profound and deep sleep.  And let me tell you, the freedom to be able to do that is far better than all the jet-skis and other idiotic consumer goods in the world.

You cannot own possessions - they own you.  Less is more.  Experiences are more important than owning things.  And owning things is never as good as experiencing things.  Hard lessons for me to learn.  Most never do.  They live a life on a treadmill and view all the crap they collect as their reward.  Pack rats operate on the same principle.