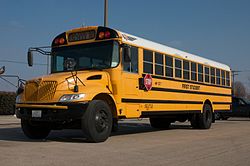 Tight School Budgets are nothing new.  But in the past, we were more willing to sacrifice unimportant things.  Today, we chuck the important to save the trivial.


When I was in Elementary school, we lived briefly in a town called Lake Forest, Illinois, which is part of the depressed rust-belt region of the United States.  No, actually, Lake Forest is a wealthy suburb of Chicago, and in fact, one of the poshest places to live.  People there are not hurting for money today, or even back in 1968.

The school I went to, Everett Elementary, was a flat-roofed 1960's building built for the baby boom generation, of which my birth year was the largest part.   My older brother went to the middle-school, which was in a creaky old fire-trap built in the 1930's.  Enrollment was up, and just finding classroom space was a challenge.  And the growing pains were putting pressure on school budgets.   There was not enough money in the budget to pay for all the school buses and school bus drivers needed to bus all those students.  And the idea of "just raising property taxes" to pay for it all, even in posh Lake Forest, during the relative prosperity of the mid 1960's, was just not thinkable.

(Today, they would just go out and buy more buses and hire more Unionized bus drivers and then raise everyone's taxes to pay for it.  Or they would cut art and music classes as "unnecessary" but of course never touch the football program.  We have priorities!)

So how did they do it back then?  They were clever, resourceful, and willing to make sacrifices.  As I noted before, much of school is "free periods" and "study hall" and "lunch".  So they divided the student body in half - with the first half having a "study hall" or "recess" in the morning before school started, and the second half having the same free period at the end of school.

The buses made two runs - an early run and a late run, both in the morning and afternoon.  For the early students, it meant getting up an hour earlier to go to school.  And for us late kids, it meant we had to wait for the buses to return, at the end of the school day, to make a second run to bring us "late" kids home.

Was it a hassle?  Maybe.  But if you think about it, it made better use of the equipment and also the drivers, who worked a full day, instead of part-time.   And it solved a budget problem without raising property taxes.

Again, today, such solutions would not be thought of.  In the small town near Aurora New York, where we had our vacation home, the brand-new high school had a planetarium.  Today, they have closed the brand-new elementary school there for lack of enrollment and combined the two schools into one, which still does not fill even that one school.  And a nearly brand-new elementary school sits abandoned and empty, along with the original 1930's high school that builders convinced the school board was "outdated" (after all, it has no planetarium!).

(This is Central New York, so I suspect the school builders, who fanned out across the State to build these monstrosities, were probably tied to the Mob.  Corruption in that State adds to the cost of everything).

And of course, those "overworked" teachers are all being paid scandalous salaries - and the school administrators even moreso.  And their retirement benefits are choking off the school budgets, as the number of retired teachers (often making more than their working counterparts) exceeds the number of working teachers, as school enrollments continue to decline.  In a parallel to GM, for every working person, there are two who are retired.

These are all challenges, to be sure.  The school system made a huge mistake building not one, but two new schools at a time when enrollments were dropping.  And the steadily increasing teachers' salaries and retirement benefits are adding to the problem.   Staggering increases in property taxes are driving more and more people from the area - and "For Sale" signs are sprouting on once-coveted vacation homes - but no one is buying them.  This depresses property prices, which drives down the tax base, which forces them to increase the millage rate yet again.

How did we get here?  Well, there was a lack of discipline on the part of the school boards.  No one wanted to institute a "Late Bus" as they did in Lake Forest.  No one wanted to "make do" with an existing school, when the builders came to town offering to build a "state of the art" school with a swimming pool, all paid for with bonds that are still being paid off.

Well, not everyone jumped on that bandwagon.  My high school, Cazenovia Central, is still run out of the same building built in the 1930's.   When we moved there in 1968, there was a movement afoot to build one of those new mega-schools, with an indoor pool and an auto shop.  And the builder, of course, pushed to get this done.  And the citizens of the town voted it down - three times.  Many called them shortsighted and said that the bulging enrollments would make things difficult for students.   But of course, enrollment flattened out, eventually, as the baby boomers graduated.  And we made do with the building we had, even if we didn't have our own pool for the swim team (if we indeed even had a swim team).

Oh, and it was viewed as one of the best schools, academically, in the region.   Amazing, isn't it?  In that hoary old building from the 1930's, kids can learn calculus.  While the kids in the nearby "mega-school" mostly learned how to make trouble and smoke pot.

But of course, you can't unbark the dog, as they say, and other school districts, who are saddled with these mega-school buildings and dwindling enrollments - as well as staggering salaries - are faced with hard choices today.  And most are taking the easy way out - raising taxes and cutting content, such as art and music, from the curriculum.  The idea of a "Late Bus" of course, would be shouted down as unsafe and inconvenient for parents.  And of course, the bus business has been farmed out to a contractor company already.  So, we just raise taxes and gut content, making school even less relevant than ever before and less of a value than ever before.

But maybe it is time to bring back the "Late Bus" - in a manner of speaking.  Maybe we need to look at ideas other than cutting content and raising taxes, all so that a few people (school builders and school employees) can make more money while delivering less.  Maybe we need to take back our schools from the insiders.