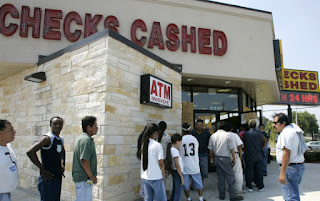 These folks are squandering what little they have by avoiding banks.


A recent article on CNN discusses the number of people in the USA who are "unbanked" - that is to say, have no bank accounts whatsoever.

Who are these people?  Mostly the poor.  Why do they not have bank accounts?  The answers are various.

Some don't trust banks, which of course is idiotic.  And when you are an idiot, you get shitty deals in life, and end up poor.  So, it is a vicious circle.

Others are denied accounts, because they had checking accounts at other banks, and wrote so many bad checks or failed to pay back overdrafts, that they are bad risks.  And yes, the Banks have their own version of a credit report to check when you apply for an account.

At our credit union, the manager told me of this problem - young people making very little money, who thought that you could just write as many checks as you wanted.  Often drugs were involved, or just plain stupidity, or both, which is redundant.    The Credit Union closed their checking accounts, but allowed them to maintain savings accounts (which are hard to over-draft) and they paid all their bills by money-order.   A pain in the ass, but better than $25 in check-cashing fees.  And of course, they are paying for screwing the pooch by not being more careful with money.   Again, in our economic system, the more mistakes you make, the more you pay, and those least able to pay, pay the most.  Stop making mistakes, like speeding to the check-cashing store so you can bounce another check.

And of course, youth is involved, too.  As a "kid" of 23, I did not keep careful track of my bank balance, and bounced checks as a result.  But the difference was, of course, that I paid the bounce fees and made up for the amount due.

Still others believe that the "fees" associated with having a checking or savings account are too high.  Of course, there are banks with no fees - but they often aren't in poor neighborhoods.  Like the pawn shop and the check-cashing store, the bank that is located in the ghetto has crummy rates and high fees, and many poor people simply believe that is how all banks work.  I have three bank accounts, and none charge fees, and some actually pay interest, albeit at a paltry rate.

Many unbanked resort to using prepaid debit cards, and as I have some Patents pending for clients in this area, I cannot comment further.  But suffice it to say, that these sorts of cards are one end-run on banks that many folks use.  You can set up a Wal-Mart prepaid credit card to accept a direct deposit from your employer, and thus avoid some fees.  It is like having a bank account, without having a bank account.

But overall, these end-runs end up being more expensive than just going to a bank.  I have an account with Bank of America, and I pay no fees.  And since they are located nearly everywhere (except Vermont), I can use a BoA ATM without incurring any transaction fees.   My Ameris accounts work the same way, although they are not as widespread.

If you are poor, getting out of the mindset that banks are the enemy is as important as getting out of the mindset that wealth is "evil".   Seek out a fee-free bank account, and avoid paying $25 to cash a check or $3 to check the balance on your pre-paid debit card.  There is no reason, if you have very little money, to squander it on stupid stuff like that.  $25 buys a lot of beer.

Check out ALL the local banks - and credit unions.  The latter usually have no fees and can help you out if you have had trouble with a bank account before.  A simple savings account may be a good way to get you in as a customer, so you can cash your paycheck without paying any check-cashing fee, or even have it automatically deposited.  But read the rules - many savings accounts, such as as BoA, do not allow more than a limited number of deposits and withdrawals per month, as they are for savings, not checking.

And if you get a bank account, monitor it like a hawk.  Bouncing checks and other idiotic nonsense is not only expensive, it can add you to the legion of "unbanked" in this country, which will cause you to slide further down the food chain.
Newer Post Older Post Home