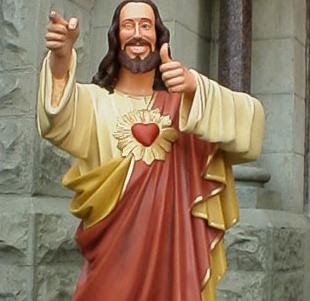 Is religion just a way of dealing with the stress of our own mortality?

I was reading an article recently about stress and anxiety and one passage struck me as very astute.  The author, some sort of psychologist, mentioned in passing that we all have an underlying stress or anxiety over our own deaths.

I thought about this and it struck me that is one reason why we have religions and why religion is a natural part of the human existence.  It is a way of dealing with the ultimate stress in life, by putting time and energy into a belief system which makes life seem worthwhile to live.

Death is, of course, horrifying on a number of levels.   Teenagers love to go to horror movies as they are young and death seems like a far-off thing.  Older people are less entranced by horror shows as they are living them in real-time.

Death is horrific on a number of levels.   First is the inevitable decline and decay of the human body over time.  We get old and quite frankly, horrifying.  If you don't see a good friend or family member for a decade or so, the first thing you think is, "Gee, they've really gone downhill!" - but of course our friend or family member is echoing the same sentiment.   Getting old isn't for sissies, as they say - it can be incredibly difficult.

The second horror show aspect of death is the messiness and pain of it.   Unless you are one of the lucky few to die in your sleep or be crushed instantly by a 3-ton hydraulic stamping press, you are in for a real fun time as your body shut down or some disease or illness slowly and painfully kills you off.   Some fun, eh?

The third aspect is the prospect of what happens next?  Do we just stop existing or is there some sort of afterlife?   Most people find comfort in the latter prospect and thus tend to believe it, even if they profess to be atheists or whatever.

The fourth aspect is the sense of loss - felt more by the living that the dead.   When someone dies, well, gosh darn it, you miss them.   When our greyhound passed away this year, we had been through the first two aspects of death - seeing her lose her health and faculties over time and the messiness and pain and discomfort of her actual demise.   That was horrific enough.  But the hardest part was in missing her and having memories triggered over little things, time and time again.   When you really love someone, it is hard, as you miss them terribly and they aren't coming back.

For people you don't care about or don't like, well, this is less of a problem.   By the time my alcoholic Mother died, it was more of a relief than anything.  Finally we were safe from knife attacks and 3AM phone calls.  In a way she did us a favor - by making her persona so toxic towards the end, we didn't miss her too much, and the grieving we had done for the Mother that was, we had done long ago.

But getting back to religion, one reason we find the need for religion, I think, is that we want to make some sense or meaning of our lives, and also comfort ourselves as we face this horror show that is life - and death.   By believing in Jesus or Mohamed or Moses or Buddha or whoever, we feel there is some grand meaning to our lives - some sort of master plan - and that our existence isn't just some brief flare that sputters and burns out.

(And of course, that is one problem with religions.  There are dozens of mainline religions in the world, and each has dozens of sects within it.  Each sect believes that all other religions are false and that theirs is the only and only true way.  If so, a lot of people - the vast majority of the planet - are going to hell.  So if you go the religion route, be sure you pick the right one!).

I have noted before that most of us live lives that are relatively bereft of any meaning.  We are born, we are raised, we work, we retire, and then we die.   Our existence on the planet has little or no greater meaning in life for the most part.  A middle-manager in a corporation is pretty interchangeable.  What most of us do for a living is not really that important and could be done by someone else.   When we die, and everyone who knows us dies, it will be like we never existed.

Some folks find this prospect depressing.   I find it liberating.   It is just a fact of life, frankly.   How you perceive it is up to you.

(Some folks find solace in rearing and raising children.  This is, indeed, one way to become immortal, provided you do it correctly.   The vast majority, it seems, sort of have litters of children and treat them indifferently, and then wonder why they are estranged from them later in life).

But for many, religion puts life into a framework.  It makes the individual a part of a greater good.   And while many find religion to be a bunch of hoo-doo hooey, perhaps there is a nugget of truth to this.   Maybe your life when viewed in the abstract seems pretty pointless.   But yourself, as the cog in a greater machine, is part of a greater whole.   Your asinine opinions and beliefs, by themselves, mean little in the greater scheme of things.  But as part of a huge human computing system that comprises our society and our planet, perhaps creates something that is greater than ourselves.

So yes, all that money you spent voting in "America's Idol" actually meant something, sort of.

Religion taps into this.  As an individual maybe your life means little.  As part of a larger organization of beliefs, it is something far more powerful.  Even atheists, who decry the excesses of religion, in fact make a religion of non-religion.  Their goal in life is to make the world a better place by abolishing religion - the same goal some of the religious have by making their religion universal.

Still others try to make themselves immortal through fame and fortune.  If you become famous - or infamous - you live on forever.    Others still work their whole lives, building a business or a career, making that the centerpiece of their lives in an effort to drown out the deafening silence in their lives.  These are not necessarily bad things, but often wonderful and fine things, if they make themselves happy in the process.

Myself, I try not to worry about it too much.  I am not sure that there is an afterlife, but if there is, it is not predicated on whether you obeyed the will of other people here on Earth.  That just seems like too pat an answer crafted by people hoping to accumulate power in this life.   The long and the short of it is, within the next 20 years or so, I will find our for sure.   So, I had better put the next 20 years to good use, rather than obsess about the end game.

As for religion, it seems to me to be an organic aspect of humankind.  Every civilization and race on the planet has developed - either in conjunction with another or independently - some sort of religion to explain the world, what happens when you die, and how the world was created.   It seems a part of human nature to look for answers to questions that cannot be answered rationally - why are we here?  What is consciousness?  What happens when we die?

In that regard, the atheists have an uphill battle.   Since religion is an organic part of the human existence, it will be hard to eradicate, if not impossible.   In fact, only by making atheism a religion of its own, will they hope to make any real inroads at all.