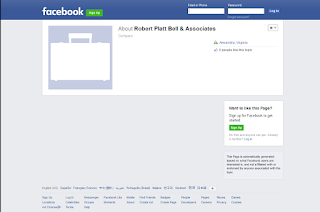 Facebook has created a web page for my now-defunct business, without my permission or authorization.  What the heck is this all about?  Click to enlarge.

About a year ago, some idiot put up a Facebook page about Fibromyalgia and started staying really hateful things about people who claim to have it.  He taunted them and tweaked them and tried to troll them.   He then linked to my entry on the topic, leaving the impression that I was somehow affiliated with his hateful actions or endorsed his bullying.

If you read my article, it only asks the question as to whether Fibromyalgia is a real disease (and indeed the guy who came up with the name for it says he no longer believes it is).  The guy on Facebook, on the other hand, was taunting people and calling them "fakers" just to get a response.  And sadly, Facebook allows (or allowed) people to anonymously set up "groups" like that with no accountability.

Well, it didn't take long for the pitchforks and torches to come out and people started sending me threatening e-mails and whatnot.  I tried to make clear that I am NOT on Facebook, and not only that, I think all "social media" is for idiots and morons.

I will not taunt or insult you for thinking you have Fibromyalgia.  I will however call you a fucking moron for even having a Facebook page or going on Twitter, Snapchat, or whatever.   Social Media has been one of the most evil and corrosive things to ever come out of the Internet, as it has turned into a haven for lies, mis-truths, misdirection, and addictive-compulsive behavior.  And let's not forget ISIS recruiting.  It has not liberated us as the Internet has promised to to, but enslaved us to checking our "smart phones" every ten seconds to see "updates" to our "feeds" so we can swallow marketing messages and lies (I am being redundant).

By the way, "feed" is something you feed cattle.

A lot of people think otherwise.  What is the harm in Facebook?  Putting up pictures of your kitten or the meal you just ate?   The problem is, it becomes a compulsion.   It also becomes a race to see how you can make your life look better than other peoples'.   The reality of course, is that like television, Facebook just causes you to get depressed as your "real life" cannot even come close to being as good as your online life appears.  So you try to make your Facebook life even more fabulous and the cycle continues - a downward spiral.

I got a weird solicitation phone call the other day from a 757 area code number, which turns out to be a source of a lot of telemarketers, including those IRS scammers.   It was to Mark's phone, though, and they asked for me by name.  So I searched online with my name and his number and I found that there is a Facebook page for "Robert Platt Bell & Associates" in "Alexandria Virginia" - a subchapter-S corporation I abolished over a decade ago.

I had never created such a page.  Again, I am not on Facebook.  What the fuck was going on?

It appears that Facebook will create pages based on what people are searching for and thus they created a Facebook page for me, without my knowledge or consent.   This is utterly fucked up.

A small disclaimer appears at the bottom:

"This Page is automatically generated based on what Facebook users are interested in, and not affiliated with or endorsed by anyone associated with the topic."

I mean, if you want to destroy your life through Facebook, knock yourself out.  But to drag other people into it?  That's just sick.

Not only that, people can create "pages" this way and then post all sorts of derogatory content on them without the person involved even being aware of it.   I only became aware of this page by accident.

If I was on Facebook, I could contact them to protest this page.  A lot good it would do.  If an individual tries to hijack your identity, they have a form to fill out, where you put in the offenders "ID" and a copy of your driver's license and they will remove the page.

But since this page was created by Facebook itself apparently I have no recourse.   Very odd.

Just once again, for those slow folks out there (who are on Social Media, and thus slow), I AM NOT ON FACEBOOK OR ANY OTHER SOCIAL MEDIA.

Any site that claims otherwise is lying.   And links to my blog are not endorsed by me, and since I don't go on Facebook, I have no idea who is linking to my blog.