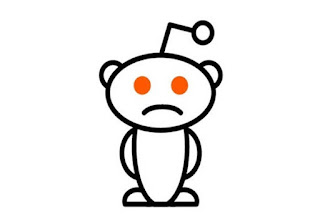 A reader suggested I check out the website "Reddit" which has made a lot of news lately as being the home of a lot of "alt-right" hate speech and Trump supporters (I am being redundant).   The site is designed to allow people to submit links to articles from other places on the Internet and then they are up-voted or down-voted to see what ends up on the "front page" of Reddit in sort of a Wiki-like manner.

As you might imagine, this model is fraught with problems.   You can program "bots" to vote up or vote down certain articles in order to promote stories or dampen others.  The Trump supporters are accused of doing this, and some believe these "bots" are coming out of Russia.   In response, Reddit tweaked its algorithms to dampen the effect of "bots" or try to detect when they are being used.   But of course, this leads to charges of censorship.

There are also many "subreddits" - thousands of them - covering everything from video games to online gaming to discussions of games and controversy about gaming.   I am being facetious of course, but it does seem that the vast trove of data on Reddit is mostly related to online gaming, and that every day, the "front" page has a lot of gaming-related posts.   You start to get a picture about the demographics of Reddit users from this.  Young.  Male.  Lonely.

And of course, Reddit was the home (at least in part) of the "gamergate" controversy where some gamers lashed out at female game designers because, well, I frankly don't give a fuck darn.  It was about the silliest "controversy" that ever existed, but for some reason, people were taking the opinions of 14-year-old "gamers" with dead seriousness.

Prior to that, Reddit was also host to "watching [black people] die" - a nice subreddit that had links to videos of black people being killed.   This was removed, of course, as being racist.  But they still have a "sub" for "watching people die" which links to videos of people being killed.  Fun stuff.  This is shit that is really bad for your mental health.  Fortunately, you don't have to worry about your kids seeing any of this, as they have to click on an "I am 18 or older" page to get in, so they cannot access the site (the sarcasm light is ON).

It also had other subreddits that were virulently racist, homophobic, misogynist, and whatever.   They still have a subreddit for rape apologists who "take the red pill" and live in the "real world" where women are sex objects to be used by men for their own needs.   Again, you see the sort of demographic they are pandering to here - fat slovenly gamers who spend all day staring into the blue glow of a computer screen and never get laid.

Reddit has tried to clean up its act - jettisoning its most odious subreddits.   It is after all, owned by (through a shell company) Conde Nast, the famous publisher who would never dream of putting "Watch [black people] die" in the New Yorker.   So they had to finally go in and clean out the worst of it, out of sheer embarrassment, even if the click-through revenue was strong.

And speaking of revenue, one way Reddit makes money is by allowing certain "viral" posts to float to the top of its septic tank.   It is no coincidence, but you will suddenly see dozens of postings about a new movie, clothing item, video game (natch), or other product or service flood the "front page" and even other subreddits.   These are structured not to appear too obviously as advertisements.

For example, when the movie "Dead Pool" came out (which appears to be some kind of superhero movie), Reddit was flooded with postings, not about the movie, but the marketing for it.   For example, a teaser billboard was posted and discussed.  And it worked.   I was made aware of the movie and the comic book which I had not been aware of before.   But the sudden flood of postings was too coincidental.  Since then, I have noticed a pattern of postings nearly every day, relating to some new product or service, and it can't be all that coincidental.

Reddit has already demonstrated that it can control what reaches the front page when they shut down most (but not all) of the Trump Spam that was being upvoted by bots.   And what appears on the front page, oddly enough, isn't always what gets the most "upvotes" for some reason.   They control what appears, either manually or through algorithms, so clearly they could easily allow a paid advertiser to put their spam on the front page if they chose to do so.

The upvoting process does allow outsiders to influence content, and there have been allegations that the Russians are trying to manipulate world opinion against the United States.   Actually, these are less allegations than statements of fact.  Psychological Operations have been going on for decades between our two countries.   We each try to psyche the other out by manipulating public opinion, just as corporations do to influence consumers.

And on Reddit, it seems there is a steady drumbeat of bad news in general, and in particular, bad news about the United States.  If you click on "news" or "world news" you would think the United States was the worst country in the world.   There are a lot of links to articles from The Independent which is a slow-loading tabloid website from the UK that delights in reporting stories that make the US look like a third world country.   If you read only The Independent, you might come away with the impression that crime is rampant in the US, with blood running in the streets and that our government is corrupt and venal and vile.

And sadly, many people here in the USA would agree with that last statement, which is sad, as our system of government, even with its flaws, represents the apogee of civilization since the dawn of mankind.    You have to look carefully at the history of the world and also look carefully at how 90% of the world lives before you pass judgement on the USA.   Oh, sure the people in Sweden have cradle-to-grave socialism.   But they have their own internal problems as well, that are usually not reported on in the US press.   But outside of the West, life is not so sweet.  And we should think long and hard before we discard democracy based on a spur-of-the-moment feeling.

For example, today the Dow Jones Industrial Average shot up 100 points on better than expected earnings.   You'd think this would make the front page of "news" but it does not.  Instead, you are treated to depressing stories about crime and police shootings and other "America is Awful" sort of crap.  It is not that some of these stories are not newsworthy or even untrue, only that they dominate Reddit and good news is, well, just not shown.

Because of all of the above, I find that Reddit is less than useful.  It is little more than a propaganda machine, trying to tell you how to think, what to buy, and who to vote for.   What's worse, it seems to be easily manipulated by outside forces to achieve their own ends.  In that regard, it is even worse than MSN or YAHOO.  MSN just keeps trying to sell you a "surface" and Yahoo a new car.

But the most important thing is that like most Internet websites, discussion groups, and social media outlets, Reddit fosters mental depression in its readers.   If you spend a lot of time on Reddit, you will get depressed over time.   Like any other online group, it is filled with trolls and haters and flame wars.  Spending any time there at all will only insure that you end up feeling empty and sad.   The articles that they collate as "news" or "the front page" are hardly representative of real life, unless you spend 10 hours a day behind a gamer console and view the world outside your darkened bong lair as an evil and maleficent place.

So no, I don't think Reddit is really "the front page of the Internet" or even a worthwhile site to visit.
Newer Post Older Post Home