Has Buffett Lost His Mind? 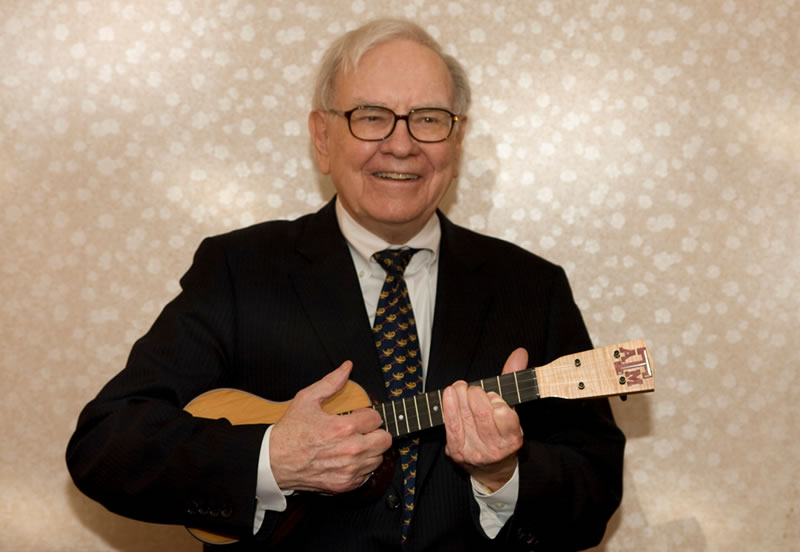 Has the Oracle of Omaha succumbed to dementia?

I mentioned before that there are really no gurus in the financial industry.  Rather, there are people who get lucky and once they get lucky, more opportunities are offered to them.  People look to the guy who made the lucky picks as being some sort of "Guru" with a special insight into the financial industry and laud him with accolades.  But in reality, he is mostly guy who just got lucky, not someone with special smarts or insights.

As Warren Buffett put it, "the first billion is the hardest" because you have to earn it.  Once you have billions - and control the billions of other investors, as he does, you have weight to throw around, and you can influence the outcome of events, rather that merely investing and hoping to get lucky.   When you have billions, you can buy a stake in a company to the point where they have to give you a seat on the board, and oftentimes, listen to what you have to say - such as to divest the company or sell it.

You and I, with our pitiful 401(k) accounts don't have that kind of voice.   We invest and hope we get lucky - investing (hopefully) in a number of different things and using time to our advantage.

Warren Buffett made history mostly by doing what most people call "Common Sense."  Rather than chasing after the latest this or the newest that, he invested in mostly old line companies that he felt were undervalued, and held onto them for the long term.  Rather than pursuing extravagant short-term profits, he was more interested in long-term payouts. And the strategy has been successful for him for the most part.

In a recent posting, I pointed out that the smartphone market has matured and saturated. The gangbusters sales of the last decades are starting to taper off, as everyone now has a smartphone and conquest sales are few and far between.  At this point it is mostly replacement market sales - people replacing broken or outdated smartphones.  It is not like the old days when no one had a smartphone and they stood in line overnight to get one.

You can have a smartphone that is two three or four generations old and it's perfectly serviceable. There's no compelling need to change up to a new phone and thus the sales are starting to taper off or at least flattened.  This is not to say sales will tank, only that we won't see the exponential growth we saw in the past.  And we saw this same pattern in the computer industry.  Once everyone had a PC, well, there was no compelling reason to go out and buy one the next day.

Compounding this problem is the migration away from contract plans.  More and more people, such as myself, are subscribing to pay-as-you-go plans, in which you pay a monthly fee for service but are not obligated to a long-term contract.  It's a lot easier to buy your phone separately rather than to pay a monthly fee and get a "free upgrade" for a new phone every so often.  People are realizing that these "free upgrades" were anything but free.  Rather, the cost of the phone is folded into the cost of the plan. Who wants to pay a cell phone bill that is as large as a car payment?

Combined, these factors mean that there is no "must have" need to buy the latest and greatest smartphone.  Maybe you think that facial recognition or fingerprint recognition is a must-have feature, but the rest of us are not so sure.  Certainly, down the road, when I upgrade my phone after I drop it in the toilet, I'll buy a phone that might have these features.  But I'm not really that excited about seeking them out or throwing away a perfectly good phone to get them.

A reader points out that Warren Buffett is buying Apple stock like mad - and wondering why I am so negative about the smartphone business.  After all, if the Oracle of Omaha is buying Apple stock, then they must be doing something right!  But this only makes me wonder whether Warren Buffett perhaps has gotten too old and is starting to lose his way.  I live on a retirement Island and see what happens to older people as they age. And dementia is a very tricky thing. It sets in slowly and you don't even notice is happening until it is too late.

Warren Buffett made headlines today by buying Apple stock - driving it to a new all-time high. Warren Buffett made his fortune by buying low and selling high, not by buying high and selling low.  So is very unlike him to buy a trendy stock like Apple just as it is peaking in price.  Either he knows something about Apple the rest of us don't - such as the introduction of a new "must have" product that will take the world by storm -  or he is losing his mind.

And I'm not sure which one it is.  I'm highly doubtful that Apple has some new "must have" product in the pipeline that we will all run out to buy next week.  I think the days of people standing in line overnight, sleeping in sleeping bags, waiting for the privilege of buying something, might be far behind us.  And in fact, perhaps those lines were seeded by shills and plants from the company in order to hype the product.  You have to be pretty dense, in my opinion, to wait in line overnight just to be the first person to buy a consumer product that will be available on the internet at discounted prices within six months.

And I think you have to be particularly dense to pay two or three times as much for a product than you need to.  And that is sort of the business model of Apple. The Apple iMac computer cost two grand - almost 10 times as much as a comparable PC.  Apple iPads cost easily double or triple what generic pads cost.   Apple iPhones, including the new iPhone X cost 10 times as much as the Samsung Galaxy 4S that I'm dictating this on.

That's an awful shitload of money, in case you haven't noticed.  And an awful lot of Americans are complaining they don't have any money.  American's debt levels are at all time highs, yet their funding of their 401(k)s are at all-time lows.  Unemployment is an all-time low, but wages are stagnating and inflation is increasing.  This is a perfect storm - a perfect shitstorm.  But more about that in another posting.

Warren Buffett said he was going to retire by now, and appoint one of his associates to be his successor.  That was a few years ago, and apparently had a change of heart or lost faith in his anointed heir.  Since then, he seems to have had trouble finding someone to take over the business, and perhaps this is a sign of mental deterioration.  He wants to hang on to the levers of power until the bitter end, even as he drives the entire machinery off a cliff.

Again, living on retirement island, I get to see the effects of dementia up close and personal.  And no one going through dementia realizes they are going through this.  They even have a name for this process, it's called "pre-dementia" - the slow dissolving of your mental faculties as life progresses. When I was a kid we used to call it "hardening of the arteries" or "getting senile" as old men became grumpy and more set in their ways over time.

It is something of a stereotype, but it is indeed true. I see a lot of older men on our island sitting at home, isolated, spending hours each day watching Fox News and screaming at the television.  They become more and more whacked-out as time goes on, and Fox News certainly is not good for your psyche or soul.

And I wonder if the same thing isn't happening to Mr. Buffett.  Perhaps he feels isolated in his own Fortress of Solitude.  You would think he would be anointing a successor to take over the business, and transferring power by this pint, but perhaps everyone around him appears to be a toady or perhaps even a threat.  The guy who seems to want the job the most probably is trying to pull a fast one.  Paranoia sets in.

In this background, I wonder where he's going with this Apple buy.  Does he think Apple has a lot of headroom in this business to make increased profits above and beyond what they are already making? Does he think that the stock price is poised to inflate even further?  What new product do they have in the pipeline that we all have to buy in order to make this stock pick worthwhile?

Or has he merely lost his mind?

I guess time will tell. But from a personal standpoint, I can't afford to risk my future and my retirement on tech stocks and what-if scenarios.  So, I won't be buying Apple stock anytime soon, and quite frankly I'll likely be liquidating the remainder of my Berkshire Hathaway Class B shares shortly (I already sold half, when the stock went up 100% in value).

I just don't see how Apple fits the "Buffett way" of doing things - finding undervalued companies that can be turned around and increased in value for the long term.   Apple already is at the peak of its game, and at best, will stay even over time.   I doubt their market share will eclipse that of other smart phone makers, and in fact, it sort of has remained flat for some time now.

UPDATE:  Maybe this is what Buffett sees in Apple - not phones, but services.  We'll see.  My gut reaction is that Apple Pay might be a thing, but others will likely (and are already) joining in the fray.
Newer Post Older Post Home