Spotting Raw Deals By How They Are Presented 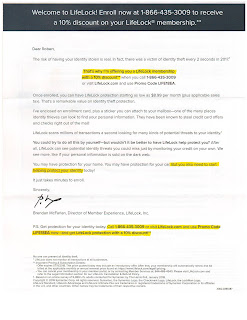 When a letter arrives insinuating you already signed up for something, do you think it is going to be a good deal?  Click to enlarge

One of my favorites quotable quotes has to do with how things are marketed to you:

Any business relationship predicated on a lie, no matter how trivial, will inevitably go downhill from there.

Liars play their hand early.  When you answer the phone and someone says "how are YOU today?" they are lying to you, as they really don't care about how well you are doing.  When you get a piece of mail that says "urgent!" when it is just an ad, or is faked-up to look like a tax refund check or something important - to get you to open it - they are lying to you.  When a commercial says you can "lease a new car for $199 a month!" and you get down to the dealer and realize it will cost far more than that, they are lying to you.

People who lie to you at the get-go aren't going to become more honest over time.  Just walk away from deceptive advertising, practices, and come-ons.  Every time you send business to people to operate this way, you encourage more people to do it - and drive out of business the few honest people left.

Simply stated, if someone misdirects you from the get-go, no matter how trivial the misdirection is, you are likely to be misdirected again and again.   Take the initial shenanigans as a warning sign and walk away.

I was at my massage therapist the other day and a letter came through the mail slot while he was working on Mark.  The letter looked like an official letter from the IRS, with the same fonts, odd blocks and numbers and "2018" in large numerals in the corner.  But it wasn't from the IRS or any other government agency, it was from Personnel Concepts, which is a company that sells you those "labor law" posters (which you can get for free) by using scare tactics to insinuate you will be sued out of existence and fined by the government, if you don't buy one of their posters.   My massage therapist didn't have any employees, so he clearly didn't need the posters at his workplace.   But according to the BBB report and other reports online, this doesn't stop them from calling businesses and using pressure tactics to sell.

This card from Personnel Concepts also looks like a government form.

Do people get taken in by this?  All the time.  When I started my business, I got a letter from the company (or one like it) and was genuinely concerned that I was in legal trouble - and I'm a lawyer!  The research power of the Internet wasn't available back then (websites were just becoming a thing in 1994).  I re-read the document again and again, and finally realized that it was a for-profit company selling posters I could get for free.

It isn't illegal to sell posters that are free.  And technically, it isn't illegal to send you a letter or postcard telling you of the dire legal consequences of not complying with the law.  Maybe legal, but ethical?   Your call.   The problem is, of course, some lower-level flunky at a company sees this, or Mom in her herb shop, and sends off money to these folks, convinced that they will be fined by the government if they don't.

But scare tactics and misdirection make sales.   And good-natured people (such as churchgoers) can be incredibly gullible (well, they do give money to the church, so I guess that marks them as patsies right there).

But there are other forms of misdirection that you can spot that are usually red flags of shitty deals.  You get an envelope that looks to be hand-addressed (and maybe is!) but on closer examination, is a carefully crafted computer facsimile of handwriting.   They know you throw away junk mail, but would not throw away a letter from a "real person."  You open it up, and it is junk mail.   Throw it away at that point.  They tricked you already - they've shown what kind of people they are.   It ain't gonna get better from here.

Sometimes, these letters even come with a post-it note attached, with fake handwriting on it.  Or, as in the letter above from LifeLock, fake highlighter markings - plus the implication that somehow I have already signed up for this service - when I have not.  Is LifeLock a scam?  Who knows?  Who cares?   All I know is, I don't need "10% off" to lock my credit reports, when I can already do that for free, or for a small ($3) fee at the most.  $8.99 a month?  In a negative-option deal?  No thanks!  The way they couched the letter - and the envelope it came in, were all I needed to know.

That and how they used fear to sell the service.   Your life is about to be stolen!  But of course, these "identity theft" things are all overblown - the statistics are skewed because any credit card theft is now cataloged as "identity theft" even though the consumer doesn't lose a penny in the deal.  Real identity theft - where someone opens a bank account or takes out a loan in your name, rarely occurs, and when it does, 9 times out of 10, it is a family member or friend who does it.   And no, you are not liable for some idiot bank loaning money to an impostor.   It may take time to straighten out your credit report and deal with collection agencies, but it isn't quite the end of the world.

(Note also that the web is full of cheerful "Consumer Advocate" rating sites that cheer on Lifelock.  Are these fake?   You decide.  The only real one I could find was on Consumer Reports, and they were pretty neutral about it - pointing out that you can freeze your credit pretty easily yourself, and that there are other monitoring services out there that are free).

It is like the annualcreditreport.com site.  Not heavily advertised, as it is a government requirement.  But the one that charges money?  They have funny commercials and a neat jingle!   The free one is the better deal, of course.  But many people go for shiny trinkets and loud noises - with predictable results, of course.

The local car dealer sends me mailings with a car key attached.   Come on down to the car dealer, and if the key fits the car, it's free!   But you know how that sort of deal works - they get you in the door and work you over until you leave with a big honking SUV and $1000-a-month car payments for seven years (at 15%, natch!).  The free car is "won" by the dealer's niece.  She needed a car for college, anyway.

The best deals sell themselves, without a lot of hoopla or noise or distraction.   The loud car ad on the television blaring about "great lease deals!" followed by 30-seconds of speed-reading disclaimers should tell you by its very self, that it is a shitty deal.   A three-page ad for a prescription drug you don't need for a condition that likely doesn't exist, followed by two pages of four-print type listing all the dire things that are likely to happen to you, isn't a good deal - and you can tell that from the way it is presented.   Life-saving and life-easing medicine doesn't need to be advertised - and you should have your doctor tell you what medicine to take, not vice-versa.

But this type of advertising clearly works, as evidenced by the fact that the only mail I get these days is junk mail.   And pretty much everything advertised on television is pretty much a ripoff.

The funny thing is, the real things you need in life are often advertised very quietly, if they are advertised at all.  The grocery store doesn't need come-ons to get you to buy food.  It is sort of something you need.  Sure, they have ads and sales, but they generally don't need to use gimmicks to get you to buy something you need to survive.   The only advertisement gas stations use anymore is their price-per-gallon.   No one really cares if there is a "tiger in your tank" or getting free dishes with a fill-up.

Turn off the noise and distraction and seek out the quieter deals.   Odds are, they are the better deals around.
Newer Post Older Post Home